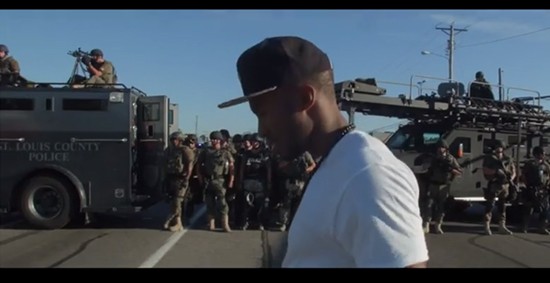 The screenshot above of St. Louis hip-hop artist Prince Ea walking past an entourage of fully equipped militants and armored vehicles looks like a staged setting out of a high-budget music video or action movie, but it's not. The startling scenery filmed during Ferguson protests is 100 percent real and so are the people involved.

In times of distress, art and music speak volumes. On Tuesday national touring artists including Wiz Khalifa and Jeezy paid tribute to the late Michael Brown, donning shirts featuring his name onstage during a packed performance at Verizon Wireless Amphitheater.

As protests and unrest continue with no end in sight, St. Louis' own musicians begin to cope through their craft. Carefully articulated thoughts come across with palpable force. Late last night, Prince Ea shared a heavy-hitting video featuring his spoken-word piece "Same Story," filmed on location in the very place that inspired it.

The video begins with Prince in front of the QuikTrip that riots ignited on Sunday night: "Policeman murders young black male. I can't say that I was surprised when I read that headline."

Later he continues, "Along with being smart, we all have to look inside and change our hearts. And that goes for white, black, ghetto, suburban, policeman and civilian. 'Cause we're all human at the end of the day. No matter what costumes we put on or characters we like to play. We're all humans at the end of the day. And if we don't realize this, then it'll be the same story next year."

Watch the full video, filmed and edited by Brandon Sloan, below.

Click through to read about and hear MME's new song inspired by Michael Brown.

"If you haven't heard, shit is getting real in St. Louis, and we truly need your help," says Muhammed Austin (a.k.a. Mvstermind) of MME in an e-mail message to the press. "The universal language of the arts will be what can close the gap of understanding."

Mvstermind collaborates with Mir, Con and Ciej for a collective MME track titled "#OpFerguson || Wave 1 & 2 (Westfall)," speaking on themes including cultural discrimination and peaceful revolution in light of recent events. Check out the full track below.

Have you heard other works inspired by Michael Brown? Please share them in the comments.