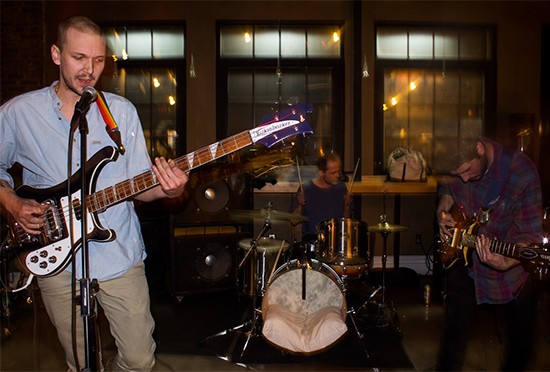 The dog days have arrived, along with a massive wave of shows. Young groups tend to tour in the first half of August, squandering their last few days before the next college semester. Because of that fact, now's a good time for concert-goers to scope out new and old acts alike. The ball has been dropped though, because I already missed what would've been the top pick for this month: Dead Rider at the Firebird on August 8. Instead of mourning the loss of a great performance, check out the band's latest music video below:

Another notable mention is

All is not lost. August still brings a wealth of gigs for fans of outsider music. From driving prog-rock to free-jazz, the schedule this month is jammed with talent. Let's explore:

Lair plays with a solid core of rock n roll, relying on a tethered layer of synthesizer to thicken the sound. There's an audible inspiration from kraut rock of the '60s and '70s, but Lair maintains a distinct rip. Using live drums and guitar to fill in the holes between colorful backing tracks, the duo plays music that's more akin to a five or six piece band, and does it with strict timing. You could call this band a cyborg - a hybrid of man and machine.

Western Forever is the latest endeavor from experimental drummer Nate Larson. Guitar riffs trail off like space rock around the pitter-patter of sharp jazz drumming. Although their songs are mostly improvised, there's an audible cohesion that commands close listening.

Kisser is set to release its follow up cassette tape to 2011's Black and Red on this night. The power trio wrecks psychedelic rock with a deconstructionist vibe, ripping apart the pieces only to slap them back together. It's a true Picasso painting of punk rock, complete with neigh-distorted bass and a guitar drenched in post-processing. Drummer Mike Herr's percussion is an added bonus, coming from a place between primal beats and subtle abstraction.

If the music scene were a high school (sometimes it really feels that way) Fielded would sit somewhere between the goths and punks, taking every chance she had to make friends with both. What Chicago artist Lindsay Powell achieves with Fielded is remarkable. Her crooning voice folds unto itself in loops while sharp beats punctuate the proceedings. Powell invokes basement post-punk of the early '80s, but does so with a pile of sequenced sound. This is audible cyberpunk. It's music to play while wearing sunglasses at night - to protect your eyes from the blinding neon lights of Neo-Tokyo, of course.

As part of a fundraiser for a future experimental show happening later this fall, Jeremy Kannapell aka Ghost Ice has organized a shortlist of St. Louis' more prolific noise players. While the show itself can't be previewed, mostly due to the fact that many of these performers will be collaborating for the first time, this show is a safe bet for fans of free-form music, improvisation, free-jazz and noise. If you just unconsciously turned your nose up at the sight of the aforementioned genres, you're probably reading the wrong column.