Wearing pajamas makes any activity infinitely more fun. Just think about how much cooler checking out library books, doing taxes or even attending world peace summits might be if everyone wore those old-timey PJs with the flap on the butt.

Imagine, then, the kind of epic party local hip-hop group Doorway will throw down with all four of its members performing in sleep pants and boxers.

As Kid 'n Play showed us in 1991's House Party 2, nothing beats a good pajama party, but Doorway aims to raise the bar even higher with its Jammie Jam on Friday, August 15, at Blank Space. With a ton of local acts and non-stop action (including a pillow fight!), the Jammie Jam surely will be one slumber party where people are too pumped to sleep.

"We are all definitely wearing PJs," Doorway's RT-FaQ tells RFT Music. "I'm going with Ninja Turtle boxers for the whole night! I'm sure some of the fellas will have fun with their choices, though I don't think any of us are going out with any ass flaps!"

"In the song I keep saying, 'They're sleeping on me' for the hook," RT-FaQ says. "When it comes to visuals for our records, we like to be different or have some type of concept to go along with it. The song is pretty fast paced, and I thought all of us having a huge pajama party would translate well to film."

The event will be more than just a concert, RT-FaQ says. Instead of showcasing one group on a stage, the Jammie Jam will feature multiple performers in a true party atmosphere focused on dancing -- a nod to those PJ-centric movies of the '90s.

"We have a bunch of our music buddies making appearances and singing songs for the crowd all night, including Netwurk, Tef Poe, Aloha, Bo Dean, Mai Lee, Allen Gates and many more," RT-FaQ says. "It's going to be an all-around party so people don't even have to stand around and watch everybody performing. We are just there to provide the music for everybody to dance to."

With all of this nocturnal action going on, surely the Doorway rappers are used to singing in their pajamas, right?

"The only time I ever perform in my PJs is in my own home while I'm rehearsing in my basement, ha ha," RT-FaQ says. "I'll make my public debut August 15 at Blank Space, and I can't wait!"

Doorway's Jammie Jam will be held 8 p.m.-close, Friday, August 15, at Blank Space, 2847 Cherokee Street. Tickets are $5 if you're wearing pajamas or $10 if you're in normal clothes. 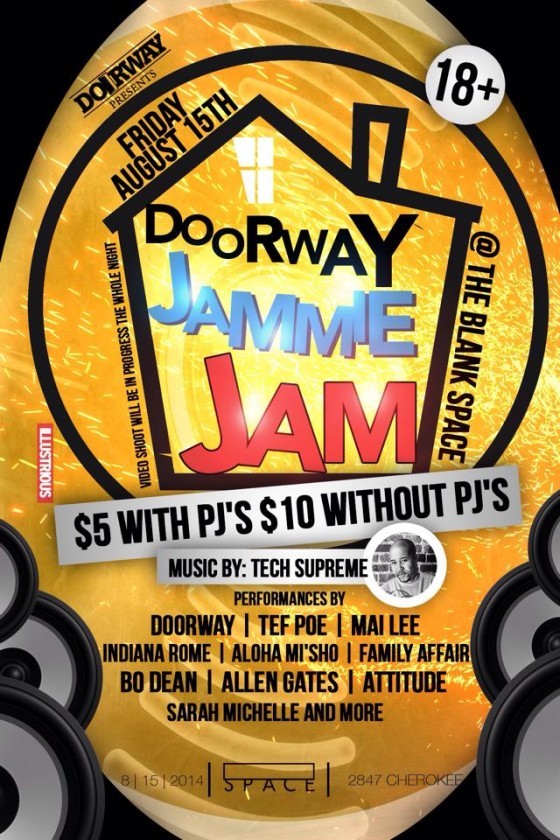