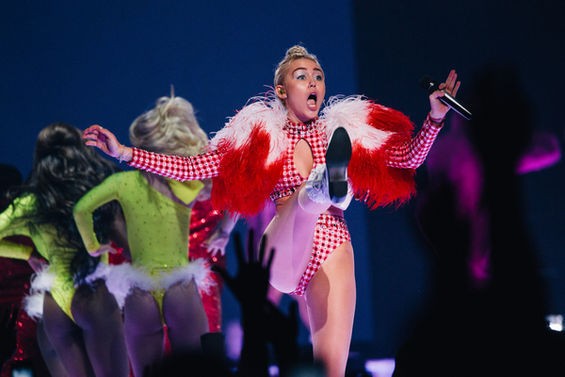 If last night's gleeful tongue wagging and enthusiastic dry humping were any indication, Miley Cyrus has definitely licked whatever ailed her this spring.

After cancelling her original April date due to hospitalization for an illness, Cyrus made good on her promise to make it up to St. Louis during last night's rescheduled "Bangerz" tour show at Scottrade Center. The former Disney star slid down a giant tongue, pranced around the stage and engaged her audience with passion, and though the show wasn't perfect, it certainly was amazing to see. From gyrating bears to shout-outs to her "hillbillies," Cyrus gave her all.

There were plenty of things that stayed with us long after Cyrus finished the show with her star-spangled, rap-country version of "Party in the U.S.A.," the only nod to her Hannah Montana days. Below, check out five things that we're still thinking about long after the confetti cleared. 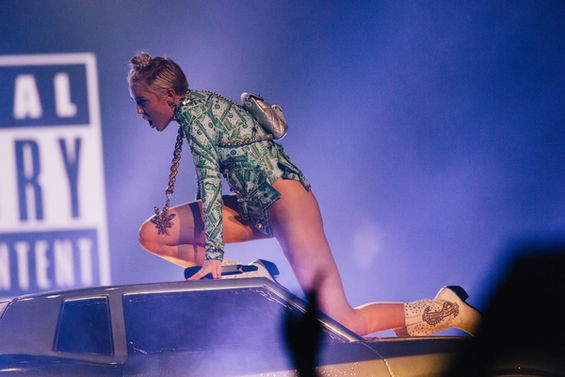 Did you go into the show wanting to see Cyrus fuck a lot of things? You got your money's worth, then! Nothing was safe from Cyrus's pelvic thrusts. Not the windshield of the gold monster truck with spinners during "Love, Money, Party." Not the really hot shirtless dude in a giant bed during "Get It Right." Not the leg of the ceiling-high wolf-dog-statue-thing with glowing eyes during "Can't Be Tamed." Not the pink-braided Lily Allen, who joined Cyrus at the satellite stage at the back of the floor Allen's own "It's Not Fair." Not the person in the furry blue bulldog costume straight out of a demented Banana Splits during "On My Own." And certainly not the monstrous hot dog topped with a saddle and suspended on cables over the audience during "Someone Else."

Nope, Cyrus was an equal-opportunity humper.

That said, the choreography in general was outstanding. It's no easy feat to dance hard and sing out without going breathless, but Cyrus managed to do it, though her voice did waver a bit occasionally.

Her voice is weird.

Cyrus' voice on studio albums is a little divisive; that gulpy intonation with the southern twang isn't for everyone. But in a live setting, Cyrus' style became even more of a burden. Amplified to the highest degree, it was hard to miss how off-putting and flat her nasal tone was during "My Darlin'" and "Adore You." Cyrus' voice was quite strong, however, during "F U" and her cover of the Beatles' "Lucy in the Sky with Diamonds."

Still, Cyrus' vocals needed to be turned way up; there were a number of songs where her words couldn't be heard over the bass or electronics or were muddied by the mix. It's impossible to expect perfect clarity in a show with so much going on, but it felt wrong that Cyrus was overshadowed by her band at many points.

Even with the constant costume changes for Cyrus and her crew, the former Disney star stayed true to the apparel that's currently closest to her heart: bodysuits. Appropriating a style that was created to make it easy for babies to have their poopy diapers changed, Cyrus sported high-cut onesies in yellow sequins, dollar bills, checkered tablecloth, white glitter and more. And we've got to give it to the woman -- her toned body does the stupid trend justice.

Those bodysuits definitely showed off Cyrus' other favorite object -- her ... well ... hoohah. No matter if she was busting out a Michael-Jackson-like thrust, seductively snaking a finger south or splaying her legs out while reclining on a prop, Cyrus repeatedly made sure that her private parts weren't all that private. But hey, if you're proud, go loud! 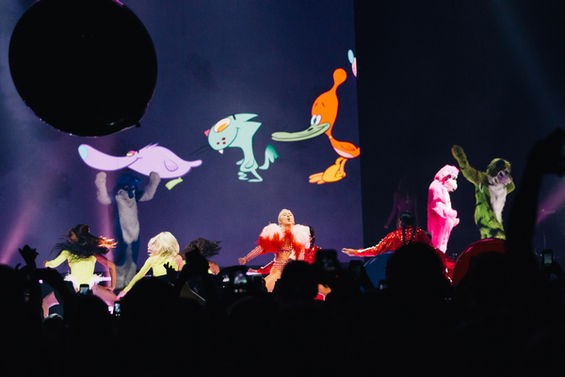 Were you dragged to the show by your girlfriend or daughter? Got a little shiny-object syndrome? You still might have enjoyed the concert, even if it was simply because of all the WTF?ness. It seems that pop tours lately have become cornucopias of stimulation, which we saw on Taylor Swift's "Red" tour last year. But where Swift's show was charming and well themed, Cyrus' effort felt like someone went to the mall and raided a Spencer's. Blacklight poster art? Check. Fake money for lots of "make it rain" moments? Check. Dancing monkeys and sharks? Check. A singing kitty in space? Check. Aforementioned flying wiener? Check. It takes major moolah for this kind of spectacle, though, and we can't even imagine how much all of this stuff cost -- especially when we consider the costume changes after practically every song and the different mechanisms that launched Cyrus over the audience.

This shouldn't come as a shock to anyone with functional eyeballs or a thirst for TMZ, but the young woman who shimmied all over the stage last night worked her ass off to put as much distance between herself and her childhood as possible. Of course, many of us end up despising at 21 who we were at twelve, but Cyrus's show and antics over the past few years suggested a deeper loathing; it was like the pot-loving, tongue-wagging, everything-humping Miley of today eviscerated her old "Hannah" persona in broad daylight and then gleefully licked blood from her fingers while asking us, "Hey, wanna see something cool?"

Still, despite constantly being bombarded by Lindsay Lohan-level news about Cyrus, St. Louis may have been a tad surprised at witnessing the change in person; after all, the city hadn't seen her since 2009 during the World Wonder tour and Cyrus wasn't really humping anything then, other than a stripper pole on the Teen Choice Awards. But after a show in which Cyrus defiled a dog, spanked Allen and spread her legs more often than an exercise instructor, we have to ask the parents of the eight-year-old kids in the audience: WHAT WERE YOU THINKING?