Hip-hop Songs About the Teenage Mutant Ninja Turtles: A History 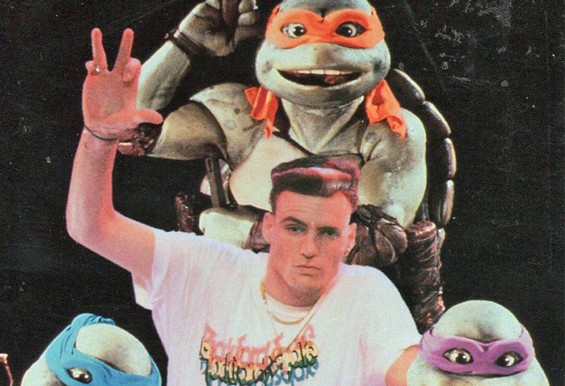 The Turtles began as a gritty comic created by Kevin Eastman and Peter Laird. It exploded into a multimillion dollar media franchise for kids due to a goofy animated series that began in 1987 and lasted until 1996.

That series led to three live-action movies in the '90s, another animated series (and another film) in the 2000s, scores of action figures -- I had about fifteen, and they'd wrestle my WWF guys -- and a concert tour. The Ninja Turtles have always been a musical bunch. And for each film and TV show, there is a new song about the Ninja Turtles. This week, a new one was released. We now have five turtle films and five turtle songs. Let's count them down.

Best Line: "Raphael: He's the leader of the group/ Transformed from the norm by the nuclear goop"

Worst Line: "They didn't say they'd be there in half an hour/ 'Cuz they displayed -- Turtle Power!"

This is essentially a 1980s party rap about the Turtles. It also helpfully recounts most of the plot of the first film, so you don't even have to go see the movie! (It made $201 million, so you probably did anyway.) This was actually Partners in Kryme's first single, hitting No. 13 on the Hot 100 -- and No. 1 in the UK. But it's a bold decision to make your first radio single as a hip-hop duo about a children's movie. The move did not pay off for Partners in Kryme.

(Note: I don't care that the "best line" is not accurate. Leonardo's the leader of the group, obviously, but any rhyme that includes the word "goop" is automatically great.)

Worst Line: "Have you ever seen a turtle get down?/ Slammin' and jammin' to the new swing sound"

It's easy to pick on Vanilla Ice's rapping, and so let's do that: This is a crime against anyone with ears. The production is terrible, the rapping is laughable and the people in the video aren't even excited to be hanging in the same bar as the Ninja Turtles.

But watch the last 30 seconds of the video for the real treat: Vanilla telling us the makers of the film told him to make this. "They told me to write, and make it Ice," he says, "And they told me to keep it clean, for the kids and everything, which is me anyway." So we can't really put all of the blame on him. It's clear Rob Van Winkle is actually a talented person: I enjoyed his gadget reports on the Today show. (As far as that program's celebrity contributors go, he's not quite as good as Jenna Bush Hager, but much better than Chelsea Clinton.)

Best Line: "They kick it, they rip it straight from the underground/ Clown around in town and make you jump around"

Worst Line: "Bust a move that makes you want to groove-Uh/ Hit you so hard like a Heimlich maneuver"

This sounds like a Digital Underground knockoff, and it proves itself as one by referencing Tupac's verse in "Same Song" in the opening lines. It's better than "Ninja Rap" -- but is, by far, the most cringeworthy of any of these Ninja Turtles songs. What's a Ninja Turtles song doing referencing Goodfellas, Groucho Marx and Frankie Lymon?! Lymon had been dead for 25 years when this song came out.

Worst Line: "Yo mama got leprosy and gold Nikes/ Yo mama smells -- like a PROBLEM!"

This song is barely about the Ninja Turtles at all. It drops a few TMNT references in lines (splinter, rats, sewers, etc.) and has a turtle-related title, but it also mentions drunkenness. What happened to keeping it clean for the kids like Vanilla Ice? Then it ends with a series of inexplicable "Yo Mama" jokes. Is the TMNT film this screwed up? Maybe I need to see it.

Best Line: "We be goin' hard, and make it look easy/ Give me the whole pie, real cheesy"

Worst Line: "Check my Rolex they say I'm the man of the hour/ All this green in my pockets, you can call it turtle power"

Anytime a Wiz Khalifa verse is the best on the track you know it's a mess. (See also: Will.I.Am's "Feeling Myself.") Juicy J's verse is pretty much just about making copious amounts of money. A good idea for a verse most any other time, but not one about the Ninja Turtles! Do they even know the concept of money? I guess they need to pay for pizza somehow.

Khalifa -- who I've figured as a secret huge dork ever since he rapped over "Schala's Theme" from the Super Nintendo game Chrono Trigger -- does the best job here. Ty Dolla $ign saves his pedestrian verse with a pizza reference.

This track's pretty much a mess. Then again, I caught myself singing the chorus in the shower while taking a break from writing this article. So it's pretty catchy, and also I'm an idiot.

Amazingly, Vanilla Ice got it right when he weighed in on this song. "It really does not fit the theme of the Ninja Turtles legend," Vanilla told GQ. "I think you have to understand, and be a true Ninja, to possess the Magic to really pull off the secret sound." He's right: A guest verse from a True Ninja (Hattori Hanzō, maybe?) is missing from this track.

Worst Line: They're heroes in a half-shell and they're green (Hey - get a grip!)

This is almost a perfect kids show theme, but it's still pretty stupid. "They're the world's most fearsome fighting team (We're really hip!)" is a great line -- it introduces the protagonists as a fearsome force, and then tells you they're pretty cool as well. But how long do you think the writers spent on the next one? "They're heroes in a half-shell and they're green" is the best they could do! That's terrible. It sucks all the energy out of it. I guess "Did you know that turtles have a spleen" was rejected.