Beau Phillips was a radio programmer at Seattle radio station KISW from 1978 to 1996, and was head of marketing at MTV for a few years. During this time, he was around some of the biggest names in music, at a time when the biz was at its financial apex.

Phillips just self-published a memoir called I Killed Pink Floyd's Pig, which looks back on his career and "all the wildness that went on backstage," as Sammy Hagar says in the book's forward.

Read about this near-disaster and other highlights from the book below:

On Pink Floyd's pig, Algie: "It took four guys to hoist Pink Floyd's pig up three stories to the roof. We spread out the pink fabric, tied down its restraint lines and plugged in the inflation machines. Voila! The pig started filling with air and slowly rose over our building, soaring 70 feet above KISW's studios. Proving that pigs can fly, Algie was visible for miles. Local TV cameras flocked to our station to film Pink Floyd's pig. It was the buzz of Seattle for a week. And then my luck ran out.

On the morning of Pink Floyd's concert, I got a 6 a.m. wake-up call from my morning DJ. He's only called me at home in emergencies. So I braced myself. 'I apologize for calling so early,' he said. Then he reluctantly added. 'It's still dark outside...but I think the pig is gone.'

By 7:45 I was a few blocks from the radio station driving like a maniac. No pig. Sweating bullets as I reached the rooftop of the building, I expected to see nothing but broken straps. But alas, there lay Algie. Looked deflated and humiliated, the pig was just lying in the gravel that covered the rooftop. For the moment, I was elated that the pig was there and not submerged in Puget Sound." 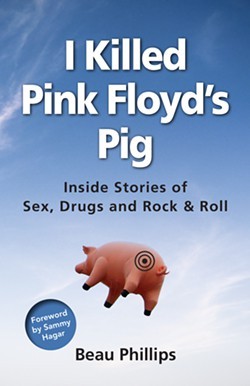 On Van Halen's champagne and strippers: "The word spread around Seattle that Van Halen had taken over KISW. Inside the studio, cake flew, horns blew and shredded paper filled the air. Without any prompting, the strippers jumped up on this console, tore their bikini tops and started grinding to the beat. The champagne was flowing and the party was rockin' until our sales manager reminded me that we hadn't played any commercials in two hours. Gotta pay the bills. But there was no way I'd stop this party.

After three-hours of full-throttle decadence, Van Halen's manager finally rounded up the band and said 'It's time to go.' Dave, Eddie, Alex and Michael left our studios in shambles and stumbled back to their limos, strippers in tow.

Back inside the station, we weren't sure what had hit us. It looked like a tornado had blown through. Champagne and cake were ground into the carpet. A layer of empty bottles, plates, paper shreds and G-strings were stuck on top. And the walls were sprayed with God knows what. It would be a hard day's night if not for our cleaning company."

On trying to impress Robert Plant: "Robert Plant was the gold standard by which all rock stars would be compared.

Our chat had been going pretty well. Now came my big moment. I was going to dazzle Robert Plant with my brilliance. So. I looked him in the eye and asked, 'Robert, there's a line in 'Stairway to Heaven' that's always puzzled me. Can you explain it?'

Eager to demonstrated my rock acumen, I blurted out, 'What does it mean when you sing, 'If there's a bustle in your hedgehog'?"

As soon as the words left my lips, I wished I could've pulled them back. Did I really say hedgehog? What the hell was I thinking? I've heard "Stairway to Heaven" a million times and know the lyrics by heart. As everyone knows, it's "hedgerow." But my nerves got the best of me, and I blurted out the wrong word. I felt my knees buckle and my face flush with embarrassment. He must think I'm an imbecile!

Plant leaned back and laughed, then shook his head. 'No man, it's hedgerow, not hedgehog!' More laughing. I only could slink away."