In Defense of Sublime 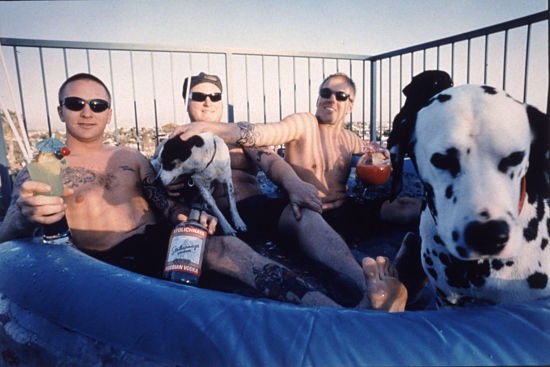 I thought I would have to wait until the 20th anniversary of Sublime's 1996 self-titled mainstream breakout album to write about how fundamentally misunderstood and judged Sublime is. I have so many feelings, probably too many, about a band whose legacy is beaten up almost as much as Insane Clown Posse's (who are possibly the most DIY music-making motherfuckers on the planet, by the way) by people who tend to lean toward the appearance-based criticism that often bashes music embraced by the working class.

But then the A.V. Club published Jonah Ray's scathing take down of "What I Got" as part of its HateSong series, and I was handed my Sublime platform.

First, I want to say that I get that HateSong as a series is supposed to be a little satirical, but in previous editions, the reasoning for not liking a song has never read like a giant misguided, misinformed anger dump on a band. Like most discussions by people who have never listened to Sublime past its handful of radio hits, this piece read like a circle jerk among music elitists. And that is boring to read. Luckily, though, this circle jerk laid out all the talking points I needed, so here are some of the common complaints about the band and why I think they are unfounded.

Third wave ska (and anything remotely close to or related to it, like Sublime) sucks I get it. People hate happy-sounding music (especially with horns) and anything that doesn't emphasize the backbeat in 4/4 time. But the third wave ska movement was a big and important one, ushering bands into the mainstream like the Aquabats, Reel Big Fish and, of course, No Doubt, while changing the way rock radio sounded forever.

Many of the third wave success stories -- like all the bands listed above -- were also from the thriving Long Beach/Orange County scene, which also birthed, uh, Sublime. Though the core of the band didn't include a horn section, "Date Rape," one of Sublime's best-known songs, did, and Brad's rampant reggae-style guitar-playing will forever link them to a style of music that defined an era.

Brad Nowell was the uncool Kurt Cobain They both came from working-class backgrounds, they both were heroin users who struggled with it until death (and in Brad's case, died from it), they both were more famous and sold more records after they were dead, and they both came into the mainstream in the mid-'90s. So why does Kurt Cobain get treated like dead royalty and Brad Nowell get the bum rap of being the lesser than frat-dude version?

Their music, though both built on punk's foundation, was different. Their songs were about different experiences and different ways of living. But the '90s were, like any other times in modern music history, filled with musicians who made very dissimilar-sounding music but were still marketed to the same audience. I grew up in the '90s, and guess what? Nirvana and Sublime were equally and aggressively marketed toward Lollapalooza ticket-buying, disaffected suburban alt teens.

What I'm saying is, to your average sixteen-year-old music fan in 1996, Nirvana and Sublime could be enjoyed all the same. I say this as a person who was sixteen in 1996, loved both bands and saw no difference between one and the other. And though I love both of these bands with all of my heart, it does suck that they have become the classic rock of our current time and are in the annoying constant rotation of mediocre rock-ish radio stations all over America. Why this only seems to sour Sublime's legacy and not Nirvana's, I don't know -- other than the fact that people love to hate on Sublime.

I should also add that sometimes, for whatever reason, Sublime lands in a listener's "guilty pleasure" category. To me, "guilty pleasure" is a just cop-out way of saying, "I am judging myself for liking the music I enjoy based on what other people think of me." Which is dumb and unrelated to the music in question. Art is art. Putting a context around what makes it cool or socially acceptable will get you nowhere, other than hiding in your bedroom listening to music so that no one finds out you like it/Sublime.

Sublime is rap rock, and rap rock sucks Few bands have been able to integrate the most basic ideas of hip-hop and rock together to create something listenable, even though so many music fans in the world love both genres and their varying and numerous branches. (See: Limp Bizkit, Linkin Park and the top of the shit heap, Crazy Town, for great examples of how this genre totally sucks.)

But Sublime was the perfect union of hip-hop and punk -- and it was definitely not rap rock. Perhaps it was the reggae influence that so seamlessly fused the band's many styles, but by combining killer samples and good beats with singable melodies and Brad's guitar, Sublime had it mastered. This perfect union was also due to the expert work of Michael "Miguel" Happoldt, the band's producer, unofficial fourth member and unheralded purveyor of the Long Beach sound. Miguel is like the fucking Rick Ruben of the O.C., doing what Ruben did at Def Jam (and with other acts, like the Beastie Boys) on a smaller scale through his own Skunk Records.

Sublime isn't punk The beauty in Sublime's catalog is its variation; punk, reggae, acoustic, sample-heavy tracks -- the band had and did a little bit of everything. And it wasn't afraid to put all of these styles together on one record. What is more punk than that?

Plus, the band's choice of samples and covers helped create the legacy Sublime has to this day. From the bare acoustic rendition of the Melodians "Rivers of Babylon" to its speedy homage to Descendents' "Hope" to the startling Grateful Dead "Scarlet Begonias" cover (heavily featuring a sample from James Brown's "Funky Drummer"), Sublime wore its roots on its sleeve. Oh, and it wrote a great song about how fucking cool KRS-One is, and it sampled Minutemen's "History Lesson Part II." Which brings me to my next point:

Sublime wasn't punk enough to sample Minutemen One of the biggest telltale signs of a music elitist is someone who thinks they "own" a band. Never embraced by mainstream culture at all, Minutemen has long been "owned" by music snobs -- which is hilarious in this context because Sublime was cut from the same working-class surf town cloth as Minutemen. Minutemen was a band from San Pedro; Sublime hailed from Long Beach, fewer than ten miles away. These bands had a lot in common when it came to singing about and speaking to their core audiences of working-class folks, so it only makes sense that Sublime samples Minutemen.

Also, Minutemen's Mike Watt makes a cameo in Sublime's "Wrong Way." So there.

Sublime was a stupid party band who sang about drugs and partying This it did do. But not in every song. (Even some songs about drug use, like "Pool Shark," were dark, bleak and real, not just fun party anthems about smoking two joints.) But for real, since when did bands not write songs about all the drugs they do? Fleetwood Mac's "Gold Dust Woman," the Rolling Stones' "Dead Flowers," Eric Clapton's "Cocaine," the list goes on. Bands write songs about drugs, and Sublime was one of those bands.

Sublime was a bunch of frat-bros making frat-bro music It's amazing how judgmental people can be of the way a band looks. Sublime definitely wasn't a bunch of skinny, commercially sellable '90s band dudes, but they sure did look a lot like everyone else on Warped Tour in the '90s. How this factors into one's music, I'm not sure. But Sublime's members not only looked like NOFX (who looked like the Vandals), they looked like your average music fan at a punk show, a regular guy with stupid facial hair and semi-spikey hair helmet. Did that change the fact that the band made incredible music? Nope.

Sublime fans suck Welcome to the world of every band ever. Every band's fans suck -- to people who don't like said band. And as a person who has been in many a band, I can tell you this: You don't get to pick your fans. Generalizing about a band based on the people who decide to like them is pretty irrelevant to the music the band makes. Unless you're ICP, and then, well, yeah. Your fans are a direct result of the kind of music you make. But the best part about ICP fans is they are kind of like Catholics: They don't really want you in their family, anyway.

Now, go calm down and listen to Robbin' the Hood, because it is really fucking good -- just like the rest of Sublime's catalog. (Or watch Sublime: Behind the Music in its entirety before someone has it taken down from YouTube.)