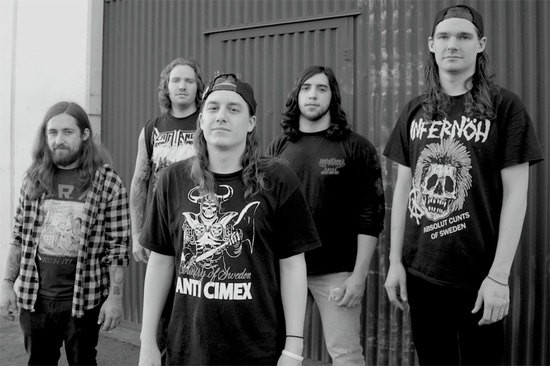 Thus ends the rider for Dallas hardcore/thrash band Power Trip, whose recent ascent hasn't left a lot of time for fleshing out a list of things the band would like in its greenroom.

"I wrote, verbatim, 'a bottle of whiskey and yummy snacks; various, assorted yummy snacks,'" says frontman Riley Gale by phone from his duplex in Old East Dallas. "This rider business is new to me."

Although it's midafternoon on a weekday, Gale is at home, unwinding with his two dogs, Tommy and Mackie. Power Trip -- Gale and Blake Ibanez, lead guitar; Chris Ulsh, drums; Nick Stewart, guitar; and Chris Whetzel, bass -- is coming off what could be considered a championship year for a crossover band. The group garnered critical acclaim for its debut LP, the cinematic Manifest Decimation, and it drew praise from various scenes. The group's tightened live show matches the hype surrounding them.

Topping last year's Manifest (Southern Lord Recordings) could prove to be difficult. At eight songs in 35 minutes, it's a tightly wound, reverb-soaked album that's catchier and heavier than most modern hardcore. Just about everyone loved it. Pitchfork gave it an 8.0/10, putting it on par with buzzed-around groups like Crystal Castles, White Lung and Parquet Courts. Besides, who talks about a band's second album as being their best?

"Have you ever heard of the sophomore slump? I think we want to avoid that," Gale says dryly.

A second LP might arrive in 2015, but he qualifies that projection: "We don't really think far in advance. I think sometimes bands can get stagnant with ideas," Gale says when asked about a follow-up.

But right now at the duplex, Gale's collecting unemployment and selling his band's deadstock merch on eBay. Like anyone who's ever been age 27, he's restless and wants to live somewhere other than his home state. He's eyeing Chicago. "I'm going to be 28 this year, and I'd like to live outside of Texas before I'm 30," Gale says. But 925 miles to Chicago doesn't seem like it will slow the band's pace, says Power Trip's booking agent, Timmy Hefner.

Hefner -- he of Chaos in Tejas, the defunct Austin punk festival -- is already filling out the band's calendar: "They're going to keep touring hard and going for it; it's not slowing down," he says. As a roadie for Austin-based Iron Age in the mid-'00s, Hefner saw Power Trip in its earliest stages and eventually put the band on Chaos in Tejas, raising its profile in front of all the weirdos who made the annual Memorial Day trek to Austin. "They were good then, but now they really know how to write songs," Hefner says of the band's five-year progression. "They crafted this awesome album."

An unsettling crescendo of guitar noise opens Manifest Decimation. It's a little post-apocalyptic and all of it is simultaneously dark and thrilling, like you're about to enter some very loud, crowded, dark space. It's like you're walking into a Power Trip show.

For any other band, all the breakdowns, grunts, reverb and solos could come very close to feeling like a buffet of retrograde 1980s thrash, where the musicians scrub out all the originality and fill in the blanks with cliches, Mad Libs-style. But Manifest's sonic depth -- much of the credit goes to lead guitarist Blake Ibanez and engineer Arthur Rizk -- is such that by comparison, records from other thrash revival bands sound squeaky-clean, safe, even, next to Power Trip.

It also helps that lyrically, there just are zero narratives about non-stop beer bonging or surfing on a sea of pizza slices off the coast of Weed Island. Defeat, doubt and rebellion appear often on Manifest, and "Hammer of Doubt," the album's final song, begins with a quotation, at first barely audible beneath a thick layer of creeping guitar:

"The world is full o' complainers. An' the fact is, nothin' comes with a guarantee. Now I don't care if you're the pope of Rome, President of the United States or Man of the Year; somethin' can all go wrong. Now go on ahead, y'know, complain, tell your problems to your neighbor, ask for help, 'n watch him fly. Now, in Russia, they got it mapped out so that everyone pulls for everyone else ... that's the theory, anyway. But what I know about is Texas, an' down here ... you're on your own."

Coen brothers enthusiasts will recognize it as the opening line of 1984 noir Blood Simple. Gale, a self-described "huge Coen brothers fan," explains its inclusion as maybe more than simply a chest-thumping, home-state shout-out in the form of a movie clip: "It captures kind of that despair that I want to be felt, and frustration about how the world is. It's not just because it's Texas, because it's kind of funny. But when you die, you only have you, and there's no one else."

Gale illustrates those themes during the band's chaotic live sets. "I don't think it's necessarily scary, but I think people who aren't used to that kind of music may think it's scary," Hefner says. "[Power Trip] are one of those bands that kind of everyone likes. I don't mean like how everyone likes classical music, but metalheads like them, and hardcore kids like them and kind of even indie rockers like them."

Much of the band's current popularity can be traced back to Lockin' Out Records, a Boston-based boutique hardcore label that's a tastemaker in its own right. Lockin' Out released Power Trip's 2011 self-titled EP -- two original songs and a cover of Prong's "Brainwave" -- and helped put the band on the map.

Label founder Greg Lockin' Out recalls that "they had mentioned having a new recording they were shopping around. I was interested, but not 100-percent sold because it's difficult for me to do a project with a band if I do not know them personally that well." After a little more scouting, Lockin' Out released the EP and with it came new fans loyal to the Lockin' Out catalog. The record has gone through three pressings.

Power Trip will release another EP with Lockin' Out this year, says the label's founder. "We are definitely trying to do another record. I think it'll happen this year for sure. It will likely be similar in format to the other seven-inch single I did for them."

Maybe they should update that rider.