The Twenty Best-Dressed Juggalos at the Gathering 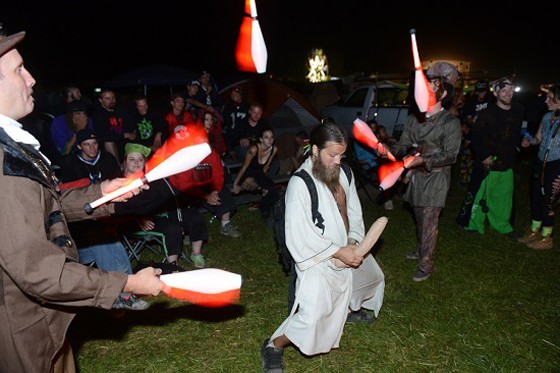 Juggalo fashion generally involves great big pants and T-shirts that were possibly purchased at truck stops. Hair is best when it is braided and aloft in the style of Coolio, and everything looks better coated in a thin layer of sticky-delicious Faygo, of course.

But some juggalos go out of their way to trot out their hottest looks for the Gathering of the Juggalos, Here, then, are the twenty best-dressed juggalos at this year's big event.

Legendary wrestler Mick Foley came to the Gathering wearing a Hawaiian shirt, sweatpants, slippers and a fanny pack. During his comedy set, one juggalo heckled him about the latter of those items, and then Foley choke-slammed him off a 40-foot steel cage.*

*May not have actually happened. 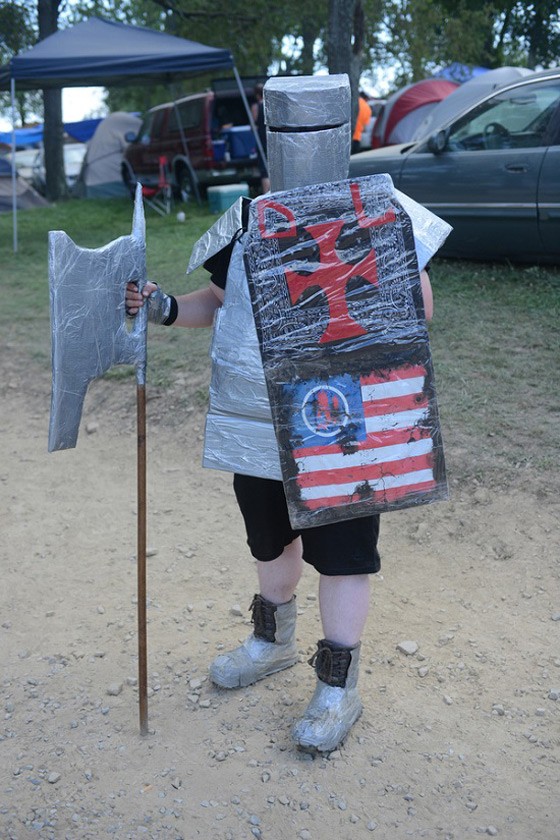 This guy stood for an extended period of time, silent and on guard, right in the middle of a major pathway. His armor is not black, but I still completely expected a Monty Python-style "None Shall Pass" at any moment. 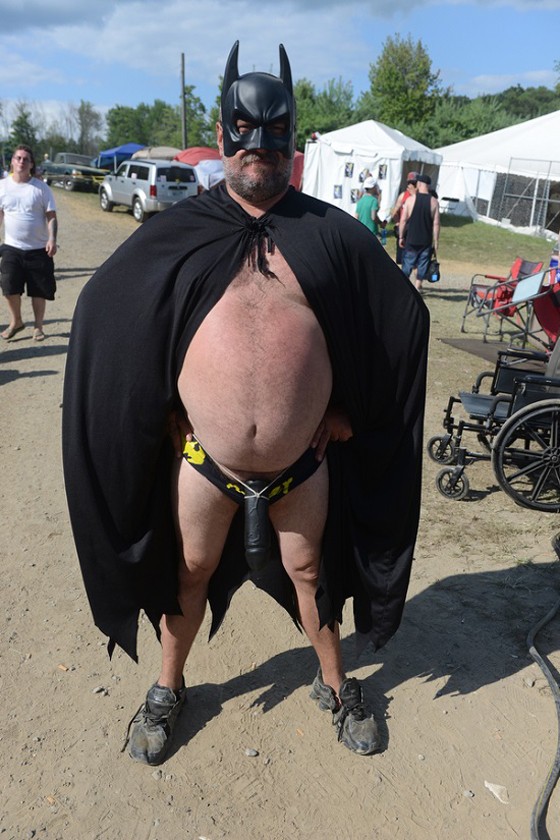 Why yes, we did include this guy, because DUH. 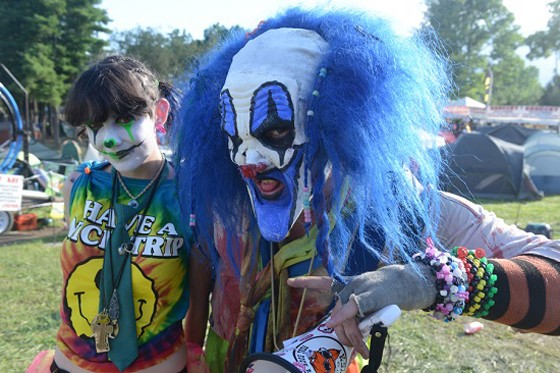 Pretty sure this is the Predator in clown paint. They don't allow weapons in the venue and therefore no one was adequately armed enough to be a worthwhile hunt, so luckily nobody had to be killed. 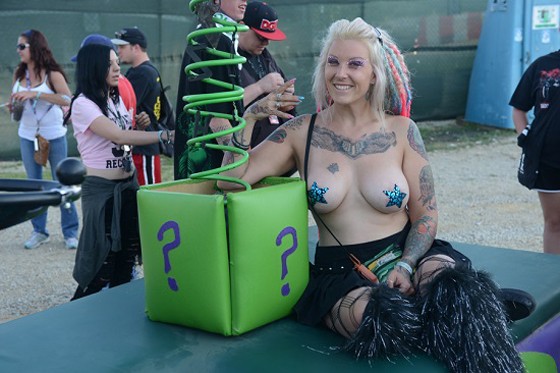 This woman actually bothered to wear pasties instead of (like most juggalettes here) just wandering around with nothing on top at all. Clearly this is a woman of sophistication. 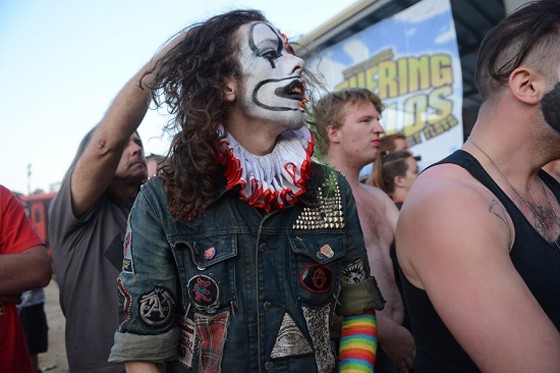 This handsome fellow is sporting a Grateful Dead bear, a Crass logo, two anarchy symbols and a Rancid patch on his studded denim jacket. Add the facepaint to that and this man successfully represents basically every underground subculture, all at once.

I'm pretty sure this is one of those shitty government scientists from E.T., taking a break to hang out with his clown friends at the Whoopty Whoop Party in between enslaving and dissecting adorable aliens.

This and "I Am A Gang Member Not A Juggalo" were the best Gathering-themed T-shirts we saw on the grounds.

It was cool of this Smoke Monster to make it out to the show. And he even wore a scary mask! How fun. 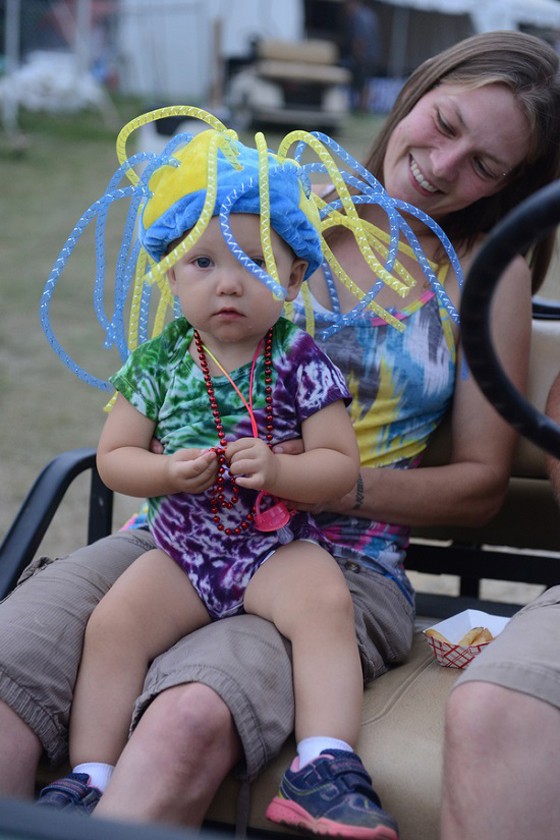 Obviously this little guy's headgear is adorable, but the pacifier, beads and tie-dye are unsettling. It is tragic to see kids getting into ecstasy so young.

Grow the gut out large enough and you don't have to wear pants at all anymore! This is a man with a plan, right here. 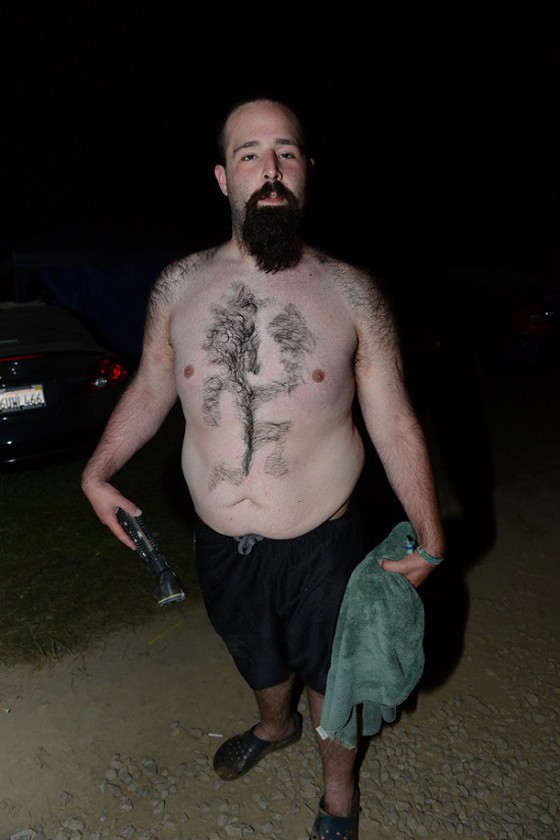 No need to drop all that money at the merch booth; this guy and just shape and sculpt his chest hair into whatever outfit he desires! Crafty.

An outfit as functional as it is fashionable.

This guy was hanging out in the parking lot. He has done so for the last seven years, while his son goes inside the event - he never goes in himself, though. Just the parking lot.  We enjoyed his understated approach to juggalo fashion.

As you may know, juggalos are known for throwing things. So for this guy to literally draw a target on his back is ballsy to the point of foolishness, but you gotta love his moxie.

OK, so they might not have the most interesting fashion, all things considered, but the Gathering's legendary Burrito Men, Bill Huntsmen and Bruce Wayne Hull, definitely have the best food here, and it bears mentioning twice. 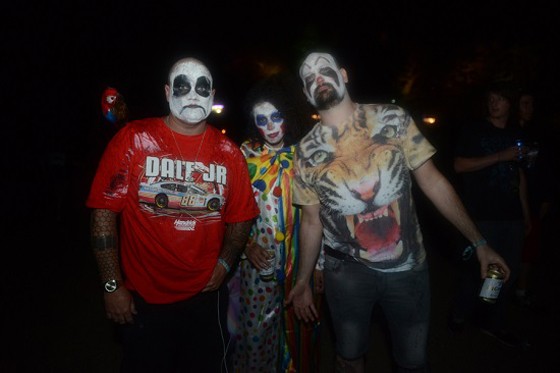 We were actually pretty conflicted about these guys. Their outfits and makeup don't come across as genuine -- we may be in the presence of impostors, here. The stock gas-station shirts, the red-painted nose (uncommon among clowns of the wicked variety), the distressed pants on the fella on the left -- all got "poser" written all over it. Also, the guy on the left has Black Flag bars tattooed on his arm.

Hard to know for sure, but very suspect, and rest assured we are looking into it. We will update this post if we get any further information.