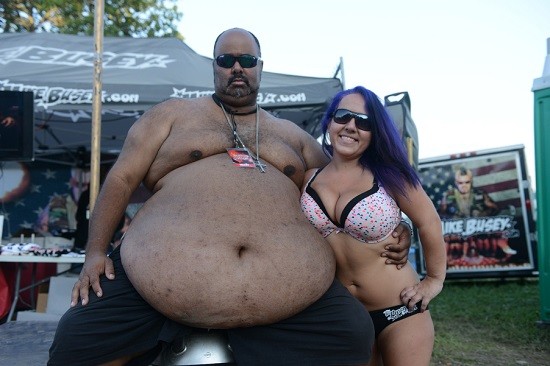 Yesterday, TMZ posted a video of a juggalo stripper giving a lap dance to the belly button of an enormously fat man here at the Gathering -- a short film actually shot by DJ Paul of Three 6 Mafia/Da Mafia 6ix fame. The video quickly went viral.

We know what you are asking yourself: Who is this man of such impressive girth? How did he and the kindly young lady in the video find one another? Luckily for you, we have the answers you seek.

The man's name is Big LA. He is here at the Gathering of the Juggalos with Mike Busey (and the "Busey Beauties"), an Orlando-based full-service party organization headed up by the nephew of celebrated actor and legendary madman Gary Busey. Together, Busey, Big LA and their beauties have been operating something of an outdoor strip club here on the grounds. 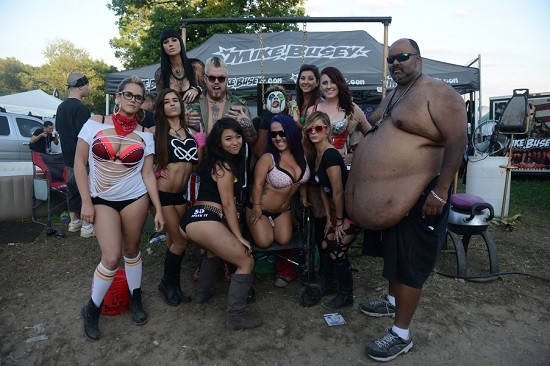 When one wanders past Busey's makeshift stripper-pole setup, one is invited to come and purchase a T-shirt. Those who do so are then ushered over to a nearby wheelchair for a gratis lap dance from the girls, who can otherwise be found pole-dancing and swinging and spraying water at one another.

DJ Paul, who shot the video, is in the mix because, in addition to performing at the Gathering this year, he is selling his own "DJ Paul's On Errthang All Purpose Seasoning" and barbecue sauce, and he brokered a deal with the Busey tent to hawk his wares. (We bought some. It is delicious.) The video he shot was but a short glimpse into what is happening around Busey's booth almost constantly.

Busey describes himself as "The King of Rock & Roll Debauchery," and his website features, among other things, a picture of Ron Jeremy taking a shit.

His home is a lakefront, 30-acre compound dubbed the Sausage Castle, which boasts a hot tub, boxing ring and outdoor tiki bar. His full-service party company offers multiple packages for interested partiers -- you can hire Busey and Big LA to come to your event, or you can take advantage of their "Rockstar Weekends" service. Essentially, you head down to Orlando and take part in a hedonistic, debaucherous party that's filled with strippers and hosted by Busey, while a photographer captures it all for your Precious Memories photo albums. From his website:

Have you ever wanted to get away and be apart of something so fucking crazy non of your friends would believe it really happened to you! Looking to break lose and get away? Have you always wanted to treat yourself? You seen the videos & pictures here is your chance to be apart of the life changing madness right here right now!!!!!

It does not fucking matter what you want! If you got the $$$$ Mike Busey & friends will make your fantasies become realities! 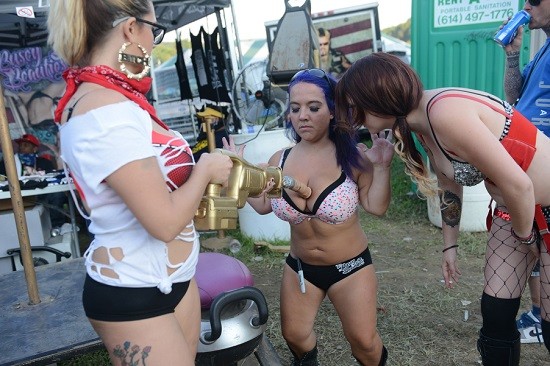 Outside of the standard-fare package, which basically consists of hanging out at Busey's house with a big fat guy and all of their scantily clad female friends, his site also claims to be able to accommodate those looking to get "really wild."

Continue to page two for the "really wild" package.

*WANNA BLOW SOMETHING UP OR SHOOT SOME SERIOUS WEAPONS?

*THE APPEARANCE OF A CELEBRITY FRIEND OF MIKE BUSEY'S

*GO ON A DANGEROUS VOYAGE WITH MANNY PUIG?

*GET A KICK ASS TATTOO?

*DIEING OF CANCER & NEVER BEEN TO WALT DISNEY WORLD?

*WANT GET COVERED IN COCO AND SPANKED WITH SUMMER SAUSAGES?

IT DON'T MATTER WHAT YOU WANT OR CAN DREAM OF:

"If you got the money, Mike Busey will make it happen!"

Despite the party facilities on site, Busey also has a classified ad up looking for roommates which claims that he only hosts one party a month. And if you're not a drug addict with "mental issues" or "social disorders," you're able to rent a room for $800 a month. You know, for any interested folks out there.

Internships are also available. However, they are not paid:

We Are Looking For A Few Good Men & Women Who Wanna Learn A Thing Or Two About The Entrainment Biz! You In School? Or Already Have A Degree? Cool, We're Gonna Make You Wipe Your Ass With That Expensive Piece Of Paper! You Will Receive A Real Life Education In WTF Really Goes On! If Your Lucky, You Might Be Able To Take What We Show You Out Into The Real World And Become Successful Like Interns In The Past......

But on the plus side:

You Might Get Your Dick Sucked, But If You Dont Earn The Right We Will Cock Block Your Ass Real Fast! You Gotta Bring Something To The Table!

More coverage from the 2014 Gathering of the Juggalos:

We Talk to the Cops at Gathering of the Juggalos