A Wedding at the Gathering of the Juggalos 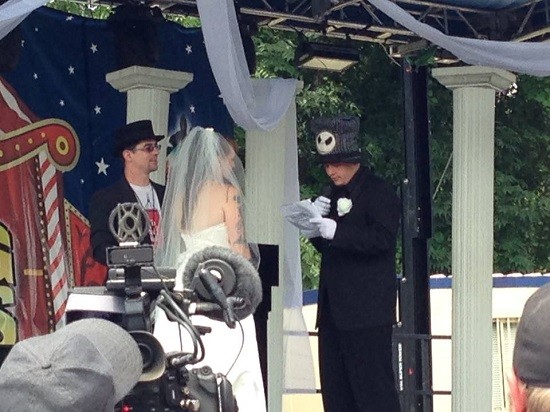 "Please, we ask you to hold your Faygo until the wedding begins," a woman with electric green braids instructs the crowd. Standing anxiously nearby is the groom, outfitted in a Jack Skellington top hat. His big day has arrived -- he is about to be wed to the love of his life, here at the Gathering of the Juggalos in Thornville, Ohio.

"I'm gonna try and fuck her in the butt tonight," he jokes.

As dedicated to their juggalo family as they are to one another, Tiffany and Dip Set, bride and groom, are here to tie the marriage noose at the Gathering's Carousel Stage. 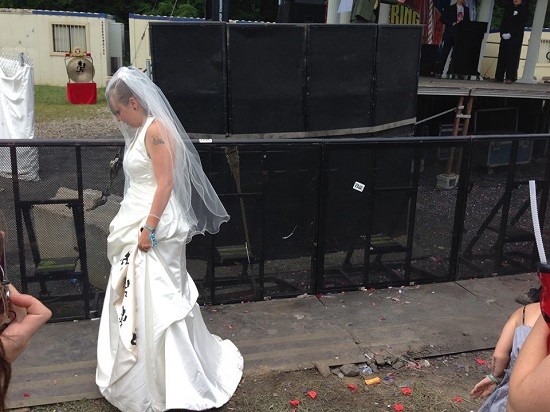 While a man with long hair plays a death metal version of "Here Comes The Bride" on electric guitar, audience members scream out the familial cry of "woop woop!" and bounce their heads in approval. The bride approaches the wedding in a golf cart before dismounting behind the crowd and making her way to the stage with a spirited little person following her as a flower girl. Juggalos swarm, brandishing smartphones and snapping pictures as other observers throw gummy candy. Jason Webber, head of Psychopathic Records' public relations, sports a tacky suit and passionately sings "She's Your Queen" (best-known from the film Coming to America) in falsetto.

"We are gathered here today to get fuckin' married," says the wedding's officiant. After a short speech that includes platinum lines like "swear to love her titties for all eternity" and "find someone willing to put up with how fucked up you are," the bespectacled emcee outlines the history of the couple: Tiffany and Dip Set have been together for two years now, having first met at a party after a Twiztid concert.

"If you want a lesson in being a man, look to this man," states the officiant. "He took in two kids that his dick did not create to become their father."

As the smell of trash, body odor and sunscreen waft through the air, the couple exchanges its vows. Hers are sincere and uttered with emotional pauses. His are crass and unrehearsed, yet simultaneously come off as charming, disgusting and refreshingly vulnerable.

"I promise I will always do what I have to in order to support us, even if I have to lose another finger," he states.

The groom continues: "I promise your neden [juggalo-speak for "vagina"] will be the only neden I ever taste." A female attendee with purple and blue hair -- herself presently eating a mixture of onions and beef slime -- looks on, chuckling.

The two juggalo lovebirds then repeat some touching lyrics from the song "Always" by Psychopathic Records rock band, Zug Izland.

The officiant then turns to Tiffany and Dip Set, encouraging them to make out. They oblige as juggalos spray the soft-drink Faygo everywhere in joyous celebration. The newlyweds then leave the stage, shaking a few hands as they climb into a golf cart covered in balloons. Together they putter away toward their Dark Carnival version of happily ever after. 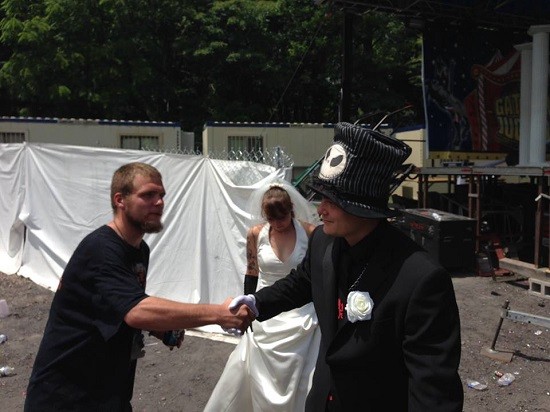 As they often do, the crowd erupts into a chant of "Fam-i-ly! Fam-i-ly!". But this time the refrain has dual meaning. Congratulations to the happy couple.

More coverage from the 2014 Gathering of the Juggalos:

We Talk to the Cops at Gathering of the Juggalos