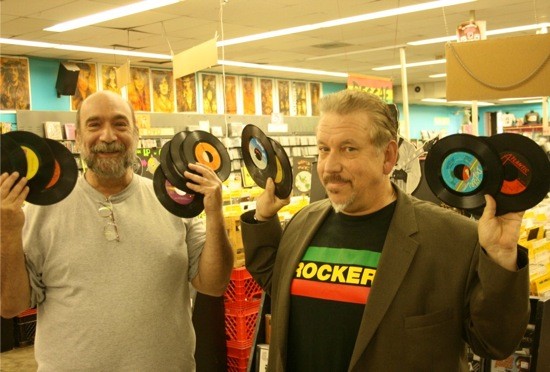 The co-owner of Vintage Vinyl was back in the nation's capital this week to receive a Champions of Change award from the White House. But if you think Lew Prince is flattered by the honor, think again. The real award, says Prince, will come once Congress raises the minimum wage.

"Look, the whole idea of this week's event was to generate publicity for raising the minimum wage," says Prince, who last November was one of a handful of business owners invited to meet personally with President Barack Obama and his cabinet to discuss raising the federal minimum wage to slightly over $10 per hour. "This was about getting those people back in town and keeping up the pressure."

While in D.C. on Tuesday, Prince was part of a panel of business leaders, academics and politicians sharing their views on C-SPAN on why companies need to pay entry-level workers higher wages.

Says Prince: "It's really about damn time. Even conservative Republicans are starting to endorse this because they're figuring out that a person working 40 hours a week can't live on $7.50."

The Obama administration wants to raise the federal minimum wage to $10.10. But to do so would need Congressional approval, which is far from guaranteed. As Prince argues, the pay increase just makes economic sense in that it would raise wages across the board. How? Because a fast-food manager making a dollar or two more per hour than her employees would also have to see her salary increase accordingly. And those making entry-level wages would be more likely to spend their money and increase the economy.

"The economics are stunning, and it's an easy thing for politicians to do," says Prince. "No taxes are raised. The only person whose ox is gored is a stockholder for a successful corporation."

Besides, says Prince, if his record store can afford to pay more than minimum wage, so too can major corporations. Vintage Vinyl starts new workers at $9 an hour, he says, and its full-time employees make much more than that. In addition, the company provides health insurance and paid vacations.

"And we're in an industry that is contracting financially," says Prince. "But here is the deal, when you pay people enough that they stick around, what you get is dedicated employees who are secure in their jobs and treat customers spectacularly. Of my twelve full-time guys, more than half have been here over twenty years. Everyone knows how to run everything here. It's a huge benefit of retaining workers."

Prince says that if Congress doesn't approve the minimum-wage hike, he and other employers with the group Business for a Fair Minimum Wage will attempt to get an initiative on the 2015 Missouri ballot that would raise the state's minimum wage to over $10. In 2006, Jobs with Justice and other wage reformers got the initiative on the ballot that pegged Missouri's minimum wage to the Consumer Price Index. That measure passed by a nearly three-to-one margin, and Prince is confident that a rise to $10.10 would also get voted in.

But about that White House award from Tuesday? Prince says he's yet to lay eyes on it.

"They are supposed to send me something, but frankly, I don't care," says Prince. "I'm 63 years old. That junk is all paper to me."