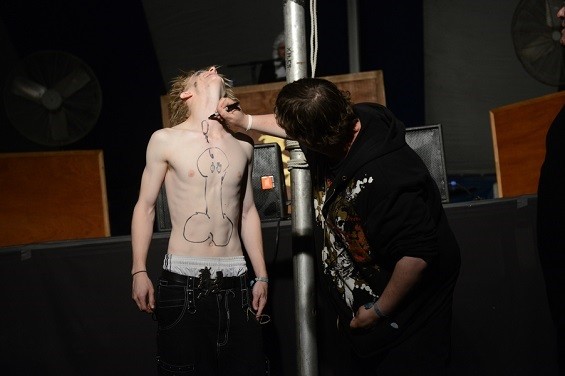 Those in the outside world tend to view the Gathering of the Juggalos as a lawless festival of debauchery, with apparently violent clowns -- "gang members," even, if you ask the U.S. government -- running rampant and chaos ruling the day.

In actuality, this notion is far from the truth. Juggalos in attendance not only consistently treat one another with respect, but they even have an institutionalized arbiter of disputes for when conflict does arise.

Have an issue with a fellow juggalo? Take them to Juggalo Night Court. 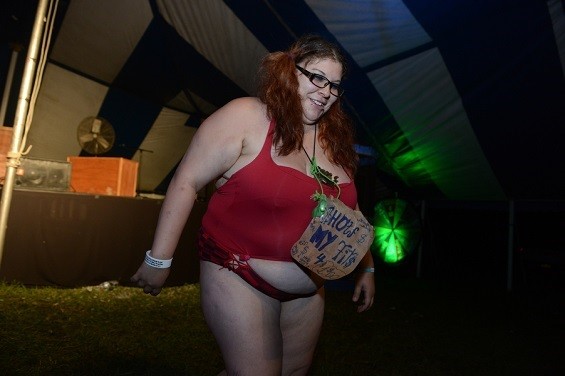 When we arrived at Juggalo Night Court on this evening, we learned that the previous case had just ended with a man known to the court as "Baby Dick" being submerged in a dunk tank, somehow ending up naked and then getting struck in the testicles with a softball. That last bit was not part of the court's officially mandated punishment, but instead a vigilante-style, bonus-round attack exacted by the case's plaintiff, a four-foot-eight-inch, twenty-year-old known to the court as "Fun Size." The crowd took umbrage with this unnecessary and unsanctioned assault, and charges were quickly brought against the young lady.

The case of Michael v. Fun Size deals with this matter. Michael eloquently explained to the jury, a.k.a. the entire crowd in attendance, why Fun Size's attack was unacceptable, and why it is important to uphold the rule of law. In response, the jury began chanting "SHOW YOUR TITS! SHOW YOUR TITS!" in unison.

Fun Size did as the court requested, and challenged Michael to do the same, scoffing that he would be unable due to his gender. Michael then removed his shirt for the court, inciting applause. One particularly eagle-eyed member of the jury declared that Fun Size "had bigger tits," which met with the approval of all in attendance.

Despite this compelling evidence, Fun Size was found guilty, owing to the fact that the jury had actually been material witnesses to the crime. In defiance, she double-flipped the bird as the bailiff led her to the Wheel of Bone, which would determine her sentence. 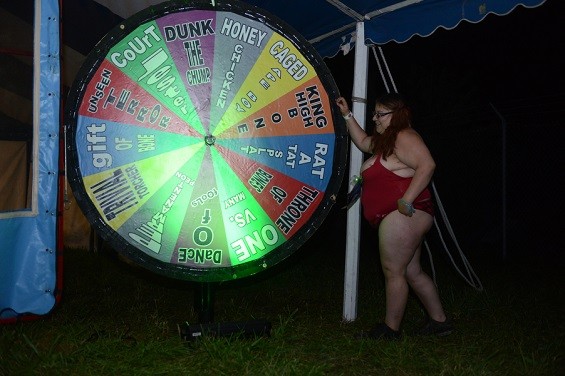 Sentence: One vs. Many Fun Size was given a helmet with a face mask as the Honorable Judge High Bone declared Juggalo Night Court to be "the only place where beating a woman is acceptable." Michael and two volunteers were given helmets as well, and all three were then handed American Gladiator-style pugil sticks -- the punishment was to be a three-on-one battle lasting one full minute. 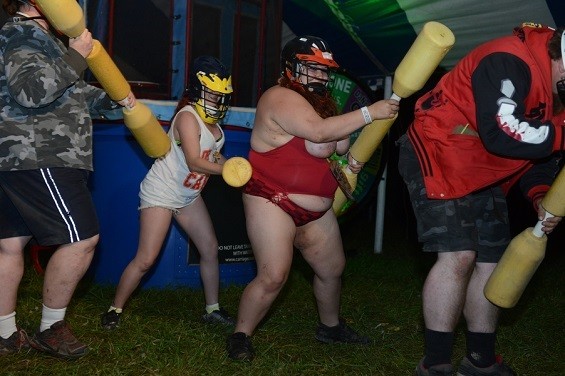 And then they seized upon her. Fun Size battled with the might of a great warrior, undaunted, even when her boobs were thrown clear from her shirt mid-battle, causing Judge High Bone to remark, "They hit her so hard her titties popped out!" Fun Size powered through and took aim at her lone female opponent, knocking the young woman's helmet clean off in a frenzied attack.

When the minute was up, all involved returned to their seats in the audience. "I think my finger is broken," the unnamed female volunteer remarked to her friends. "For real."

Continue to the next page for the second case of the night.

The case of Devon v. Sam was less clean-cut, and saw a fair amount of debate and discussion from both sides. Sam took Devon to task for his possession of a camping chair, which he had been bringing to all events at the Seminar Tent (home of Juggalo Night Court as well as the many talks delivered by Psychopathic Records artists). Devon would arrive early and place his chair front and center, allowing himself an up-close view of the proceedings. Sam argued that Devon should be in the thick of things, seated on a hay bale "with the rest of the juggalo family."

Judge High Bone questioned Devon as to whether he had any special needs that would require the use of a chair. Devon indicated that he did not, and then even offered to give Sam his seat. As the two discussed the virtues of the varying seating arrangements at the venue, one member of the jury helpfully suggested that Sam "sit on his fucking lap" as several others became dissatisfied and began demanding a "double spin" on the Wheel of Bone, meaning that both the defendant and the plaintiff would receive punishment, "for wasting everyone's fucking time with this shit."

"If it happens to land on the dunk tank he's gotta sit on his lap," were Judge High Bone's remarks.

Sentence: Dance of Fools In the official Juggalo Lawbooks, the Dance of Fools is defined as follows: The loser is to stand in front of the Wall of Punishment as a dozen eggs and two Super Soakers -- possibly filled with urine, according to the judge -- are handed out to volunteers from the audience. A "silly song" would then be played, and the loser is to dance for its duration while the volunteer executioners unload their arsenal.

When the court asked for volunteers, 30 to 40 eager juggalos immediately sprung to their feet.

A problem with this sentence presented itself immediately when Judge High Bone informed the crowd that production had, sadly, run out of eggs. The incensed audience cried out for justice, their discontent turning immediately to sadistic joy when the judge added, "but the paintball guns are here." The desire within the audience members to be chosen for the task reached a fevered pitch at this point, with one seated juggalo enthusiastically offering, "I'll suck my own dick!" as an incentive for inclusion. 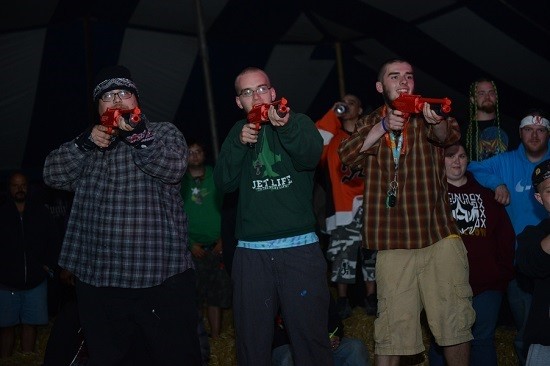 In the end, a paintball team from Wisconsin was picked for the job. The group stood three rows of hay bales back and fired a total of nine shots from three guns at each of the accused. Devon walked away unscathed, prompting unhappiness from the bloodthirsty crowd, but Sam was not so lucky and suffered direct blows from five of the shots. Both the musical and dancing elements of the Dance of Fools punishment were apparently forgotten.

Continue to the next page for the third case of the night.

There was a lull in the night's proceedings at this point, with no further cases on the docket. "How about we just start boning people?" was one audience member's suggestion, meaning the court would start forcing attendees to spin the Wheel of Bone despite no crime having been committed. The judge replied, "What, are you horny?" and then balked at the tyranny of this police-state idea, reminding all that Juggalo Night Court adheres to the laws of the land. When a skinny young juggalo stood up and volunteered, the audience let loose with an unprecedented "LET HIM SPIN!" chant. The court saw fit to oblige.

The Wheel landed on a sentence called "Permanent Peon," for which audience members are handed markers and given one minute to draw on the body of the accused. "I'll suck my own dick" guy from earlier again offered his intriguing incentive, and was chosen for the task. As the lack of proper writing implements became apparent, he reached into his pocket.

"I have a Sharpie that I stole from the Autograph Tent," he announced. As the jury reeled from this explosive and unexpected courtroom confession, "I'll suck my own dick" guy, a.k.a. Andrew, was brought up on charges of theft.

Audience member Ninja Lotus stepped up to argue the case for the prosecution. His case was simple, but convincing: "He just admitted it in front of everybody."

Andrew took to his own defense: "I was going to return it," he claimed. He then appealed to the jury's artistic sensibilities, pointing to the giant penis now drawn on the previous Wheel-spinner's chest and remarking, "That's an amazing dick, and without this pen that I borrowed, it wouldn't have happened."

Judge High Bone commented on the case, asking Andrew, "How do you know it's an amazing dick? How many dicks have you seen?"

"I just know it looks way better than my dick," was Andrew's retort. "My dick is horrible. My dick looks like a vagina." These arguments met with the approval of the jury, who immediately launched into a "MUTILATED DICKS! MUTILATED DICKS!" chant.

Despite their appreciation of Andrew's vagina-dick, the jury did not buy Andrew's claim that he intended to return the marker, loudly chanting "BULLSHIT!" Andrew was found guilty. As he spun the Wheel of Bone, the defeated man exclaimed in defeat: "Fuck my life!"

Sentence: Trivial Torture Judge High Bone let out an audible yelp of glee when the Wheel landed on this sentence. "I never get to torture anyone!" he said. "That ends tonight." High Bone then stepped off of the bench and down to the electric chair in which Andrew was being strapped.

Andrew was then asked five trivia questions. For each question that he answered incorrectly, he experienced a shock from electrodes operated by the Honorable Judge. He answered all five incorrectly.

As we stood up to leave, Judge High Bone announced again that there were no further cases on the night's docket. The dearth of incidents in need of official arbitration speaks to the Gathering's overall lack of conflict -- far from the violent image they project, the majority of juggalos are a peaceful bunch, self-policing and quick to bury the hatchet, if you can pardon the pun.

But don't mistake that pacifism for weakness. Those in violation of the law of the land have Juggalo Night Court to answer to for their crimes.

"Two more? What the fuck?!" shouted Andrew, in pain following his third shock of the night. Clutching the chair's controls, Judge High Bone grinned ear to ear. Juggalo justice had been served.

See also: Wild Scenes at the Gathering of the Juggalos 2014