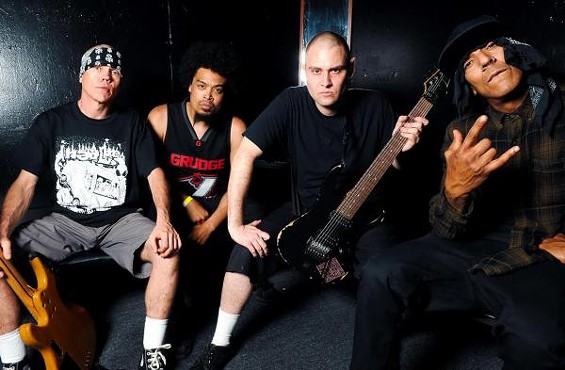 While the Gathering of the Juggalos is generally known as a peaceful event filled with unity and togetherness, there are still occasional scuffles. One such incident took the form of a melee early Thursday morning when Hed PE rapper/singer Jared Gomes launched himself into the crowd to confront a rambunctious heckler.

According to an eyewitness account, the Southern California nu-metal act's 3:30 a.m. set on the Carousel stage was detoured after a member of the crowd kept yelling at the band to play songs by the Clue -- Gomes' highly memorable new-wave band from the '80s. As you can observe in the video below, the Clue's style is fairly distant from the jump-up-and-down rap/rock hybrid approach his current band is better known for, performing with acts such as Korn and System of a Down.

"I don't know exactly what [the heckler] was saying, but all of a sudden [Gomes] just stops and goes, 'Fuck you faggot; that was the '80s. I'm done with that. What the fuck ever; that's how we did shit back in the day. That ain't me anymore. Fuck you, faggot! Fuck this," recalls show attendee Robert Burke. At that point, Gomes reportedly jumped off of the stage and began punching the offending juggalo. Moments later, the singer appeared back onstage, boastfully claiming to only have been punched once during the scrap before resuming the band's set.

Hed pe on. Recovering from the singer launching at a fan and a massive brawl breaking out. He had it coming. #GOTJ #gotj2014

See also: Juggalos, a Cop's Perspective However, the assaulted audience member was only emboldened by the incident to take his harassment to the next level, making his way through the crowd brandishing a large cardboard sign that again insisted the band "PLAY THE CLUE." Gomes again responded angrily, ordering the sign to be destroyed by two compliant audience members.

"Two guys walk up and just break the sign, right then and there," Burke explains. "That was it. After that, someone came up with a six-foot bong and gave [Gomes] a big-ass bong rip, right onstage."

"He was still a little pissed off, but then he pulled out a joint and started playing Bob Marley's 'No Woman, No Cry,'" Burke continued.

When asked what he thought of the band's set, Burke smiled.