After a seven-year stint at Cave-In-Rock, Illinois, the Gathering of the Juggalos moves this year to Legend Valley Campground in Thornville, Ohio.

Will its new home prove as accommodating as its last? Or will the residents of Thornville freak the hell out -- like the citizens of Kaiser, Missouri, did when they learned last year that the Gathering was flirting with a move to their town?

After Day One of the Gathering in Thornville, it's probably a bit premature to answer either of those questions. But there are plenty of differences between this year's Gathering and last year's festival. Below are ten initial observations we had as to how the move to Ohio may be better -- or worse.

1. Cell Phone Reception/Wi-Fi Last year's Gathering was located so far off of the grid it might as well have been in Kazakhstan. Cell phone reception was completely nonexistent, meaning not only no calls, but no walking around with the Internet in your pocket, either. Your Facebook, Twitter, Instagram, Tindr and Grindr accounts were inaccessible. Your hand-held personal supercomputer was as useless as that Commodore 64 gathering dust in your parents' basement.

It made for a surreal landscape. When was the last time you were in a group of thousands of people and no one was on their phone? Everyone was heads-up, talking and looking at one another, engaged in the activities in front of them. It was refreshing, really.

This year we are back on Earth again, with technology and all of the screen-obsessed narcissism that comes with it. Neat.

2. The Porta-Potties Are Somehow More Disgusting The outdoor latrines aren't covered in graffiti with sayings such as "I KILL HOOKERS" like last year, but their more sanitary looks are certainly deceiving. We entered a Porta-Potty toward the main entrance, using our cell phone as a flashlight to make sure we didn't slip on a turd. We needn't have bothered. Somehow the juggalos crowd had found a way to clog a portable toilet. We wouldn't be surprised if someone just fell in the bottom of it and got covered in solid waste until it was almost overflowing over the seat.

Daunted, we just pissed in the gallon of orange liquid (Faygo?) that was floating atop the "urinal" of the unit. Oof.

3. There's a Police Presence in Ohio It's true: Cops have infiltrated the campgrounds and -- not surprisingly -- are getting plenty of suspicious glances from the juggalos in attendance. Oddly, though, the cops don't seem to be messing with anyone. So far they're just puttering around in golf carts and doing what cops do best: drinking coffee. Last year's security force gave one the impression that the Gathering's organizers simply rounded up the tallest juggalos they could find and gave them orange shirts. A pretty drastic change, indeed.

4. Startling Lack of Cardboard Signs Where's the guy with the "Breakfast Cocaine" sign? Where's the kid with the sign offering to let people kick him in the jewels for $10? Where's the existentialist with the sign that just says, "CARDBOARD SIGN"? We don't know, but we're confused as hell and a little wistful when we think of the endless stream of Sharpie entertainment from last year that is now missing.

In any case, last year's campgrounds were downright suburban by comparison. 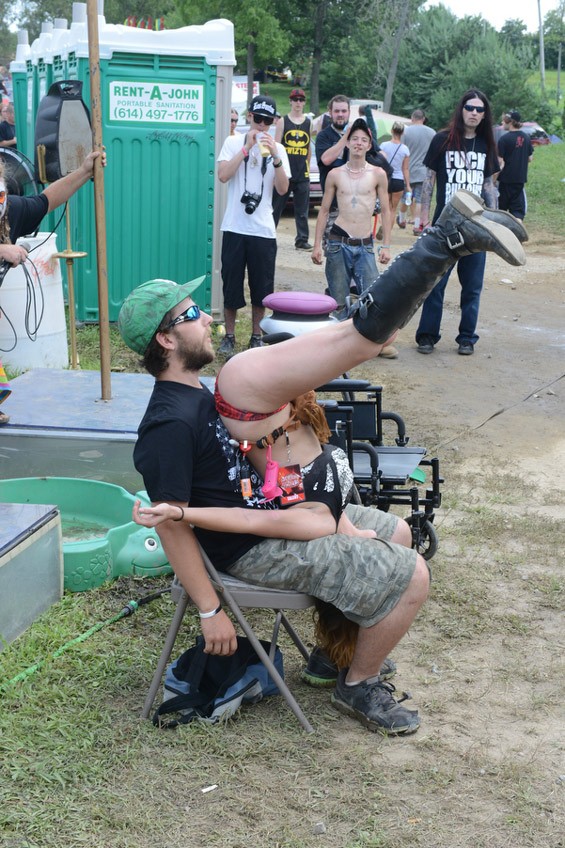 6. Outdoor Strip Club Operated by Gary Busey's Nephew Yep. This is a thing. We heard the city "Orlando" mentioned by the emcee, so you can probably piece together the rest. And before you ask, of course there are commemorative T-shirts to support whatever the fuck this is actually for. Why wouldn't there be? Now, check out this mugshot of Mike Busey, arrested in 2012 by Osceola County police for selling alcohol without a liquor license while wearing a Santa Claus outfit.

7. More Press With the notable exception of some very outlandish and confused looking Germans fumbling around with a large camera, we didn't see a lot of press last year. That isn't to say they weren't there, but they certainly weren't noticeable. This year members of the media can be seen fiddling with the collars on their button-up shirts, nervously pawing their "PRESS" laminates and sticking close to their similarly narc-looking companions. They tiptoe through the festival ground like it's a minefield. Which isn't too unreasonable, actually, because parts of the ground are covered with passed out juggalos. You do not want to step on those.

8. More Hipsters See the description of the press people. Only the latter have the sense to openly take some drugs.

9. Fewer Motorized Vehicles Last year the Gathering could feel a bit like an LA freeway during rush hour, what with all reckless driving and gridlock from juggalos on their ATVs and other motorized vehicles. So far, from what we've seen this year, there's just a limited assortment of golf carts, scooters, bicycles and two dudes on unicycles who are also juggling bowling pins. Baller status: engaged.

10. Burrito Guy Is Easier to Find We found the campground's finest vendor within two hours of getting here. And you know what? We're still sold on the idea that putting slices of American cheese on a burrito is a culinary concept so stupid and tasty that it's a goddamned miracle. Some things never change, right?