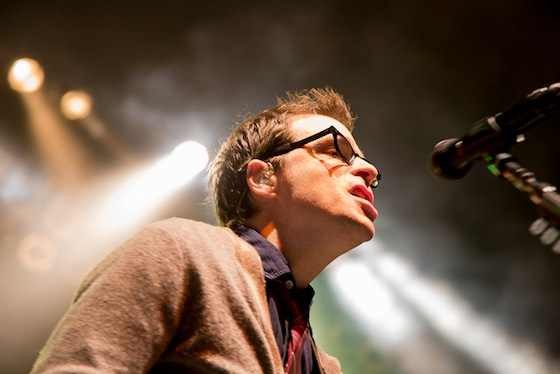 Weezer is the official band of AOL Instant Messenger. The years between 1996 and 2001, in which the group went from well-reviewed one-hit-wonder to (briefly) unimpeachable generational touchstone, were peak-Buddy-List; in 2002 the band demoed a song called "Private Message," which is exactly what it sounds like. At some point every word in the Blue Album and Pinkerton liner notes was used in an angst-ridden away message.

Even Rivers Cuomo spent an inordinate amount of time chatting with people on AIM -- which is exactly how a long-lost Weezer song fans have been waiting for for fourteen years leaked a little more than a week ago.

The idea of Cuomo direct-connecting a random fan an unreleased song in 2002 certainly isn't surprising. Between the Green Album and Maladroit he was at his most cartoonishly antagonistic, telling fans on a forum called the "Rivers Correspondence Board" that the very worst, most robotic tracks on those two albums were better than anything he'd written in 1994. ("Only in Dreams" was "gay gay disneygay.") Maladroit even sounds antagonistic.

But he was also surprisingly reachable, in a distinctly 2002 way. The Maladroit demos were posted as naked MP3 files on their official website while the album was being made; the members of the RCB got him to scrawl the words "slim pensi lolz" on his guitar.

And if you caught him on AIM you could ask him why all the solos on the Green Album were the same, or what a demo listed on the massive Catalog of Riffs sounded like. You might even get him to send you a song nobody else had ever heard before. ("Blast Off", the centerpiece of their aborted rock opera, is supposed to have leaked when a fan tricked Cuomo into sending it over AIM.)

"Burning Sun," according to the 4chan user who leaked it, got out that way. Until last Friday fans had less than a minute of the track, which had been spliced with another track before being released and had, according to some reasonable-sounding rumors, been erased or corrupted since.

So we listened to it, and debated its place on the list of Weezer Holy Grails right up until this happened:

And that's all it took. One afternoon a song we'd been waiting for since we were kids was on the Internet -- and as we all expected, it sounded basically like every other Green Album song, with a guitar solo indistinguishable from the verse melody and lyrics he'd bought somewhere by the yard. As a member of the last Weezer forum standing, I can say that most of us seem happy about it anyway. If nothing else, we just like having things to talk about -- and things that remind us of the decentralized Internet we grew up in.

Immediately after Maladroit, Weezer began to release demos for its next album that had the same loose, autopiloted feel. But the hyper-confidence that had created songs like "Space Rock" and "American Gigolo" (about how annoying fans on message boards are, if they're about anything) and let him opine about "Crab" and "Death & Destruction" outshining "Only in Dreams" deserted Cuomo when the album slid down the charts on release, and the demos dried up, and before the band vanished for three years -- as a last-ditch effort to resurrect the album -- a clean-shaven Cuomo had danced with the Muppets on a polished, re-recorded version of "Keep Fishin'."

He did not look much like the would-be tycoon who'd made dirty jokes with his fans and announced his intention to conquer in the name of Weezer, and the songs he had written for their follow-up were all scrapped. He left the message boards (but not before releasing an apologetic, open-hearted demo called "Hold Me"), started meditating and eventually came back with Make Believe, which is probably the best-selling rock album ever made about being very sorry all the time.

The message boards were still there, but the little islands of pseudonymous super-fandom that marked that version of the internet had all peaked. By the time Weezer merged with the mainstream in 2005 we'd all moved to MySpace, and traded away messages that went "The world has turned / and left me here" to status updates with the verbose, screamy emo rants of the bands Weezer somehow influenced.

Like a lot of us, Weezer is now a little worse for the wear and cognizant of it -- the members are making a valiant effort to adapt, having spent the last few months teasing their (kind of exciting) new album on Tumblr and YouTube with a cover they dug up on Reddit, but all the actual teens and twenty-somethings of 2014 can tell from the hand-lettered Where the Wild Things Are script that they're still kind of tethered to the "Pork and Beans" internet of 2008.

The old internet is gone, and most of the people who waited on secret message boards for the rest of "Burning Sun" are busy posting photos of their kids on Facebook. They probably don't remember the boys and girls who inspired them to quote "The World Has Turned and Left Me Here" in their AOL Profile, and they definitely don't use 4chan (or god help them if they do.)

But it all seemed really important at the time. And if they ever stumble upon the second verse of "Burning Sun," now that it's out there, I think they'll be happy with what they hear.