Yeehaw! Missouri Ranks As No. 3 State Where Life Is Like a Country Song 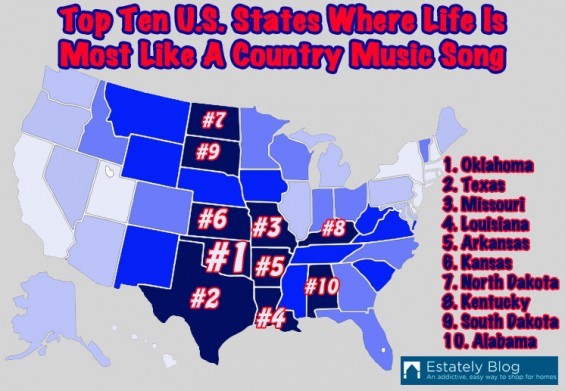 Are we really living out country songs here in Missouri? Hound dogs, pickup trucks, moonshine and the works, to the extent of being the third-most country-fried state in the nation? Armed with tons of data, national real estate site Estately challenges that it's possible. Oh, joy.

We've been burned in the past with weird data factories claiming to have the pulse of the country. Anyone remember when the Echo Nest swore that the most popular band in Missouri was the Shins? Yeah, that was kind of crazy. (We think our very scientific discovery about the least popular bands in the states was way better.)

But Estately really dove into the research, using its mysterious real estate connections to figure out which states' residents are most likely to have lifestyles resembling popular themes in country music. "To do this, we researched where people are most likely to drive pickups down dirt roads, have their heart broken by a cowboy or cowgirl, or sip cold beers or whiskey by the river after a long day of work," Estately says.

Estately used nine criteria to guide its research through various databases (These are Estately's categories, not ours, we swear):

Estately has a chart with how each state fared in each of the nine categories above. While Missouri was pretty average, all told, we ranked in the top ten in three of the nine categories, which was enough to land us the third-highest spot in the country-livin' poll after Oklahoma and Texas.

On page two, see a pretty chart showing which aspects of country-song life Missouri is exceptionally good at.

The state that's most like a country song, Oklahoma, scored highest in divorces, cowfolks, pickup trucks and hall of famers, for an average rank of 11.00. Runner-up Texas skated by with its second-place finishes in both hall of fame musicians and miles of dirt roads; the state's other country-living numbers were pretty unimpressive.

We poked around and noticed some other interesting stuff. While we thought Missouri's drinking score would be higher than 22nd, we were surprised to learn that New Hampshire led the nation, followed by North Dakota and Delaware. And when it came to cruising around those endless miles of dirt roads in a pickup, North Dakota again came out on top, with Wyoming and Montana (a.k.a., the dusty, boring states) tailgating.

Check out the full results of Estately's research below.