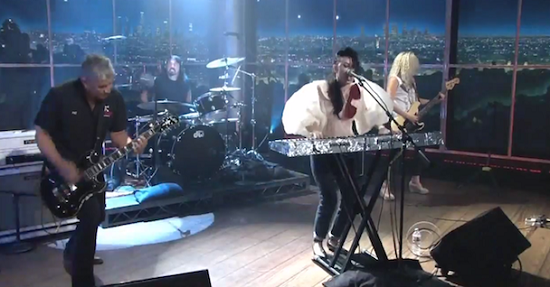 Native St. Louisan Kristeen Young, well-known for recently giving Morrissey a simply dreadful case of the common cold which caused Moz to cancel his entire tour (still an unbelievably flimsy excuse, brah), made her television debut this week -- and boy, was it a doozy.

Young performed on the Late Late Show with Craig Ferguson, backed by no less than Dave Grohl and Pat Smear, of Foo Fighters fame.

See also: Morrissey Gets the Sniffles From STL Ex-Pat, Cancels Entire Tour Over It

The song is called "Pearl of a Girl," a single off her latest, The Knife Shift, for which Grohl lent his talents to a variety of instruments. Grohl is also listed as a producer.

At press time we have heard no word of debilitating, performance-stopping sniffles out of Grohl or Smear, so it is probably safe to say at this point that Young is no longer a carrier. (Somebody go tell Morrissey it is safe to leave his hyperbaric chamber now. The danger has passed.)

Watch the entire energetic performance below: