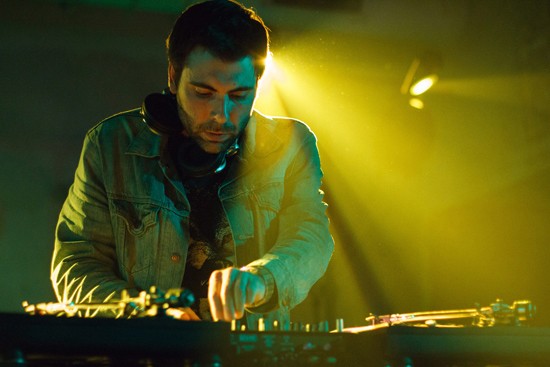 When asked about the origin of his music moniker, performer Rory Flynn, a.k.a. DJ MAKossa, explains that makossa is a style of urban music made popular in Cameroon. In its native language, it simply translates to "dance."

"I found it to be a good name because it really has fused with a lot of different styles of music outside of Africa, such as reggae and funk," says Flynn. "To me, it kind of represents a diverse style of Afrocentrism."

Flynn got his start playing records at the University of Kansas' radio station, KJHK. He moved to the West Coast shortly thereafter, where he refined his record-spinning identity working with artists such as DJ Centipede, a.k.a. Mophono. Since moving back to his hometown of St. Louis, he's been a nonstop mover and shaker, setting up regular events including Blank Space's popular monthly Bump & Hustle. The next event this Saturday features Mophono as the special two-year anniversary guest.

DJ MAKossa spins primarily vinyl, hinging on funk's influence across a variety of genres including soul, reggae, hip-hop, Latin, psychedelic and Afrobeat. You can find him at Blank Space during the Bump & Hustle on the third Saturday of each month. He also DJs every Thursday night at Atomic Cowboy and every Saturday night at Boogaloo (except for B&H weekends).

The album that best represents me is... Tough question, but I think DJ Shadow's Entroducing would be a good example. I really love how he sampled such a wide variety of records to make the album. I try to play as diverse a selection of records as possible, and never allow people to predict the records or the style I am going to play.

I got into DJing because... it gave me a much-needed creative outlet and allowed me to connect with people through similar musical interests.

The thing I like most about St. Louis is... the support I feel from the people who continue to come out to events that I promote and perform at. I'd particularly like to thank Blank Space and the Cherokee Street community.

The first vinyl record I ever bought was... DJ Shadow, Endtroducing.

The most prized item in my music collection is... I have quite a few records that I would never sell, but the first thing that popped into my head was my 7-inch of Ron Wray Light Show's Speed. It truly is a face-melting, psychedelic, fuzz bomb -- one of the rawest things I've ever heard.

A record never allowed on my turntable is... any music that represents the exploitation of real hip-hop culture by corporate America (or the equivalent soul-sucking, global conglomerate).

The song that gets the best reaction when I'm performing is... Oliver $, Doin' Ya Thang. This one always gets a fun reaction. Oliver $ cuts up some vocals of Detroit house legend Moodyman performing. It really captures Moodyman's vibe and shows that he is one of the coolest dudes ever.

The strangest request I've ever gotten while DJing is... a request for "some hip-hop" while I was playing RUN-DMC. I was completely baffled by the ignorance of what real hip-hop is.

The vibe during my sets is usually... funky, fuzzy, psychedelic, drum heavy.

My most memorable gig was... Last May I was invited to play at the legendary Soul Summit monthly party in Chicago. I was incredibly honored as the event hosts the best funk and soul DJs from around the world. I got to perform in front of 1,200-plus people at the Double Door in Chicago. The venue and the host DJs were great. Shout out to Dave Mata, Sloppy White and Duke Grip for having me.

One person to watch in the St. Louis music scene right now is... Black James, who really puts on an amazing performance. Her style is totally unique and original. I could see her performing at some large festivals and really blowing people's minds.