Beck Performs In St. Louis For the First Time In Fourteen Years: Review and Photos 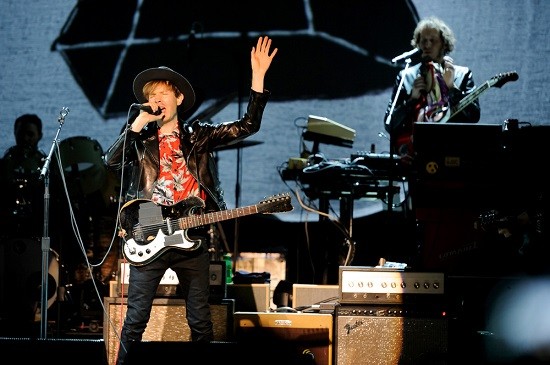 As Beck stepped on stage in front of a capacity crowd at the Pageant last night, he looked younger than he should. His hair was cropped short, a leather jacket stylishly complimenting his black jeans and Hawaiian-ish button-up. Here he was, his first show in St. Louis in fourteen years, and alongside him were guitarist Smokey Hormel and bassist Justin Meldal-Johnsen -- two musicians that have been with Beck during his best moments but who have been absent for most of the last decade. As the three ripped into opener "Devil's Haircut," it felt like the band was back together. The evening proved to be a career-spanning whirlwind with no shortage of nostalgic hits.

It was interesting to see Beck pull from his old catalog as a means to reclaim the days when he was America's favorite sandwich bread. The show had many moments that felt like you were in bed with an old lover who was fumbling under the sheets, trying to remember what it was that really got you going. When things hit right it was indeed orgasmic, but the few lulls of the evening left me making a face as if I were trying to remember how to do long division while not crushing an egg held between my buttocks.

This trip back to the good ol' days worked well, truth be told. Having Odelay bangers like "Novocain" and "Minus" in the setlist would have been enough for most fans, but perhaps the most exciting moment came during a guitar change when Beck started making references to things like attache cases and "808 buttons", implying that we were about to get Midnight Vultures' "Hollywood Freaks" or "Arabian Nights", a rarity from the same era. Now, that would've been a huge coup for Becks' first show in St. Louis since the end of Friends, but we instead got tour staple "Get Real Paid," a Black Nasty-meets-Kraftwerk jam that almost epitomizes Beck's lyrical prowess. This is a man who can combine bohemian thought with seemingly random bits of slang and just a dash of Hugo Ball's sound poetry to create a whole new ethereal plane of weirdness.

It's awkward -- but my duty to acknowledge -- that the album that Mr. Hansen is touring behind didn't really fit with the rest of the performance. Sure, "Blue Moon" and "Blackbird Chain" are great songs and have the musical hooks akin to Beck's work on Sea Change, but other cuts from Morning View all but killed the vibe. It's a shame because the album is great, but they were hard to sit through knowing the extent of Beck's work. Plus all of those long, sustained vowels at pitch makes one on edge with the thought that things are about to slowly transition into "Goodbye Horses."

Before the encore, Beck cordoned off the front of the stage with a line of police tape. It was the sort of gesture that may have made a headline ten years ago, but in a world with viral marketing and social media it created more questions and skepticism than anything else. The world, in some ways, has moved past Beck and his melting pot approach to music and performance. However, last night at the Pageant he proved his greatness and originality. And I like to think that maybe, in some small way, it was an apology for working with Danger Mouse.

Sean Lennon? Sean Lennon was there with the Ghost of a Saber Tooth Tiger to provide the evening's middle-of-the-road entertainment. Near the end of the set I thought to myself, "A fair and loving god would not subject so many innocent folks to this much Sean Lennon," and a few moments later his pedal board lost power, cutting off his guitar. I'll be at church this Sunday.