Alynda Lee Segarra of Hurray for the Riff Raff on the Road, New Orleans and Eminems With Guitars 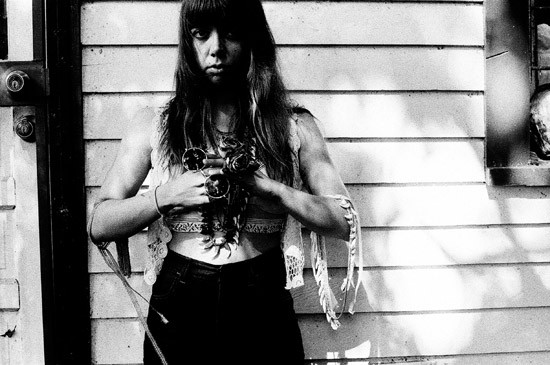 When I reach Alynda Lee Segarra, she's just gone through airport security in Chicago, headed to the Winnipeg Folk Festival, where she and her band, Hurray for the Riff Raff, will perform and take part in a workshop on "riffing." It's a rather charming (and literal) statement on behalf of the event, though Segarra's music is far more intentional and intimately driven than the act of jamming or improvising, though give her and her long-time musical partner Yosi Perlstein a fiddle and some sticks and they can riff all night.

This year Segarra turned 27 and released Small Town Heroes (her fifth record and first for the ATO label), a blues and folk and swinging old-time homage to the riff raff she has known and that, despite all her recent notoriety, still is. Born and raised in the Bronx, Segarra took a cue from the Beats and Woody Guthrie and hit the road as a teenager, hopping trains and falling in with drifters and outsiders, learning to make music on the fringes of American life and on the road, and eventually settling in New Orleans a year before Hurricane Katrina hit, a city that she still calls home, and whose spirit -- its beauty, tragedy and music -- infuses the heroism of the record's title with life-affirming meaning.

This week, Hurray for the Riff Raff begins a tour with one of Segarra's earliest heroes, Old Crow Medicine Show. ("I used to dream about seeing one of those shows they did with Gillian Welch," she confides.) In advance of her opening slot for OCMS at Peabody Opera House on Friday, July 18, Segarra chatted with RFT Music about her road to New Orleans and the folk politics that drive Small Town Heroes.

Roy Kasten: Tell me about your strongest musical memory of New York in the '90s.

Alynda Lee Segarra: I grew up listening to a lot of Motown and doowop, the music my parents listened to. 1950s musicals. That's what I was obsessed with as a kid. Then I started going to punk shows in the 2000s. I just related more to music from the '50s than the pop music of the day, Britney Spears and stuff like that. It just spoke to me more as a kid, and somehow I always felt I should have been born in the '50s.

A lot of teens fantasize about leaving home and hitchhiking or freight-hopping. But what compelled you to actually go and do it?

At the time I had a lot of friends who were already doing it, so it was a slow buildup. I wasn't in school anymore, and things were going kind of bad. I felt like it was my only option at the time. I thought, if I was going to be a bum, I might as well have a romantic time doing it. I was inspired by Woody Guthrie, and I was reading a lot of Beat poetry. I just couldn't say no to it, even though I was scared.

Maybe it's a rite of passage to dream of doing that or doing it in small ways as a teenager, but the percentage of kids who actually leave home and cross the county on their own is, I don't know, .001 percent. So what put you in that .001 percent?

I happened to be around that percentage. I was too afraid to do something like that on my own, but in the punk scene there just so happened to be a lot of kids around me who were either runaways or kids in their early twenties who were doing it. I was in this family of people who were doing it. I felt like I could get the courage and do it as safely as possible. It has more to do with having the luck to be in a subculture that was doing that already.

When you say things were going bad at the time, what do you mean?

It was just me getting to an age and wondering: "Is this it? Finish school, go to college and get a job? Struggle to survive in New York City, which has become one of the most expensive cities in the world?" I just felt I couldn't live in that kind of competitive environment. The New York that my family grew up in is gone. The time they grew up in New York, it was affordable, and artists could make a life for themselves there. I felt like I could never do that. All those pressures were building up, and I didn't want to be a failure. I figured that opting out was better than being a failure. [Laughs] I felt there was something out there for me.

What was the most important lesson you learned when you were on the road?

It was just meeting a lot of the people that were on the road who weren't doing it as a choice. They were old veterans or people who had fallen on hard times. They didn't have a choice about going home. That was a wake-up call for me, being around people like that, just seeing all these different sides of humanity, these people who are living on the outskirts of society. It got me in touch with this other side of what America is. It includes the homeless. That changed the way I see the world and look at people.

Do you feel like when you're touring now, that you still get a little bit of that perspective?

I love the way we travel now. I still meet a lot of amazing people. You meet people in a different way. I love traveling with a purpose, with something to give to people. It's more focused on getting close to my band and the team that works with us. Traveling was always about traveling with a family. I always had my crew that I went around with, so now it's still like that. But now we go all over the world, and get paid for it. That's like a dream.

Was there a moment, a break if you will, when you made a transition from playing for friends or busking, and becoming a professional artist?

Teaming up with Yosi Perlstein changed a lot for me. When we teamed up I felt like I had a partner in crime. We shared a similar vision of what we wanted the band to become, what we wanted the music to do. And working with our long-time manager Andrew Bizer gave me the perspective that it was even an option to do what we do today.

I made my first trip to New Orleans back in May. It took me fifteen minutes to fall in love with the city and never want to leave. How long did it take you?

About the same. I was in a van with a bunch of people, and I got out on Decatur, and I thought, "Wow, this is it. I could do this." All that dreaming about going back in time when I was little came true in New Orleans.

Many of the songs on the new album are love letters to New Orleans, but there are also confessions, warnings, like "St. Roch Blues." Did the songs come together at once or over a long period of time?

Those songs have been in my head for a couple of years. I gathered them after living in New Orleans for many years, and then going out on the road a lot. Being away from New Orleans made me start writing those songs and reflecting on my time there, the many different dynamics I've seen as an outsider living there.

Now I don't feel like I'm an outsider, but it's a different life that I lead from the average New Orleans resident. No matter what, I'm never going to be someone who is from New Orleans. That's a different relationship they have with the city. I like to say that I'm based out of there. The city has given me so much support. I try to rep it everywhere I go. If it weren't For New Orleans I wouldn't be playing music today.

Can you tell me the story behind "End of the Line"?

I wrote that one about a house I was living in in the Lower Ninth Ward, a great house by the river. We had a great big back yard, and it was connected to a house next door, and a lot of songwriters were filtering in and out. These guys from a band called the Deslondes were there writing songs. It was an inspirational spot. I wrote a lot of songs there. I wanted to capture the feeling of living there. It's sort of my version of Neil Young's "Long May You Run."

Do you remember when you wrote "The Body Electric"? Did a specific song set it off, or was it an idea you had to write a feminist answer song to the murder ballad tradition?

That's how it originated. I was at a bar listening to someone play a murder-ballad-style song they had written. That particular night it made me really angry. I was watching this person, and they were using that form, and they didn't truly understand what they were saying. I'm a news junkie, and I'd read a lot of stories in the news; I was feeling that the state of women globally, that we're at a breaking point. We're starting to reach this new consciousness about what it means to be free and safe in the world, and how do we want to be treated, whether it's culturally or in our personal relationships. Songs have so much power. If we change the way we sing about women it will change the way we treat women. It comes from believing in the power of song. I believe in Woody Guthrie and the songs that John Lennon wrote. They changed the way I think about the world. I think it's time that we take this tradition and put it to rest, and start reexamining the way we sing and write about women.

In that tradition, a lot of those songs started out as news reports. The singer was telling the story of something in recent memory. They weren't glorifying it or doing it for some gothic, hipster appeal.

Those songs were so beautiful. When people take that form just to be edgy, it gets me. What inspired that song is that someone had written something in that style but it wasn't saying anything but that they had killed their girlfriend because they were mad. Man, you're just like Eminem, except you're playing a guitar.