Who Will "Have the Balls" to Host The Air Guitar Competition in St. Louis Next Year? 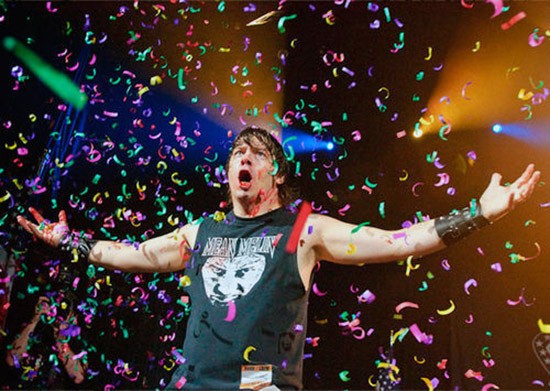 St. Louis sure likes to talk smack on Kansas City's sports teams and entertainment options, but when it comes to air guitar, we may just have to concede defeat.

On August 9, our cross-state rival will host the national finals for U.S. Air Guitar, the official air-guitar association of the United States. After months of competing in roughly twenty qualifying rounds and semi-finals nationwide, the upper echelon of air talent will converge at the Midland in Kansas City to duke it out for a chance to represent the country at the Air Guitar World Championship in Finland. For die-hard air-heads, theatrically shredding on an invisible instrument to Slayer or the Darkness in front of legions of pumped-up fans is a dream come true, and St. Louis' qualifying event played a teensy part in that.

"It was up to someone with the balls (and connections) to make a 2014 qualifier happen in St. Louis," says Eric Melin, who competes as "Mean Melin" and was crowned the 2013 Air Guitar World Champion.

Though the Gateway City achieved liftoff in 2013 during its first-ever official USAG qualifying round at the Firebird, St. Louis' lack of fuel this year caused it to crash and burn. Qualifiers have been held since May in cities from Booklyn to Los Angeles; hell, even Des Moines, Iowa, threw a rager. But St. Louis was one of the few cities to have dropped off the air guitar map, failing to host a qualifier in 2014.

Melin, who lives in Kansas City and emcees qualifying rounds around the country (including last year in St. Louis), explains that air guitar enthusiasts or club talent bookers can approach USAG about licensing, promoting and hosting events (Email qualifiers@usairguitar.com for information). It even appears that USAG had hoped that St. Louis would step up again, as the official schedule still boasts a Gateway City placeholder. That didn't happen, though.

"Someone in St Louis has to keep up with USAG goings-on and know that each spring, there's a call for qualifier shows, and book one," Melin says. "I've put on the last three in Kansas City, and after three years, we're at sellout capacity in a 300 room."

It took a while for Kansas City to become the surprising air guitar mecca that it is today, though.

"[It was] year after year of putting on shows until the word of mouth was too big to be contained by one show!" says Melin, who will defend his World Championship on August 29 in Finland. "Kansas City had 2009, 2011, 2012, 2013 and 2014 competitions, and each time, more people came to see the show and have been amazied at how ridiculously fun and addictive it is."

St. Louis obviously has some catching up to do. During the city's 2013 qualifying event, only about fifteen competitors took the stage as a few dozen curious and enthusiastic fans witnessed the action. Those numbers are low, but every city has to start somewhere. Achieving Kansas City's fame won't be easy, though. According to Melin, St. Louis might need "five years of hardcore air guitar scene-building or a couple of major celebrity judges."

And Melin isn't above taunting a little to stoke the fire in St. Louis.

"I think St. Louis needs a USAG show next year because Kansas City is exploding with talent and St. Louis needs to catch up," Melin says. "You may have the Cardinals and Chuck Berry, but WE have USAG National Finals and the World Champ of Air Guitar!"

For now, Melin is concentrating on defending his World Championship and preparing his halftime show for the national finals in Kansas City. Watch Melin tear up the competition with last year's crowning performance in Oulu, Finland: