Out Every Night: The Best Concerts in St. Louis From July 14 to 20

This week, re-live your '90s obsessions by catching big names like Beck and Jack White. Some other notable happenings include the two-year anniversary of Blank Space DJ spin the Bump & Hustle, Cardiac Arrest's record release pub crawl, and monthly installments of local experimental series NOiSE and Bruxism. Check out these shows and more in our critics' recommendations. 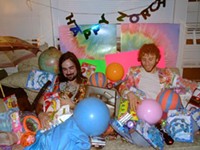 Zorch Monday, July 14 w/ Laika, Jr Clooney @ Lemp Arts Center 8 p.m. | $5 By Joseph Hess From "The Best St. Louis Noise/Experimental Shows: July 2014": While Zorch ventures through the pop realm a bit more than other acts in this column, it's safe to say the band strays off the beaten path. Its slurry of synth and guitar expands through clever layers, and while the drumming is scattered with busy fills, the rhythm stays on point. The duo fires off a full-on aural assault, but it knows the meaning of a good hook. Zorch employs minimal vocals throughout, but the presence of the human voice brings the songs back down to Earth. With this and Jon Mueller's Death Blues on the same night, you have a hard choice to make.

DJ Mahf Tuesday, July 15 @ Pin-Up Bowl 10 p.m. | free By Blair Stiles From the 2013 RFT Music awards: DJ Mahf works from some place in his brain that pumps out enough enthusiasm to make his work look easy. Performing with a chilled zeal, the Indyground DJ interplays dense minutes of thumping samples with crackling movie clips and fine-tuned, one-and-two-handed scratches. He has already banged around Kansas City's spirited Middle of the Map Festival with labelmate Brett Gretzky, crossed the northern American border and cut and pasted for Red Bull's Thre3style competition this year. Whether live or replayed through Indyground's streaming footage, Mahf exudes the enjoyment he feels: In tempo he bobs at the waist, moving faster in the moments when he is inundated with the floor's energy, always looking pleased. It is Mahf's obvious enjoyment of his craft that puts his sets so squarely in the spotlight.

Beck Wednesday, July 16 w/ The Ghost of a Saber Tooth Tiger @ The Pageant 8 p.m. | $55-$75 By Daniel Hill From this show announcement post: Beck has just announced additional dates for his tour in support of Morning Phase, his latest album, which was released in February. The prolific artist will stop by the Pageant on July 16. Morning Phase has been heralded by fans and critics alike since its release, drawing many comparisons to 2002's Sea Change -- in fact, press releases have even claimed that the two should be regarded as companion pieces. Many of the musicians who recorded for Sea Change can be found on the new album as well. Critics are calling the album Beck's best work in years.

Man or Astro-Man? Wednesday, July 16 w/ Sallie Ford, WRAY @ The Firebird 8:30 p.m. | $15 By Joseph Hess The members of Man or Astro-man? would like you to believe that they're aliens sent from space to play surf rock on Earth. In the late '90s, the band even sent out "clones" of itself on tour, so longtime fans should be used to some kind of sci-fi chicanery. Last time Man or Astro-man hit St. Louis, bolts were shot, via a giant Tesla coil, to the ceiling of Blueberry Hill's Duck Room. Other antics included a flaming theremin and the sweet sounds of an Apple Imagewriter II (an ancient computer printer). While Man or Astro-man? has jammed its own take on the surf genre for over twenty years, the band is no stranger to slipping surprises in here and there. More of the same isn't necessarily a bad thing. Defcon 5...4...3...2...1 is Man or Astro-man's first new record in over ten years. While old fans might clamor for classic tunes, it's safe to assume that showgoers will be treated to fresh songs as well.

NOiSE Thursday, July 17 w/ Beauty Pageant, Dave Stone, Stone Hen @ Blank Space 8 p.m. | free By Joseph Hess Back in 2012, when we all thought the world would burn by way of Mayan apocalypse, local artist Mister Ben conceived a monthly concert series. The initial idea had a recurring block of performers playing noise music while videographer Chad Eivins tracked the progress from spring to Halloween. These shows, usually at now-defunct art space Mushmaus, were known to start late and end in the wee hours with a massive group jam. Maybe anti-music isn't the right term, but it's the first that comes to mind. The prodigal son returns in 2014 with much of the same grit and grime. Local heads like legendary sax-player Dave Stone joins newcomers Willis and Mister Ben's own Beauty Pageant for a line-up that's certainly not for everybody, but a spectacle nevertheless. Maybe the term "noise" turns you off? Remember the squares who turned their noses up at punk rock in '60s? Maybe in 30 years, free-form sound art will be used to sell the new Mazda-whatever between episodes of The Real Housewives of NEW New York.

Old Crow Medicine Show Friday, July 18 @ Peabody Opera House 7:30 p.m. | $26-$66 By Roy Kasten With "Wagon Wheel," its first co-write with Bob Dylan, Old Crow Medicine Show did OK (short for "Over a Kazillion" sold). With its second, "Sweet Amarillo," from the new album Remedy, one of the biggest-selling bands in the history of string-band music proves that "Wagon Wheel" wasn't a fluke. Even if "Sweet Amarillo" doesn't become a bar-band staple, the song is a glorious sing-along, with accordion, fiddle, banjo and gang-style harmonies rising to the skies. It's just one of over a dozen danceable, soul-stirring moments on the band's finest hour to date. Last year OCMS was inducted into the Grand Ole Opry; not bad for a band that started out where all good pickers should: playing for tips in front of drug stores.

Bruxism No. 4 Friday, July 18 w/ Wax Fruit, Leech/Cunningham Duo, Hylidae @ Apop Records 9 p.m. | $5 By Joseph Hess From "The Best St. Louis Noise/Experimental Shows: July 2014": Bruxism is a multisensory concert series by Apop Records and local artist Nathan Cook. These concerts occur every six weeks, bringing with them a strong roster of experimental acts focused on the greater St. Louis region. This month's edition features a collaboration between ambient musician Jake Leech and local violinist Alex Cunningham. Combining the haunting timbre of high-pitched strings and layered tones, the duo unfolds a spectrum of noise. Hylidae and Wax Fruit provide a primer on experimental electronica, flipping two sides of the same coin with their own genre bend. This is an apt intro to live ambient work as a whole. While every Bruxism brings new bands and players, the shows do follow a certain tradition. Early birds (meaning the first 30 or so paying patrons) will receive a gift. This month's door prize is a limited 11x17 print by local artist Mister Ben.

Bump & Hustle Two-Year Anniversary Saturday, July 19 w/ DJ Centipede, DJ MAKossa, Hal Greens, DJ Needles @ Blank Space 9 p.m. | $5 By Tara Mahadevan From "The Best St. Louis Hip-Hop Shows: July 2014": If you missed Bump & Hustle's first anniversary, then you're probably a little salty. You're in luck, though, as the second anniversary is just around the corner. This year, San Francisco's DJ Centipede, also known as Mophono, headlines. Centipede got his start experimenting with electronic music genres Thug Jazz and Dirt Wave, soon becoming the foremost authority on both while being known as the most experimental EDM DJ in the Bay Area. St. Louis' DJ MAKossa, Hal Greens and DJ Needles will be joining him, each one playing their own eclectic sets of jazz, funk, hip-hop and blues.

Cardiac Arrest Record Release Pub Crawl Saturday, July 18 w/ Big Zit, Bootskrieg, The Repos @ Livery Company, Fubar, Atomic Cowboy and The Heavy Anchor 8 p.m. | $5-$12 By Daniel Hill From this event preview: St. Louis' long-running hardcore favorite Cardiac Arrest will be releasing its first new material in seven years (and first ever full-length) on Saturday, July 19. Those familiar with frontman Rob Ruzicka -- a longtime booker of punk and hardcore in St. Louis -- know to expect the unexpected, and Ruzicka has delivered. Forget a record release show. How about a record release pub crawl? The LP is called In the Mouth of Madness. In the U.S., it will be a split release between Lumpy Records and Static Circuit Records; in Europe, Even Worse Records and Way Back When Records will put it out.

Jack White Sunday, July 20 w/ Benjamin Booker @ The Fox Theatre 7:30 p.m. | $34.50-$75 By Jaime Lees Over the last couple of decades, Jack White went from fronting his cutesy Detroit two-piece, the White Stripes, to becoming a full-fledged multimedia music mogul in Nashville. It was a slow process, but as White steadily took on new musical projects, made massive financial commitments and founded a few large businesses, he gradually transformed from Motor City kitsch-master to the most culturally relevant Zorro-looking mofo of our time. White's adventures are no longer limited to his own blistering blues, either. His independent label, Third Man Records, has grown exponentially over the past few years and is now considered one of the most respected boutique labels in the country.