In midtown -- just west of Cardinal Glennon Hospital off of South Grand and just a few blocks away from the Grove -- Utopia Studios (3957 Park Avenue; 314-773-3660) manages to remain fairly incognito between busy neighborhoods. If it weren't for the vibrantly painted green building labeled with the company's signature tiki logo, passersby might not even notice that the connecting warehouse spaces were occupied -- and with a daily, rotating roster of musicians making loud noises, at that.

For the past nine-and-a-half years, Utopia has served as a band-rehearsal hall with 26 rentable practice rooms -- both hourly and long-term. Over time it has adapted its space to also function as a recording studio, dance studio, gear-rental headquarters and -- since last year -- a full bar with a colorful lounge to coincide the facility's retro vibe. This Saturday, July 12, it will add another facet to its multipurpose space: a new live-music venue dubbed the Mecca. 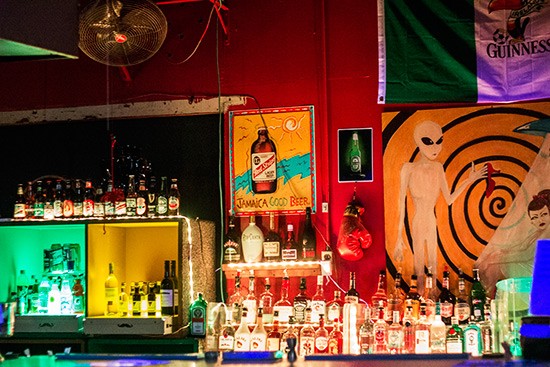 Between its walls, Utopia has parceled out creative space for everyone from Pat Sajak Assassins to Ruka Puff. With the Mecca, Utopia co-owners Amy and Spence Harrison hope to provide a performance stage that reflects the eclecticism of its patrons.

"We used to book our own events before we go into this business, and there have been a lot of events for different things over the years here," says Amy Harrison. "It skims the board -- everything from EDM events and belly-dance workshops to scavenger hunts and even a wedding reception. It seems like the natural progression of things -- offering a sound stage for bands to perform. We really have an opportunity to see the potential of the building and use it for all the things people want to do here."

The core venue space of the Mecca takes up 4,000 square feet of the facility's total 25,000-square-foot capacity, with curtains handy to further divide or expand the room from the adjoining bar and studios. The stage is sixteen feet long by sixteen feet wide and is set three feet off the ground, equipped with a brand-new sound system.

The Mecca holds its inaugural show this Saturday, July 12, with long-time clients the Mercs along with fellow locals Bagheera and the Ottomen. The show starts at 9 p.m. and is free and open to the public. Harrison says other shows are in the works for the near future, and she's hoping to book up the calendar's Saturday nights.

"We're hoping to cater to a large variety -- hoping to do experimental, weird music and world music. Everyone is welcome, but we would love to see non-Western time signatures or really anything that's avant garde and different," says Harrison. "We'll take reggae, dubstep, punk -- just a little bit of everything and not be pigeonholed in one area or another."

Utopia Studios' regular hours for its rehearsal hall and bar are Monday through Saturday from 6 p.m. to 2 a.m. and Sunday from 2 p.m. to 2 a.m. For more information, visit the Utopia Studios website and follow it on Facebook. Read more about the Mecca specifically here.