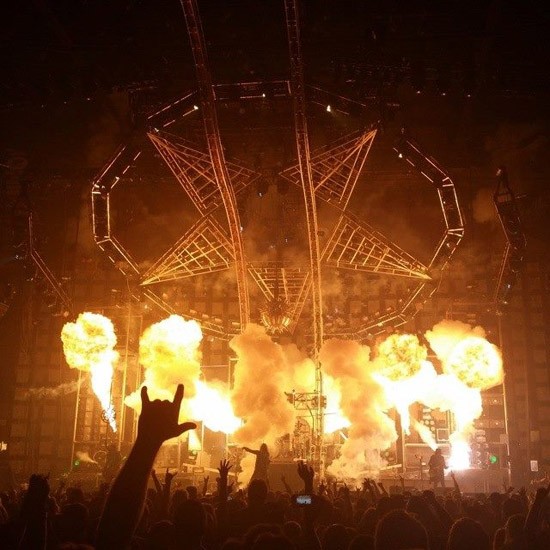 My love affair with Nikki Sixx began in 1985. I was a nine-year-old Catholic schoolgirl -- plaid jumper, Barbie lunchbox, Lisa Frank Trapper Keeper -- and he was the bad boy rocker with jet black hair and a penchant for setting himself on fire. It was an unlikely match, one sparked by my mom's odd willingness to let me sit in front of MTV and watch long-haired, leather-clad men swill Jack Daniels (so long as I got my homework done). Yet here we are, thirty years later -- after all of the affairs, booze, failed marriages, his heroin overdose, my brief dalliance with electronica -- as strong as we were when our eyes met over the small screen to the tune of "Home Sweet Home."

But last night, I had to say goodbye.

Motley Crue rolled its roving spectacle into Verizon Wireless Amphitheater yesterday evening for the St. Louis stop of, at least what is billed as, their final All Good Things Must Come to an End tour. No really, says the band. This is it. The last time Crue-heads will ever flick their Bics (come on -- this crowd wouldn't dare use cell phones) while singing "Without You." The last time for all of the girls girls girls to expose their bare breasts (albeit decidedly lower hanging ones) from the audience. The last time to cheer as Tommy Lee performs a virtual Cirque de Soleil drum solo over the audience, no matter how many times he's already done it (No, bro. This tour was really epic). The last time to see Nikki...well...to see Nikki.

And so, fans of the Crue filed, stumbled and staggered into Verizon with a mix of anticipation and nostalgia. The air had the feel of a free-spirited dead uncle's funeral -- the one who made you promise to "just have a giant party and get drunk." Sure, they came to hear the songs and to relive their glory days, but mostly, they were there to pay their respects. Judging from the Crue's waning performance energy, it's clear it was time.

The Crue played a set that sounded like a greatest hits soundtrack to their 33 years as a band. The show opened with one of their later songs, "Saints of Los Angeles," and what at first seemed like technical difficulties with the vocals. It became clear during the second song, "Wild Side," that the difficulties were with vocalist Vince Neil. Neil dragged behind the music, at times singing what seemed like incorrect lyrics and at others, letting the crowed do all of the vocal work for him. He was so off that he took the wind out of the sails on "Primal Scream," turning the song from an anthem to a whisper. Fortunately, Neil got it together after waxing poetically to the crowd about the band's many years together, with a spirited performance of "Same Ol' Situation." (Sixx later explained that Neil was late to the band's first ever band practice, back in 1981. Was this a jab?)

Despite Neil's and Sixx's "thanks for the memories" monologues, the show lacked the urgency one would hope for when seeing a favorite band for the last time. There was little interaction with the crowd and, tellingly, between the band members on stage. Highlights of the show included nuggets from the band's first two albums. From "Looks that Kill" to "Too Fast for Love," they showed the younger fans in the crowd -- there were surprisingly plenty -- what it was like on the early 1980s Sunset Strip. Bassist Nikki Sixx even paid tribute to his days of lighting himself on fire, although this time he used a flame-shooting bass instead of leather pants and gasoline. Apparently, with age comes wisdom.

On "Kickstart My Heart," Neil proved that when he wants to, he can wail. So did Mick Mars. Form someone who makes the Crypt Keeper look sprightly, his guitar prowess stole the show -- overshadowed only by the pyrotechnics, flames and giant red pentagram that hung over the stage.

For an encore, the band surprised the crowd by playing their power ballad "Home Sweet Home" from an elevating stage in the middle of the seats. Drummer Tommy Lee kicked off the song at the piano, then raced to his drum kit while the stage rose above the crowd. Neil sounded his best during this song, as if he knew it was coming to an end and wanted to give the crowd what they came for.

I'm not sure if I consider last night closure. Sure, there were final words and a few tears, but it wasn't the goodbye I had in mind. Still, it was clear this was the end of the road for Nikki and I. As bleary-eyed fans made their way back to the parking lot, some still singing along to the permanent Crue soundtrack that plays in their heads -- hopefully performed better than the show they just witnessed -- I knew that each and every one of us said our own special goodbye last night. It was never going to be pretty. Breakups never are.