Budweiser's "Made in America" Concert at the Pageant Was Kinda Epic 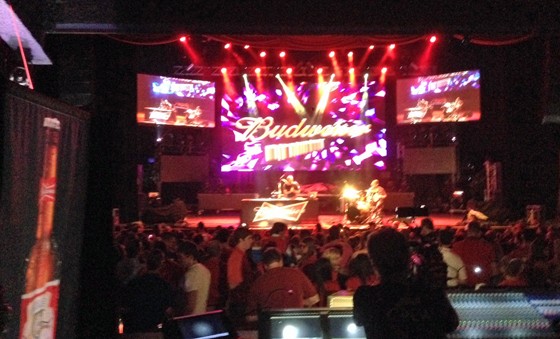 Forgive us for not getting this review up the day after Budweiser put on its "Made in America" concert featuring Girl Talk and the Floozies. But with free Budweisers being tossed about the Pageant like Dubble Bubble at a kiddie parade, we were in no condition yesterday to write anything remotely intelligible.

See also: See Girl Talk at the Pageant for Free, Courtesy of Budweiser

So, now that we've had a day to come to our senses, let us unequivocally state the following: Budweiser's "Made in America" pit stop through St. Louis on Tuesday was -- if not the best concert of the summer -- certainly the best party of the season.

And it wasn't just because of all those free bowtie cans of Budweiser (though they certainly helped). No, it was also the free tickets, the free food (Imo's, Strange Donuts) and the bespectacled crowd in ridiculous 3-D glasses -- the ones that made it appear as though an enormous draft Budweiser was hovering above the dance floor. (The writers of the The Simpsons would be hard pressed to dream up a more outrageous, subliminal marketing gimmick for Duff beer). 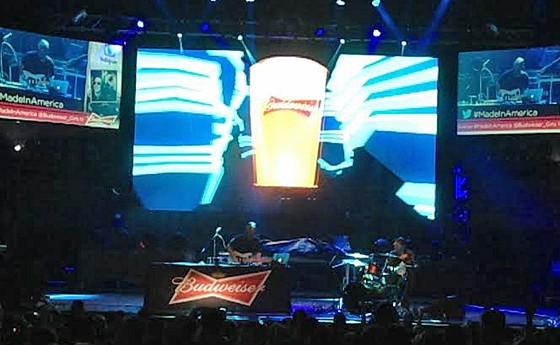 But how about the music, you ask? Anyone who's ever seen Girl Talk knows that deejay Gregg Gillis always puts on a spectacle. Sure, it's just him and his MacBook, mashing up hip-hop and pop (50 Cent, Nine Inch Nails, Beyonce, Aerosmith) into high-energy dance tracks. But add a few hundred fans bouncing around onstage with him, toss in a couple confetti cannons and pour in an infinity Budweiser, and voilà! You got yourselves a party, people.

Opening act the Floozies -- an electronic duo out of Lawrence, Kansas -- was equally entertaining and scored perhaps the biggest cheers of the night with its techno re-workings of Toto's "Africa" and, even more challenging, the Doobie Brothers' "Black Water."

You'd like to hear some funky Dixieland? Really? OK, this is #MadeInAmerica, dammit. Do what you please.

But, hey, don't just take our word for how incredibly fun and over the top Tuesday's show was. Check out what our newfound Buds have to say:

#MadeInAmerica #Budweiser I don't want this night to end! #stl

Dancing my tits off in the pit #madeinamerica @girltalk @Budweiser

@Budweiser @TheFlooziesDuo so sick. #MadeInAmerica epic birthday night for me. Thank you everyone who made this happen!