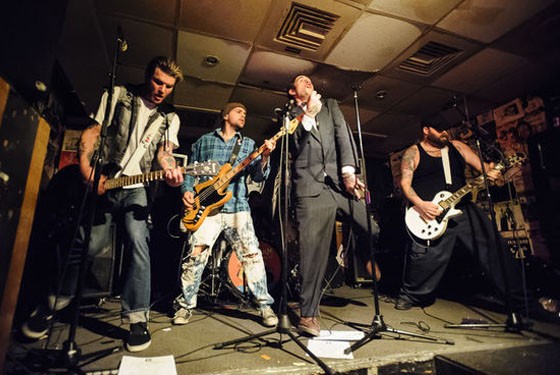 by Joseph Hess and Mabel Suen

"Like anything, there are ups and downs. When there are more downs, it's time to get out. I'm just exhausted," says Michael Gross, former owner of Lemmons, beloved south-city spot for punk rock and pizza. The dive bar closed last week to the surprise, and dismay, of many.

Throughout the course of twelve years, Lemmons was carried on the back of its bartenders, bookers and local bands. Though the spot served well enough as an off-kilter sports bar, its real identity came from live music.

"If we've got alternative music, it's not a terrific blend with a sports-bar crowd," Gross explains. "Separate the two and it does pretty well."

With this in mind, Lemmons opened in early 2002 as a three-story space. The top floor hosted private parties while the main floor functioned as a bar. But the real fun happened in the building's smoky basement. Early shows were booked by CaveofswordS' Sunyatta McDermott, who brought in an eclectic mix -- a practice that would stand the test of time.

"I would have put all Journey and Kansas cover bands in there, and it would have been just me and three of my drunk buddies in the crowd," Gross explains with a laugh. "What I decided to do, in my moment of sanity, was let people with good music taste go ahead and do the booking."

Roughly six months in, the St. Louis fire marshal axed the basement gigs and, for a brief time, Lemmons tried to operate without a musical component. This experiment didn't last -- for Gross and his staff, the lack of a soundtrack took the soul out of the bar. Employees built a stage for the main floor and merged the concert crowd with the barflies -- for better and for worse.

Local bookers like Brian Fleschute, Daren Gratton and the late Jamie Foehner were just a few key names at the heart of Lemmons' music side. Through their work, many young acts had a spot to play their first show. Touring bands from out of state (and some from abroad) were brought in every week and livened up the dive with rock, metal, indie, folk and, most commonly, punk music.

Read on for an oral history on music at Lemmons.

Though Gross says business had been down in recent times, Lemmons has left its greasy pizza stain on the St. Louis scene. And as with any community, it's the people who matter most. We've plucked a few stories from former employees, local musicians and Lemmons devotees. Their words give a glimpse of the space and the people who loved (or loved to hate) it.

Sunyatta McDermott (CaveofswordS, early Lemmons concert booker): I was given the position of booking agent and helped build the stage. Jason Hutto took the job of sound man and made the room sound incredible. For the next year or so, we were bringing excellent touring bands from all over the U.S. and overseas, with locals supporting them. It was super fun.

And out of nowhere the fire marshal came and shut us down. It was really heartbreaking. After that, all the gear was moved upstairs to that weird, awkward room. I've seen good shows there, of course, but you had to be within the seven inches in front of the stage. It isn't a room for music -- any sound engineer would say that.

Denny Dyer (Black For a Second, Winchester, former Lemmons cook): For me, Lemmons had always been about music. A lot of the bands and musicians I know today I probably know from working there. At one point in time, I think we may have had six to seven bass players on staff. I've played a lot of shows there over the years with a ton of amazing local bands. Even when shows weren't being performed, you could usually find some local musicians at the bar talking shop.

Rob Ruzicka (Cardiac Arrest): One time, a certain friend got too drunk and passed out in the corner by the sound board -- he might even have been DJing that night. Well, anyone who is friends with this person knows that once he is out, he is out. So rather than immediately eject him -- knowing that it would be a futile, time-consuming effort -- the staff finished up the night. Since he was in such an out-of-the-way corner, and due to the fact that he is a sound, immobile sleeper, everyone soon forgot about him during the closing-up process.

The employees locked up, set the alarm and went home, never giving him another thought. The next morning, one of the employees got a call from the owner: "Why is there a man sleeping in the corner?!" Rather than get mad, the owner was completely amazed that the friend had slept completely motionless for the past six hours, never setting off the alarm.

Ellen Cook (Ellen the Felon): I had a band with a couple of friends in which we all wore tutus. We were called the Maladys, and our show at Lemmons with Quief Quota and Jack Topht and the Vegetables was our first and last. We had a song called "Stick Your Tower in My Grove" and another called "Lot Lizard" about a truck driver and a prostitute. We had a total of, maybe, my boyfriend and a few other people in the audience, but it was a great show and a lot of fun.

K Robert Schlüter (the Lonely Procession): The Lonely Procession played at Lemmons once in 2009. We did our thing for roughly twenty minutes, and then the house music came on over the PA -- I think it was Skynyrd or something -- and a guy sitting at the bar yelled out, "THANK GOD!" with such relief to not have to listen to these two idiots anymore that his words swept through the entire bar with palpable force.

Daren Gratton (the Haddonfields, former Lemmons concert booker): Nighthawk and I decided to have a weekend party celebrating ten years of Dudes Magazine and had all of our friends' bands play. Come to think of it, I don't remember nearly as much as I should. Basically, seeing Lemmons live up to its potential was amazing.... I worked my butt off so I could have the time of my life, but I got yelled at every single day I worked there. Good riddance.

Brian Fleschute (Pat Sajak Assassins, former Lemmons concert booker): When I started booking, things were really great because there were only like five venues around at the time. Toward the end, there were upwards of twenty. A couple of my favorite shows were for touring bands Kuan and Cave, but locals like Skarekrau Radio would always push the limits, jumping up on tables with masks and instruments on -- and nothing else. I was also really happy with the benefit shows we were able to put on there for natural-disaster relief, Even Chance pit bull rescue and helping out friends with medical bills.

Bobbi Jo Leykam (former Lemmons bartender): I first remember hearing about Lemmons ten years ago when Rob Severson [of Pancake Productions] asked me to drive him there in an attempt to verify the rumor of this free-pizza night he'd heard about. Back then it seemed that Lemmons was in this odd, out-of-the-way corner of the city.

Lemmons, to me -- and I think for many people -- was kind of a home base. If you were making serious plans for a night out, it probably wasn't to go to Lemmons, but you were likely to end up there afterward, where you were almost guaranteed to find someone to have a last drink with.

Sean Ballard (Stonechat, recent hire): I just accepted a position booking and running sound for Lemmons.... They didn't tell me it was closed.