Bethany Cosentino of Best Coast writes sunny indie-pop that traditionally has drawn from bands like Fleetwood Mac and the Beach Boys. Right now, however, she's feeling inspiration from a more unlikely source.

"As cool as I want everybody to think I am, I don't care: I think Sugar Ray has written some really great songs," said Cosentino, in a recent interview with Spin.

Sure, Newport Beach's own Sugar Ray is mostly remembered for popularizing frosted tips with chin goatees, and making aggressive gestures next to swimming pools. (That and its dopey 1997 smash hit "Fly.")

But you know what? We respect Cosentino, and therefore decided to dig deep into the Sugar Ray catalog. Here, then, are its five best songs.

5. "Answer the Phone" 2001 After the lame Creed-tinged intro, "Answer the Phone" has a nice pop-punk flavor that could be confused for another Best Coast influence: Blink 182. The roaring chorus is catchy and, hey, the song also mentions roller coasters, which is never a bad thing. Maybe Cosentino's onto something!

4. "Mean Machine" 1995 This one is different! It's one of Sugar Ray's "hardest" songs, and it includes a Mick Mars-influenced guitar intro. So that's something! 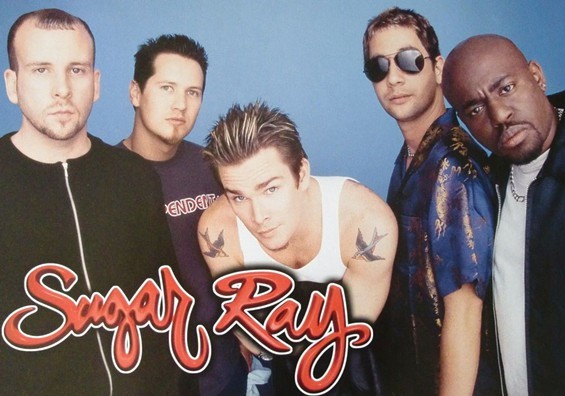 ...OK, sorry, we're letting you down here. We can't find a No. 2 either. We thought about maybe "RPM," but that's a gawdawful abortion.

1. Bethany what were you thinking?

Well, at least she explicitly denies that we have anything to fear on the next Best Coast album. "The record is not going to sound like a Sugar Ray record," she said in the Spin interview. "But it's definitely something we were talking about a lot while we were in the studio."

Sugar Ray will perform this Wednesday, July 2. at Liberty Bank Amphitheater in Alton, Illinois. Smash Mouth, Uncle Kracker and Sister Hazel will perform as well. Tickets are $28.50 to $60, if you can believe it.