The Ten Best Concerts in St. Louis This Weekend: June 27 to 29 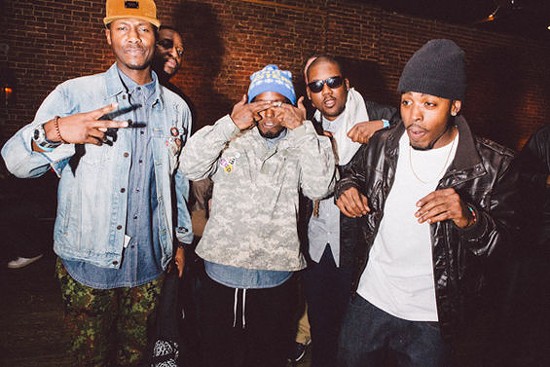 There's no shortage of fests and fun this weekend. Choose from the Whiskey War Festival, the Saint Louis Underground Music Festival and PrideFest downtown or in Tower Grove. Read on for details of each, and consider catching another show or two. Ellen the Felon throws a birthday party at the Engine Room, several talented local artists assemble to put on a tribute to Native Tongues and much more.

Frank Hurricane w/ Zebu, Fred Friction, Tim Garrigan, Zak M @ Los Punk 8 p.m. | $5 Says Zak M, who booked the show: "I know I'm not the only one in this town who finds marathon shows painful. But I'm probably not the only one who also finds pain exciting." This quintuple bill features an evening of songwriters from in and out of town. Grab a beer, pull up a chair. More info on the performers here. (MS)

Tribute to Native Tongues w/ Jia Davis, Brett Gretzky, Mathias & the Pirates with Superhero Killer, Doorway, 12 to 6 Movement, Big Brother Thunder & the Master Blasters, Vinny Bee, DJ Mahf @ The Gramophone 9 p.m. | $7/$10 Think of this as a warm-up for SLUM Fest. Between the two events you will have seen a huge slice of St. Louis' finest hip-hop acts. (DH)

Dog Fashion Disco w/ Psychostick, The Bunny the Bear @ Fubar 6:30 p.m. | $15 Experimental metal, back from the dead! In case you missed it, DFD is fully reunited as of October. (DH)

Also on Friday, check out Bruce Robison and Kelly Willis at Off Broadway and 18andCounting with Home Body and more at Foam. Just click the links for more info.

Ellen the Felon Birthday Show w/ Tiger Rider, Whiskey Ginger, Matt Harnish's Pink Guitar, The Defeated County @ The Engine Room 8 p.m. | $5 Ellen celebrates her golden birthday with an evening of music with some of her favorite musical friends as well as a drag show by Hypatia de DeBeavoir. Dress code: "Gold attire and no pants." (MS)

For a couple more options to choose from, consider the Whiskey War Festival or Travi$ Scott at the Ready Room.

Ed Schrader's Music Beat also comes to town, capping off the weekend on Sunday. Check them out at Apop Records.