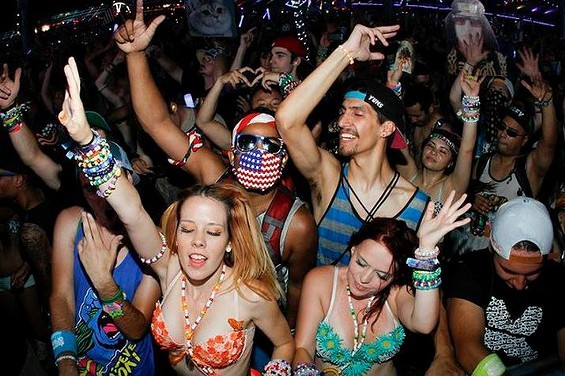 What's it like partying with 134,000 of your closest friends?

This is the definition of massive. That this culture has gone from warehouse raves with one laser and a few hundred people to a 1,500-acre event so large that the only way to avoid an hour-plus worth of traffic is to arrive by helicopter is astonishing, especially if you were part of the scene in its early days:

What's not to like? We'll start with the worst:

5. Traffic Getting 134,000 people, plus festival workers and artists, in and out of the Las Vegas Motor Speedway each night is, as you can imagine, not easy. Our hour-plus wait to leave as thousands of vehicles were bottle-necked into one exit bordered on exhaust-fume torture.

4. Beer Mobile vendors only offered variations of Bud Light, the festival's beer sponsor. Ugh. If you sauntered up to an alcohol booth, you got one more choice, which was an okay Belgian white ale (Shock Top, also part of the Anheuser Busch family). People paid $249-plus for three-day passes, not to mention their other expenses. Shouldn't they get some decent beer options?

3. Parking EDC still has free parking for all those cars, but it's often in unmarked, far-off dirt portions of the race track's grounds. Section signage (A1, B1, etc.) offers some help, but landmarks are few and far between, and your exit will inevitably end with the EDC tradition of wandering the desert like a lost tribesman. Some zonked-out festival-goers put miles on their pedometer apps, to be sure. And ravers will inevitably encounter other lost souls, incessantly clicking their key fobs in a fruitless effort to find the flashing beacons. Temporary section flags with creative themes (a Steve Aoki section could be designated by a cake) would be a welcome addition.

2. Cell signalOur AT&T smartphone served as little more than a paperweight this year. While data was slow to move in years past, it was never this bad. Blame, perhaps, the fact that 134,000-plus others were also trying to post their EDC selfies. Organizers should borrow a page from Coachella's book: Promoters at the the Indio, California alt fest teamed up with AT&T, which installed COWs, or Cell on Wheels, mobile cell sites. Wi-fi was also offered for free to AT&T customers at the California desert event.

1.  The musicWe feel like electronic dance music is on the precipice of a serious backlash. Some of the headliners (Avicii, Martin Garrix, Krewella) play what can only be described as atrocious, hook-obsessed, bubble-gum trance. This scene needs to decide if it's part of the mainstream or it isn't.

But trying to be both will pull it apart. We don't blame the organizers for booking marquee names (though Deadmau5 and Skrillex have been strangely absent). Competition, like Tomorrowland, is pushing EDM promoters to go lowest-common-denominator with their bookings. It's hard to please 134,000 people. But it's a shame that this music has gotten so far away from its heads-down, warehouse roots.

Next: The best things about EDC Vegas this year 5. Traffic Yes, we said that getting out of the Las Vegas Motor Speedway was torturous. But getting in was smoother than ever. After three years of practice, organizers and local cops seem to have perfected the art of getting tens of thousands of cars into the race track's lots. What in years past was a two-hour (!) trek for EDC was this year pared to one hour for us. Bravo.

4. Parties When EDC moved to Las Vegas from Los Angeles in 2011, word was that organizers wanted to expand the weekend into a week-long dance music industry soiree not unlike Miami's defunct Winter Music Conference. While promoters have been somewhat successful, adding its weekday EDMBiz conference to the schedule, what has really broadened the appeal of EDC is the superstar DJ talent on the strip. Vegas' poolside day parties are simply off the chain. EDC organizers have been wise not to demand exclusivity from some of their headliners, and the presence of top-name acts at clubs on the strip only adds value and appeal to what is becoming known as EDC Weekend. The professional staff at Marquee Dayclub, along with the publicist for DJ Destructo, were kind enough to have us as their guest Saturday. It was a surreal spectacle: Bikini- and board shorts-clad revelers splashed in the pool like giddy children as Kaskade played his naturally sweetened take on house music.

3. People This might not be a "rave" anymore, but EDC, despite its ginormity, still comprises a community of ravers. We said previously that a sense of us vs. them still exists in this scene. And whether you need a bottle of water, a cigarette, a stick of gum, food, a lap to chill on, a hug, or a toke of weed, you might just be offered whatever you desire. PLUR lives. 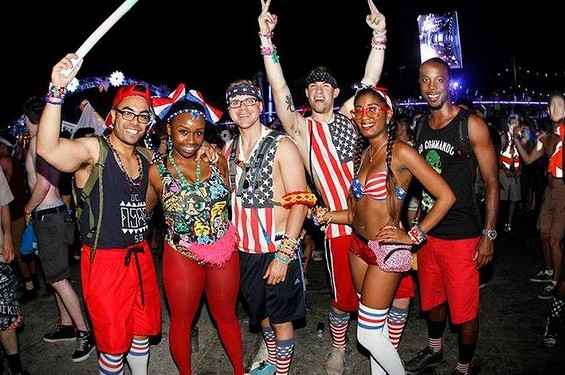 2. The EDC app What cool technology. Once just an electronic version of those old square-fold guides, the EDC Las Vegas 2014 app was an industry leader. You can look up your favorite artist, create an itinerary, share your on-site plans with Facebook friends, and most importantly, be shown exactly where on the vast festival grounds you are at any moment, making it easier to head to your next stage. (Too bad that because of of mobile data service, the app was mostly useless for us this year.)

1. Music We find much of what passes for electronic dance and house music these days (Avicii, Afrojack, Zedd) to be unbearable. Too many members of the current crop of EDM hit-makers are fly-by-night comers obsessed with hooks and ignorant to the proper flow and crowd control of DJing. That said, EDC's promoters, who started in the warehouse scene more than 20 years ago, have gone out of their way to make good stuff available. Loco Dice and Dubfire played sizzling tech-house sets. And Diplo dazzled with his cut-and-paste bass (and accompanying twerk team). As we spotted ravers streaming from the performances of some of the more chart-obsessed artists on the bill (Martin Garrix), we were left with a solid sense of hope. Because, if you want to see, hear and taste what EDM in America is about in 2014, there's no other place than Electric Daisy Carnival Las Vegas.