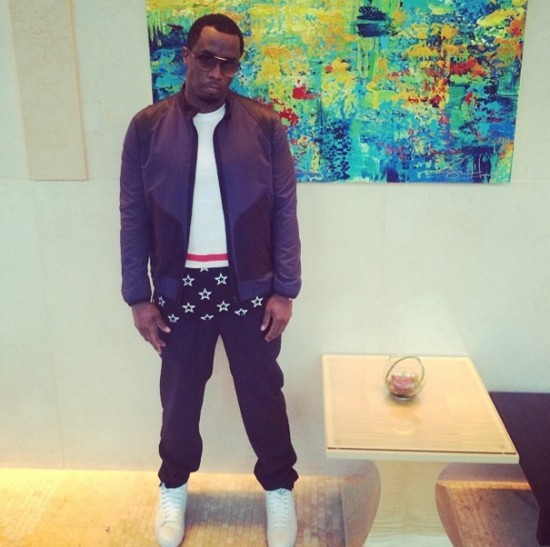 Everybody enjoys playing tourist when they're in St. Louis, and rapper P. Diddy is no exception.

His royal Puffyness. was in town June 8 to throw a birthday party for St. Louis promoter LooseCannon S.L.I.M. at the Coliseum. But before the shindig, he managed to catch a few sights, including admiring the work of local artist Jennifer Hayes.

Diddy shared a photo of himself on Instagram standing near some colorful abstract art. Eagle-eyed friends of Hayes' quickly deduced that the artwork was one of her pieces on display at the Four Seasons Hotel and Resort in downtown St. Louis and rushed to tell the artist.

"There it was, totally surreal -- Diddy standing in front of my painting Beach Dreams in the entry of the Four Seasons!" Hayes tells RFT Music. "I'm guessing that means he likes it. Hopefully I made him smile on the inside!"

A prolific artist whose work has been shown nationwide, Hayes began exhibiting her art at the Four Seasons at the beginning of the year, saying that "the beautiful, clean, modern interior is a stellar setting for my work."

But though Hayes has a number of high-profile clients, Diddy's admiration of Beach Dreams was a pleasant surprise.

"I often have friends and clients post pictures that they took of themselves in front of my paintings, but what happened Sunday night was on a totally different level," says Hayes, whose Beach Dreams and other original artwork can be purchased through www.JenniferHayesSTL.com.

But Diddy's visit to St. Louis wasn't just about art, of course. He heavily promoted his party for LooseCannon S.L.I.M. and invited the public:

Would you like to see the private plane Diddy travels in?

While in the Gateway City, Diddy caught up with Ozzie Smith, former St. Louis Cardinals shortshop and town do-gooder:

Diddy even had an official song for his friend's birthday weekend:

We can't wait to see what Diddy does for his friend LooseCannon S.L.I.M. next year!