The Lion's Daughter's New Split EP Is For the Dogs

St. Louis' premier peddlers of metallic misery the Lion's Daughter teamed up with Memphis metallic hardcore outfit Nights Like These to release a split seven-inch serving one of the noblest of causes: All proceeds will go to benefit stray dog and cat organizations in both bands' hometowns. And when they say "all" they mean it -- the money from sales of the record and at the door for the release show this Saturday at the Ready Room will all be donated.

Even the recording work and art was done pro bono, to maximize the potential donation. And if that doesn't pique your interest, perhaps the fact that this is Nights Like These's first recording in eight years will sell you.

TLD's press release sums up the mission statement of this project in appropriately metal fashion. Says vocalist Rick Giordano, "This record gives us an opportunity to release a new song, put out a seven-inch with a great band of old friends and most importantly contribute funds to an organization that saves the lives of awesome creatures who, in our opinion, are far superior to humans." 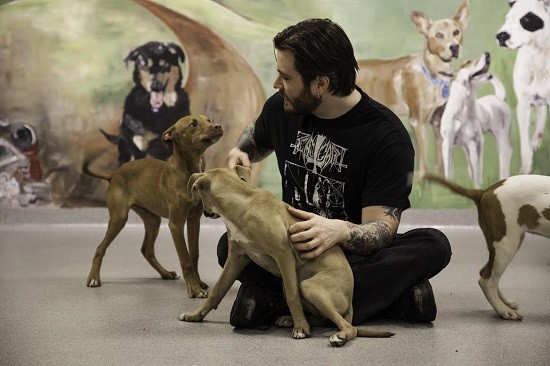 We spoke with Giordano (who is also a sometimes-contributor to RFT Music) to learn a little bit more about the project.

Daniel Hill: Where did you guys get the idea to donate all of the proceeds from this record to animal shelters?

Rick Giordano: We've been wanting to do something for Stray Rescue for a while now, and cruelty towards dogs in this city has just gotten completely out of control lately. A benefit show seemed like the obvious way to go, but we figured why just stop there? We had already been talking about doing a split with Nights Like These and this seemed like a perfect opportunity to do something really cool. Once we got sponsors to donate and cover pressing costs, and great dudes like Gabe Usery and Josh Rowan to contribute their talents for free, we figured out that we could donate every cent from these records without having to recoup anything first. It's a win on every level.

Do the members of the band have animals?

Yep, we all have dogs and cats, most of which are rescues. My dog Lizzy was found under an abandoned house by Stray Rescue and she's about the greatest thing on Earth. I'll be forever in Stray Rescue's debt for saving her and introducing the two of us.

How did you guys get hooked up with Nights Like These? Are they intending to release more material after this, or was this just a one-time thing?

We know those guys from way back when Erik and I's old band used to tour with them. And the very first Lion's Daughter show was actually with them back in 2007. Great band, and great bunch of dudes. I believe they are writing and recording a new album, and then maybe calling it a day again from what I understand. This will probably be the last time you'll ever see them in St. Louis.

You are playing another release show for this in Memphis next week, correct? Is all the money from that show going to shelters as well?

Yes, and yes, at the Hi Tone. 100% of the door and record sales will be going to Blue Sky Rescue, the Streetdog Foundation and Bailey Arms Animal Rescue. Extremely excited about this one. Memphis fucking rules and we always get treated really well down there. Glad to be able to help raise some funds for the southern pups.

What could other animal-loving musicians that want to help do to get involved?

Benefit shows are always a great idea. Or you could record a song or two and sell digital downloads and donate the funds. Spread awareness via social media, info at shows, wherever you can. Get creative. Your band is able to gain people's attention and generate income, therefore there's something you can do. No matter how small, every bit helps.

Treat animals better. Stop being so selfish and do something to help some creatures that can't always help themselves. Even if you're not a music fan or don't give a shit about our band or whatever you can still head over to strayrescue.org and make a donation. Give a stray animal a loving home and see how it changes your life. Respect the dog. Respect the cat. Regard abuse and neglect as the unacceptable horrors that they are. Don't be an asshole.