Charting the Arc of Big Star With Drummer Jody Stephens 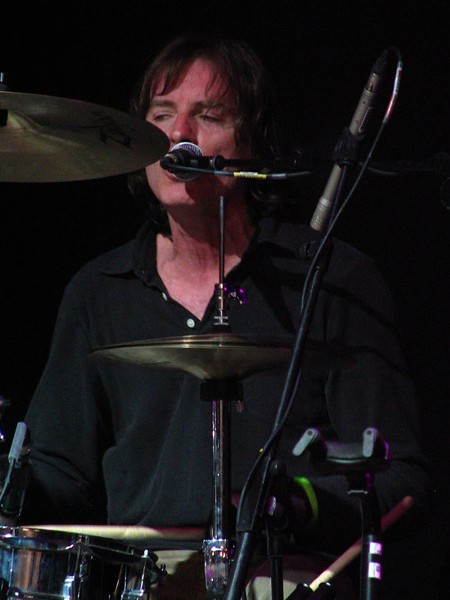 Big Star, it's said, was a band ahead of its time. But it's more true to say the band was out of its time, or maybe just out of time, period. Officially formed in 1971, the Memphis-based band featured two creative forces, Chris Bell and Alex Chilton, and the music they made together, and eventually apart, was so melodic, so exhilarating, with a rawness to the wide spectrum of emotions - sometimes fragile, sometimes spiritual, sometimes snarling -- and with harmonies and instrumental passages that echo in the air and sparkle there, its three records, recorded in a scant three years time, remain touchstones and talismans for hundreds of rock & rollers and power-popsters after them.

At the time, of course, few bought the band's records, largely because few could find them. Cursed by record label politics, if not outright malpractice, Big Star never found the audience it deserved. A few latter-day fans were lucky enough to see the band perform at the rare reunion gig, including a legendary show (released as a live recording) in Columbia, Missouri in 1993 that featured original members Alex Chilton and Jody Stephens backed by Jonathan Auer and Ken Stringfellow of the Posies. Critics and musicians championed Big Star, but with the death of Chilton in 2010, the band ran out time it never really had to begin with.

Since Chilton's passing, original drummer Jody Stephens has made it his mission to keep talking about and keep performing the music of Big Star. Stephens' last appearance in St. Louis was with the reconfigured group at a Southern Comfort-sponsored festival in 2006. This Friday, Stephens will take part in an evening in honor of Big Star at the Stage at KDHX (where I'm a DJ and Web Editor). The night will feature a screening of the documentary "Big Star: Nothing Can Hurt Me," along with a Q&A with Stephens and a performance by members of Magnolia Summer and the Feed, with Stephens joining in on drums.

I reached Stephens by phone at his home in Memphis to talk about the timeless music he made with Big Star.

Roy Kasten: Let's begin with where you work now, Ardent Studios. Before moving to the current Ardent location, Big Star recorded its first album at the original studio on National Street. What was special about that original studio?

Jody Stephens: We tracked at the studio on National and then we moved into our current location over the Thanksgiving weekend in 1971, and completed overdubs and mixed at the new location. The studio on National was my first introduction to a real, live recording studio, so to speak. There is some nostalgia for that studio. When I first walked in the door, Chris Bell and Steve Ray [who left the nascent band before Chilton's arrival] were working on a song called "All I See Is You"; it was for a group they were calling Ice Water. There was something special about National, and then something incredibly exciting about moving to the new studio at 2000 Madison, where it is now. We worked in the off hours, and at the time we were working around people like the Staple Singers, Tony Joe White and I think Led Zeppelin was mixing its third album, unbeknownst to us.

I was watching the Big Star documentary a few days back, and one of the things you talked about is how Big Star, as a band, came to be in the studio. Can you explain what you meant by that?

We were very much a band that evolved in the studio. We all came together there, even the first time in meeting, and from that we did go to Chris Bell's back house and jammed a bit, but outside of that it was the off hours in the studio, experimenting with recording. At that point, Chris Bell could engineer, and Steve Ray and Andy Hummel [the band's original bassist] too. We started to do the odd gig with friends who were having parties; we'd show up and play some songs: James Gang, Led Zeppelin and Beatles covers.

The records are beautifully recorded; they just sound really good.

That was John Fry [producer and engineer who founded Ardent]. He had this amazing touch and incredible ear behind the console. He knew how to make things sparkle. I A-Bed #1 Record with other records at that time, and sonically, John's mixes and recordings really shined with what I compared them to.

It could be the early Ice Water stuff sounds like a band tinkering in the studio, but #1 Record and Radio City were pretty well rehearsed, and they were cut as a band. On Radio City, we would go in and we'd track live as a band. The tinkering came with Alex. Jim Dickinson relates the story of getting the song "Kangaroo" from Alex, just vocal and acoustic guitar. And Alex says: "Produce this, Mr. Producer." So on that, Jim added in most all the other instruments. It's interesting, the way that song holds together; it's Alex and acoustic guitar, that was the original recording, and then Jim adds to that recording. It's playing around that nucleus. I don't know how you could follow Alex if they were going down at the same time as all the other things. You would have to really get a feel for Alex's performance before you could follow it. I think the only way to do it is to follow a track that's already there.

You've said before that the Big Star records, and the songs, captured where the members were at that given time. But that's harder than it sounds. You have to show where you are and not tell it.

That's why the records are charmed for me. It didn't tell; everything was related in the lyrical nuances and the musical tracks.

It's well known how Big Star faced serious problems with distribution. You had all kinds of promotion, notices in the press that most bands would kill for. Do you know why the records were never distributed?

I suppose it depends on what point. Al Bell [co-owner of Stax, which had absorbed Ardent] did a deal with Clive Davis at Columbia, and shortly after that Clive left Columbia. Al had lost his champion. Columbia wasn't that interested after that. The secondary and tertiary artists were overlooked; it wasn't in the interest of the label. It's just guesswork on my part. It wasn't unique to us. It happens to artists in general. You have an A&R guy who is your champion, and then he gets let go, and then the band is floundering at the label.

The good thing is that John King, the album promotions guy at Ardent, got it to all the rock writers: Cameron Crowe, Lester Bangs, Bud Scoppa, all the primary writers. Cameron Crowe was sixteen or seventeen at the time. They all said good things about it, and that's kind of why we have an audience now. People into music were reading those publications, and even though it was hard to find, they were seeking it out. You couldn't call it up on Spotify. It might have taken a minute, but when guys like Mike Mills and Peter Buck found it, they would talk about it.

Why did you stick with the band, especially with Alex, after all you all had been through?

For me, even though the third album was a dark period for Alex, he was still writing these brilliant songs: "Blue Moon," "Take Care" and "Thank You Friends." That was the attraction for me. The songs. It wasn't necessarily anything else. He was just writing these great songs. It was also the opportunity to get back into the studio and do more work with John Fry, and to participate more in the studio experience than I had on the first two records.

In recent years you've done shows with Chris Stamey from the dB's, Mike Mills from R.E.M., Mitch Easter from Let's Active, and Ken Stringfellow from the Posies performing the third album.

It was Chris' idea to do that, probably in 2009. He approached John Fry and me. We thought it was impractical, because of the expense, and the focus and tenacity of whoever it was that would try to put it together. To make a long story short, we underestimated the organizational skills of Chris Stamey -- in a big, big way. After Alex died, it took on a new mission for me. I thought it would be a great way to continue performing these great songs of Alex.

I wanted to ask you about the song "O My Soul," which, I think of all the Big Star songs, is really driven by the drumming. I don't think I've ever heard another rock & roll song that has such drumming. It's incredibly free and expressive, and you seem to play every verse, every section differently, almost as if you're having this very dynamic conversation with Alex's guitar and singing. Do you remember working on that song?

That's kind of cool. That's the way I've always thought of drumming. I would take my leads more from Alex and Chris, more than from Andy. Andy came up with some cool bass parts, but I was never a bass-centered drummer. I always thought there was a way to build a song, that you wouldn't play the first verse and the first chorus the way you would the second; you might do something extra. I would just build it by feel. Another song I did that on was "The Ballad of El Goodo." That's just the way I played. With "O My Soul," I had taken, I guess, a percussion class at the University of Memphis. And I was reintroduced to flams and paradiddles and stuff. It was just at the right time we were recording Radio City and "O My Soul," so that found its way into that really easily. That song is so much fun, but it is a challenge play.

You've been working at Ardent Studios since 1987. What's your current role?

We have this little label called Ardent Music. Our current release is by the Greyhounds, two just amazingly engaging, charismatic guys, Anthony Farrell and Andrew Trube. They have a drummer with them too, depending on who is available. They have something special going with them. They're from Austin and the recordings were done there. Their new album is called Accumulator. I'm so proud of those guys. I feel lucky to be part of the project.