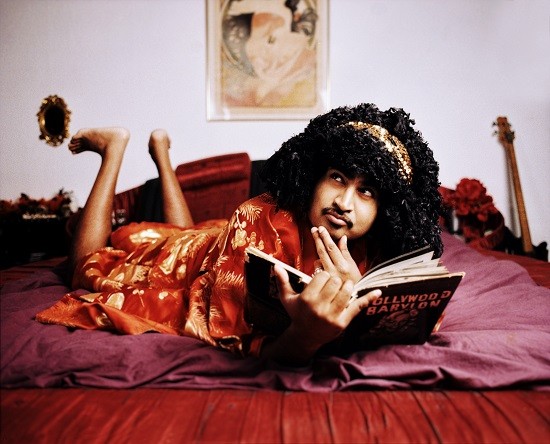 King Khan, rock & roll's spiritual leader by way of Montreal, is returning to Off Broadway with psychedelic soul outfit the Shrines on Saturday, June 15, to promote the group's latest, Idle No More. The album takes its name from a 2012 Native American movement to unite tribes for the betterment of their people and the environment. Khan's interest in the campaign is personal.

"My heart really goes out to indigenous people," he says. "[Growing up] in Montreal, when my father used to kick me out of the house I would seek refuge at my Mohawk friend's house on the reservation. One of my best friends, who recently passed away, was another Mohawk on the reservation. It's really horrible what has happened and keeps happening to the indigenous people. I hope that things change."

Although Khan is best known for his wild stage shows and gleefully irreverent songwriting, this latest effort contains plenty of introspective moments as well. The album's closer, "Of Madness I Dream," seems drawn from an especially deep well. "I read this line by Keith Richards once where he said that he didn't really write songs, but he received them," Khan explains. "I think that -- especially in that song, when I was trying to figure out vocals for it -- it was almost like I got kind of dizzy, and this thing just poured out of me. I feel like I received something from another place. That song especially sums up what's wrong with the world, and how sometimes the simplest things can describe a complicated problem."

The inclusion of socially conscious messages in what might otherwise be thought of as party music follows the tradition of one of his heroes, soul singer the Mighty Hannibal, who Khan says could "balance making fun music for dancing and freaking out while also making these really deep songs to inform the public to stay away from drugs, or to stay away from the American government."

Social justice is a theme in another of Khan's projects -- a soundtrack to director Prichard Smith's The Invaders, a documentary about the social work of the Black Panthers in Memphis. Khan says it will feature original compositions and music "picked from the spectrum of rhythm & blues and free jazz and, basically, great black-power music."

"For me, a lot of inspiration comes from the music of the civil rights movement. It's gonna change the perception of a lot of things, this documentary," Khan explains. "It finally gives justice to all of the people who were blamed for all of the violence that weren't responsible for it. It also shows a side of Martin Luther King that was hidden for a long time -- when he asked the militants to work with him for the Poor People's Campaign. I'm really honored to be a part of this film."

Khan will be in St. Louis twice this year, reappearing with the King Khan & BBQ Show and the Black Lips on September 15 at the Ready Room. This lineup is especially exciting for his fans; it suggests the possibility of a performance by the Almighty Defenders, the gospel-punk supergroup composed of both bands.

That tour precedes the release of the King Khan & BBQ Show's newest album, which will be out early next year on In the Red Records. "I think it's one of the best records we've ever done," Khan says. "We're changing our name. We've been called King Khan & BBQ Show for a long time, and, to be honest, people always get it wrong. People don't understand that Mark Sultan is half the band. Mark wasn't getting the proper justice for being his own entity and a great singer and songwriter. We want to be called the Bad News Boys."

King Khan considers Mark Sultan to be family, and, like most families, the two have had their share of troubles, including a temporary breakup. Shortly before the split in 2009, they were detained by the law on their way to a show in St. Louis which they infamously were forced to cancel.

As Khan explains, "The only reason we got in trouble was such a stupid formality. I mean, yes, you're not supposed to carry psychedelic mushrooms around there. It's just a rule of thumb that I stupidly did not adhere to. But I've never been scared in America -- thank the gods that nothing bad has happened to us there. I think that, in a certain way, if you follow the right path, you're protected. You know, a lot of people might not believe that, but if your intentions are good, then there is some kind of protection out there."

"Sometimes, of course, the storm comes and destroys certain things," he says with a pause. "But whatever doesn't kill you makes you stronger."