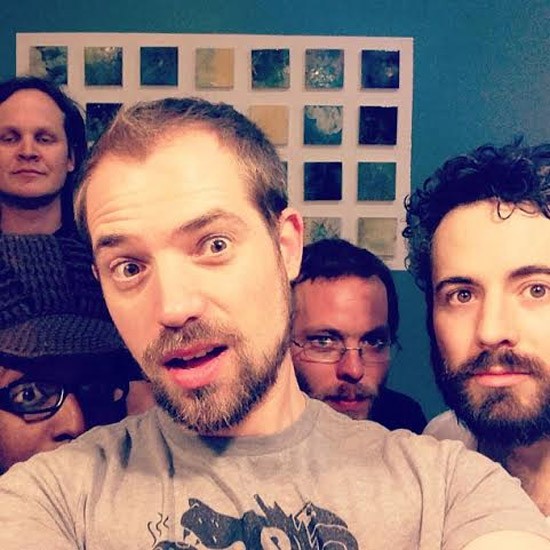 Whew! Voting for nominees in the 2014 RFT Music Awards closed over the weekend, and we'll announce the winners in our special shindig tonight at Atomic Cowboy! In general, RFT Music Awards nominees have been pretty sweet in the way they've campaigned for votes. Local musical acts posted adorable band photos to Facebook and said "Please" when asking Twitter followers to vote via text. We're in St. Louis, after all -- we have good manners.

But that all changed once Humdrum was nominated for a 2014 RFT Music Award in the "indie rock" category. Willing to do anything for a win, Humdrum launched a hilarious video campaign with the political firepower of The West Wing and a fierce intent to destroy the band's opponents -- Aquitaine, Bear Hive, Pretty Little Empire and Sleepy Kitty. So as not to play favorites, we waited until voting closed to report about this, but trust that it is awesome.

"The original inspiration for the smear campaign was really Sleepy Kitty. They are good friends of ours, and they always win the award," says Dan Meehan, vocals/guitar in Humdrum. "But I really wanted to try and give Humdrum a legitimate shot at dethroning them, so I thought if I could get our name in front of their fans in a whimsical way, maybe I could persuade a few of them to vote for us.

"Once that one was complete, it only seemed logical to try and steal the other bands' fans as well," Meehan continues. "We also wanted to make sure our family and friends actually voted for us. People love videos, and thus the campaign was born."

The politically savvy videos, which took two to four hours to put together and incorporated a lot of research on Humdrum's opponents, began trickling out on May 15, with Humdrum first targeting Sleepy Kitty. Imagery in the video suggests that Sleepy Kitty is responsible for terrorism, tornadoes and puppy injuries:

Humdrum next brought Pretty Little Empire's activities to light, accusing the band of threatening democracy and perhaps comparing singer/guitarist Justin Johnson to Darth Vader. Does Loufest know about this?

But Humdrum's thirst for blood was far from over.

Next, Humdrum accused Aquitaine of forfeiting its "indie" categorization because of suspicious corporate sponsorship. We always wondered if Walmart and the devil had favorite St. Louis bands:

But that wasn't all! Though not nominated, Kid Scientist was enough of a write-in threat to warrant an attack from Humdrum:

"We were mostly looking for two things," Meehan says. "One, we wanted a lot of people to watch the videos and think they were funny. This seems to have worked -- we've gotten more views and shares of these than any other stuff we've posted. And two, we were hoping that the other acts would make their own retaliation attacks against us, which also worked a couple times."

Kid Scientist was one of the bands that stood up to Humdrum's assaults, happy to play dirty and return the volley.

"When a bee stings you, you don't just take it," says Joe Taylor, who does piano, synth and vocals for Kid Scientist. "You grab it, stomp on it multiple times, then rub its unique pheromones all over your body to sneak into its hive undetected and steal its treasure."

In its attack, Kid Scientist reveals that Humdrum has a piss-poor practice space that doesn't even offer catering service:

"We smeared them on our breakfast toasts," Taylor says. "It was hilarious and delicious."

This was exactly what Meehan had envisioned.

"We were hoping it would devolve into an epic battle of videos, Photoshopped images and posters," Meehan says. "All of the bands are our friends, so we felt no shame in spinning a web of lies about them."

The video war has left a lot of dead bodies around St. Louis, but has it been enough? And will it inspire an even dirtier battle during next year's voting? Find out during tonight's RFT Music Awards ceremony and party at Atomic Cowboy. The fun runs 7 to 10 p.m. with live entertainment, and the event is free and open to the public. Get the scoop here.