Out Every Night: The Best Concerts in St. Louis From June 9 to 15 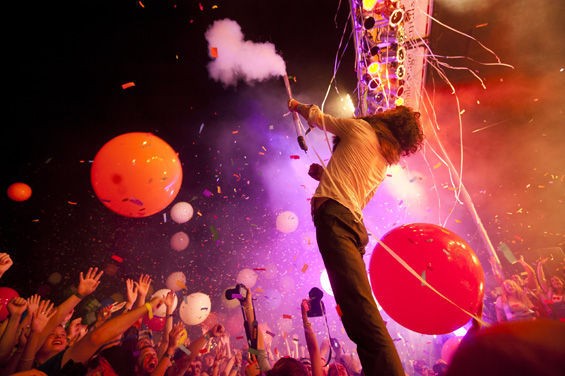 This week in music features lots of exciting acts from the Flaming Lips to King Khan and the Shrines. Additionally, the Luminary features its first official show with Sylvan Esso. the Pat Sajak Assassins release its new CD and the Lion's Daughter puts out a split in the name of charity. Read on for info on these shows and more in this week's show recommendations.

Soulard Blues Band Monday, June 9, 9 p.m. @ Broadway Oyster Bar - $6 By Roy Kasten From the 2014 RFT Music Awards: One day, dear reader, the Soulard Blues Band will be no more. It's just a fact. And one day you'll wonder why, despite all the opportunities every other day of the week, you never saw this St. Louis institution in its prime -- and no, the band's prime ain't over. If somehow you've never danced your ass off when Art Dwyer lays down a bass line as smooth as crushed velvet, or when Marty Abdullah swings his phrasing on "Kansas City Blues" or "Dust My Broom," or when Tom Maloney plays a solo that would make his mentor (the late, great Benny Smith) smile, well you really should. Don't take this band for granted. Pay your respects soon; they've been earned.

The Flaming Lips Tuesday, June 10, 8 p.m. @ The Pageant - $37.50-$45 By Liz Miller From this 2012 concert review: Perched at the front of the stage -- on the Lips' special extended platform -- below a spinning disco ball and laser show, Coyne slays confetti-filled balloons with his guitar, while others float among the audience, occasionally bursting to offer a decidedly more festive shower. A giant costumed catfish and star appear on stage, as do ladies dressed in Dorothy dresses, and in the audience fans play their parts with bunny and banana costumes, roaming the crowd.... Wielding a smoke-blowing megaphone, Coyne saturates the stage in a hazy film before performing another fan favorite, "The Yeah Yeah Yeah Song." Pull out your Flaming Lips Bingo Card, because the end of this song sees Coyne enter that signature hamster ball bubble, rolling around the audience, at times standing, at others on his knees, bandied about by a gleeful LouFest.

Self Help Tuesday, June 10, 8 p.m. w/ Rhythm of Cruelty, Trauma Harness @ Melt - $7 By Jenn DeRose From the 2014 RFT Music Awards: Self Help, the most recent collaboration from Ashley Hohman and Ben Smith following Doom Town's recent demise, combines elements of classic LA punk and the Brian Eno-produced post-punk of No New York in its latest cassette release, CS 2014 on Don't Touch My Records. Hohman, who has previously performed in the Vultures, Doom Town and Tone Rodent, stretches out on the tape, alternately channeling the trills of Poly Styrene and Exene Cervenca. Smith, Chris Eck (of Shaved Women fame) and Leo Jalipa create a danceable space for Hohman's moody vocals, which are more powerful and confident than her previous projects. The result is occasionally hair-raising and thoroughly satisfying.

Sylvan Esso w/ Thelonius Kryptonite Wednesday, June 11, 8 p.m. @ The Luminary - $10/$12 By Christian Schaeffer If you were lucky enough to catch Mountain Man on one of its trips through St. Louis, you were likely transfixed by the a cappella Appalachian folk sounds emanating from the group's three female singers. That austerity has been given an electro twist with the new project Sylvan Esso, which combines Mountain Man's Amelia Meath with producer Nick Sanborn. What was meant as a one-off collaboration became a full-length, self-titled LP. Meath's multi-tracked vocals show traces of her other project, but Sanborn cloaks her vocals in glitchy percussion and gritty analog synth oscillations. Sylvan Esso's performance marks the inaugural concert in the Luminary's new space on Cherokee Street, and local hip-hop polymath Thelonious Kryptonite will open the show.

The Detroit Cobras Thursday, June 12, 9 p.m. w/ Pujol @ The Demo - $12-$14 By Christian Schaeffer When the Detroit Cobras performed at the Duck Room a few years ago for the 2010 incarnation of Twangfest, the Motor City band put on a master-class of garaged-up soul and slinky basement funk. Led by the unflappable Rachel Nagy, the all-covers act worked through songs by Garnett Mims, Irma Thomas and the Shirelles with an effervescent cool that nonetheless made the crowd work up a sweat. The band hasn't released an album since 2007 Tied & True, but seeing as how 2014 marks its twentieth anniversary, you won't hear many complaints from the crowd. An opening set by Pujol, whose new LP Kludge is overflowing with hooks and perpetually punk-damaged joyful noise, makes this an airtight double bill.

The Pat Sajak Assassins CD Release Friday, June 13, 9 p.m. w/ Tennis Lesson, The Leads @ The Heavy Anchor - $5 By Allison Babka From the 2014 RFT Music Awards: Remember how Pink Floyd, Jethro Tull and Yes were widely credited with cementing the legitimacy of the progressive rock genre in the late '60s and early '70s? How they heralded an evolution for music? Well, we might end up saying the same thing about the Pat Sajak Assassins decades from now. As a band that relies more upon instrumental layering instead of front-and-center vocals, PSA already shifts from the norm. But it's more than that -- the band also stacks synth, bass and percussion in ways that jolt listeners into truly hearing each beep and boop and set a new standard for music composition. Played in any order, the songs become an opera fit for R2-D2, and we can't wait to welcome our new robot overlords.

Breakmouth Annie Friday, June 13, 9 p.m. w/ The Cuban Missiles, The Haddonfields, Horror Section @ Schlafly Tap Room - free By Michael Dauphin From the 2014 RFT Music Awards: After gigging around for the last couple years, Breakmouth Annie just recently had its official coming-out party via its first recording, a split seven-inch with the Winchester (Throwing Things Records). The tunes are fast, gritty and heavy, and they drum up the spirit of genuine pre-Blink-182 pop-punk. Singer Bob Monroe's earnest, barbed-wire howl cuts through the thick wall of unmistakable Les Paul distortion, making these songs stick in you like a fishing hook -- and it's easier to just leave them in your head and flounder around than to try to force them out.

The Lion's Daughter/Nights Like These Split 7" Release w/ Everything Went Black, Anodes, Hell Night Saturday, June 14, 9 p.m. @ The Ready Room - $5 By Daniel Hill Memphis metallic hardcore outfit Nights Like These to release a split seven-inch serving one of the noblest of causes: All proceeds will go to benefit stray dog and cat organizations in both bands' hometowns. And when they say "all" they mean it -- all money from sales of the record at the door for this show will be donated. Even the recording work and art was done pro bono, to maximize the potential donation. And if that doesn't pique your interest, perhaps the fact that this is Nights Like These's first recording in eight years will sell you. TLD's press release sums up the mission statement of this project in appropriately metal fashion. Says vocalist Rick Giordano, "This record gives us an opportunity to release a new song, put out a seven-inch with a great band of old friends and most importantly contribute funds to an organization that saves the lives of awesome creatures who, in our opinion, are far superior to humans."

World Party Saturday, June 14, 8 p.m. w/ Gabriel Kelley @ Off Broadway - $20-$23 By Roy Kasten The nice guys of rock music don't finish first or last by definition, and often they don't finish at all. Such is the case with Karl Wallinger, the songwriter behind UK alterna-pop band World Party (and one-time member of the legendary Waterboys), who suffered a life-threatening aneurysm in 2001, just as his band was celebrating the tenth anniversary of its best album Goodbye Jumbo. Unable to speak, let alone perform, Wallinger needed five years to recuperate, and since then his recorded output has been fitful at best. He remains, however, one of the great Beatlemaniacs, a pop auteur who loves pure fun as much as progressive politics, and, on a good night, a performer of the first rank. The music of opener Gabriel Kelley couldn't be more different from the headliner; no matter, his rugged, blues-powered folk more than merits your patronage.

King Khan and the Shrines Sunday, June 15, 9 p.m. w/ Red Mass, The Sueves @ Off Broadway - $15-$18 By Keegan Hamilton From this 2010 show review: Make no mistake, Khan was the star of this show. Others have compared him to a cross between James Brown and Iggy Pop. That's a fairly accurate approximation, but really he's an entity all his own. He unleashes the same "ughs!" "owws!" and "huhs!" as the Godfather of Soul and has the same exhibitionist impulses as Iggy, but he also has the nonchalant vibe of a lounge singer who is utterly confident in both his cool and his shtick. Several times he just stepped back from the mic, cocked his head to the side to see what was happening (on two occasions women from the audience had climbed on stage to dance), and smirked, as if to say "goddamn, this is fun!"