How Not to Interact With Female Musicians 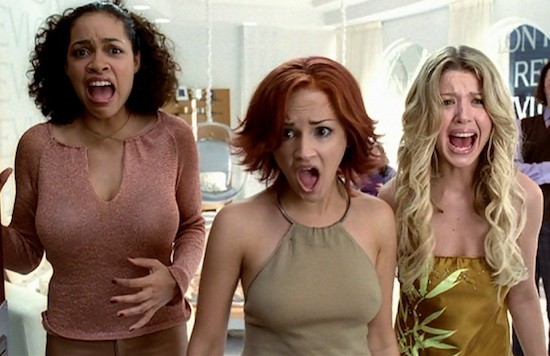 [Ed note: Robin Edwards is a frequent contributor to our sister paper in Denver, Westword. She has played in several bands. Her solo project is called Lisa Prank.]

Sometimes I wonder what it was like before bands had Internet presences. Did creepy dudes just send their vaguely threatening messages to female musicians through the mail with locks of their hair? I've been thinking that might not have been out of the question ever since I received a Facebook message from a guy who went to one of my band's shows. He asked if he could be my stalker and added a goofy emoticon and a few "jk"s. I assume that was a way to hedge so that when I responded, he could pull the old, "I was joking! Don't be crazy!" card. Unfortunately, violence against women, which can certainly start with stalking, is a very real concern in our society, so it's not something you should joke about, especially with a complete stranger over the Internet.

I thought that threatening someone's personal safety was a commonsense no-no, but apparently that's not the case. So here's a handy guide with ways not to interact with female musicians. This is good advice for dealing with any human beings, actually, but it seems that these things happen at an alarmingly high rate to those of us who have the audacity to get onstage with instruments but no penis. 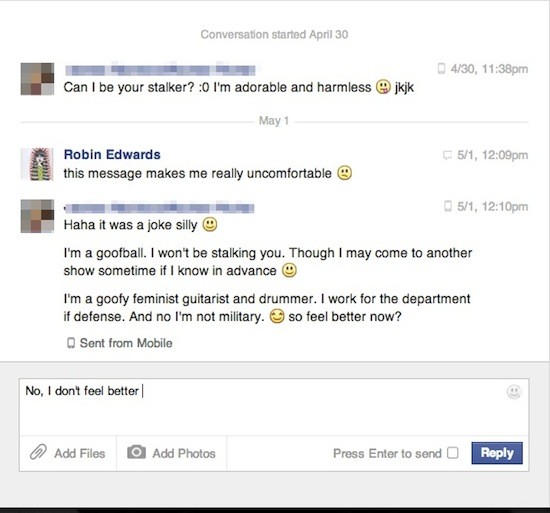 And no, your good intent does not give you a pass. Just because you're a self-proclaimed feminist, you have a Kathleen Hanna tattoo or you were "just joking" does not mean that your actions don't have harmful consequences. Prove you are a good guy by accepting criticism, apologizing and stepping back if you've said something offensive or creepy.

Don't offer music lessons This has happened to a surprising number of women I know. Here's how it usually goes: A dude comes up after a performance and says, "You know, I could give you [insert instrument here] lessons if you want."

In the words of Stephanie Tanner: How rude. Also in this category is giving pointers or advice on how your guitar should sound, as well as offering suggestions for improvement. If you want to help out, buy some merch.

Don't ask "Do you write your own songs?" No, her boyfriend wrote them. See: Stephanie Tanner's catchphrase. Don't say, "You surprised me. You're actually good!" I think this is meant to be a compliment, but it isn't a good one. You seem to be saying, "At first I saw your female anatomy and thought, 'Someone with a vagina surely could not create music that I would like or relate to.' But, hey, you are a cut above the rest of your sex! Thank you for appealing to me!" Get out of here.

Don't compliment her appearance instead of her music Playing in a band is not the same as putting up an OkCupid profile. Playing music is not a desperate cry for dates. If you're thinking, "She looked so sexy up there" after she just played a killer guitar solo, keep that thought to yourself.

Be cool. Buy merch. Talk about the music. Interact like a human. A good rule of thumb is to ask yourself, "Would I say this to a dude in a band?" If the answer is no, don't say it.

Most of the people I interact with are sweet and respectful and wonderful. It's the stalker outliers who put women on edge when they're interacting with dudes at shows. In the words of Abraham Lincoln to Bill and Ted: Be excellent to each other and party on, dudes.

Tell Robin Edwards she's pretty good for a girl over on Twitter: @robinrobine