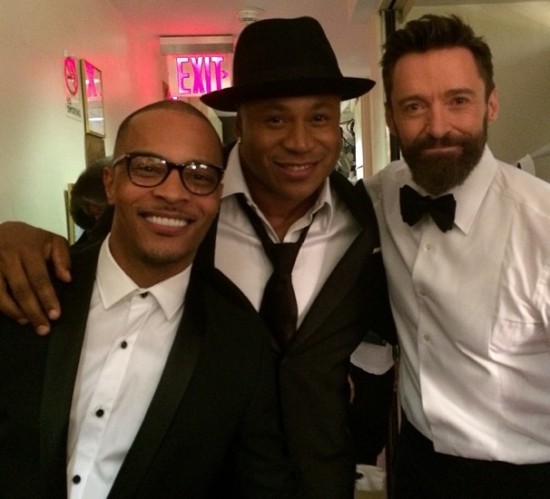 For some of us, watching the Tony Awards is like seeing our skewed, preferred version of reality come to life. Dancers prance about in peacock feathers and sequins, people sing spontaneous lyrics about running to the restroom and almost everybody gets to tap down a spinning staircase that's been lit up brighter than a California forest fire. We're not gonna lie: This is exactly how we want to go through life.

The #TonyAwards are my last remaining hope that I can one day live in a world where people break into song.

Us, too, Jared. But even in our happy place of perpetual jazz hands, weird shit happens, and that's what we love about the marriage between car-crash award shows and live musical theater. Below, check out our favorite moments from Sunday night's broadcast of the Tony Awards, including an ass-shaking, gender-bending performance from the former Doogie Howser, M.D.

During the broadcast, Tonys host and X-Men: Days of Future Past star Hugh Jackman mentioned that he had been in The Music Man in high school. No big, right? After all, nearly every theatre kid has had a hand in this production as part of a musical baptism. But not everyone tries to rap "Rock Island," not everyone is joined by T.I. and LL Cool J for a performance, and not everyone has their production arranged by Questlove. Afterwards, Jackman claimed that LL gave him the "rap name" of "Biggie Tapshoes."

.@Alancumming can do no wrong. And yes, I'm including Josie and the Pussycats. #TonyAwards

More than a few nerds realized that the Tonys stage featured several comic book characters throughout the night:

WOLVERINE AND KURT WAGNER MUSICAL. THINK ABOUT IT. IT WOULD BE AMAZING, DON'T EVEN LIE. #TonyAwards #XMen

The Tonys just piled on more evidence for Neil Patrick Harris' world domination -- something we'd gladly support. The current star of Hedwig and the Angry Inch was introduced by RuPaul, who looked dashing in a satin magenta tux jacket:

But of course the main attraction was our former Doogie, who won the Tony for best actor in a musical. Tarted up in mega makeup, a long blonde wig and a tiny dress, Harris happily lost himself in his role as a transgender singer, leaping into the audience to air-hump the stars ("It's like a car wash," he told audience members), give Samuel L. Jackson's glasses a little tongue action and shimmy in Kevin Bacon's lap.

And then NPH finished up his performance with a quick kiss to his husband David Burtka, who was in the audience. Later, when he accepted his best actor award, Harris said the Tonys experience was "crazypants."

Sting composed his first Broadway musical in The Last Ship, which debuts this summer, so of course he previewed the event on the Tonys with a performance of the title song. We're not going to post it here, because it was unbelievably boring. Instead, we'll share this Vine of Sting clapping like a seal in response to something Hugh Jackman said:

Is it just me, or does Sting clap like one of those toy monkeys? #TonyAwards

I can't take it. Sting claps like Paula Abdul? #TonyAwards

By the way, Harris air-humped Sting:

Not everything was ridiculous, though. When it came to "wow" factor, Gladys Knight, Patti LaBelle and Fantasia Barrino opened the show with a rousing medley from After Midnight, Disney proved its dedication to musical theatre with "Friend Like Me" from Aladdin and the legendary Carole King sang with Jessie Mueller, who portrays the singer-songwriter in Beautiful: the Carole King Musical.