Going to the Source With Legendary Bassist Preston Hubbard 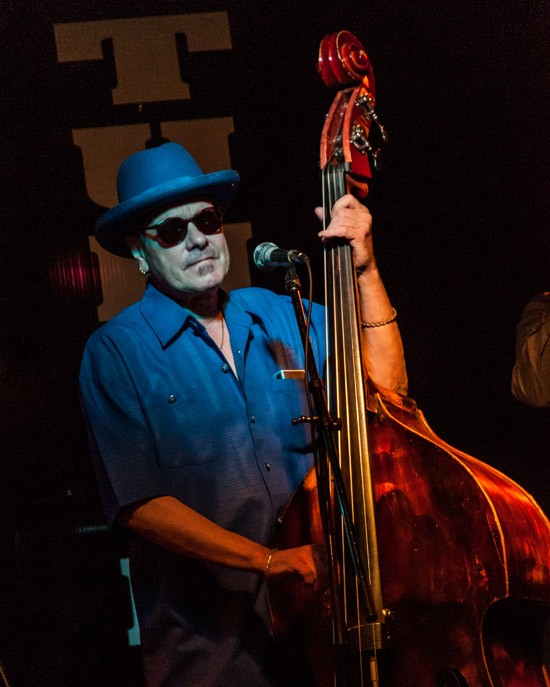 When considering the life and music of Preston Hubbard, the tales sometime seem too tall to be believed. The back-story threatens to overwhelm the front-story, or maybe it's impossible to say which is which. Born in Providence, Rhode Island in 1953, Hubbard became one of the hottest bass players on the second-generation rock & roll and blues scenes, working with Room Full of Blues and the Fabulous Thunderbirds, recording with and backing up everyone from Bonnie Raitt to Big Joe Turner to Snooky Pryor to Duke Robillard to Lou Ann Barton to Nick Curran. Hell, the man even played on Ministry's Filth Pig album.

He was also, through most of those years, from the '70s to the '90s, a straight-up junkie and, in time, a prolific dealer. When he disappeared from the face of the Austin, Texas music scene in the late '90s, everyone, including those who knew him best, assumed he was dead, either from the dope or a deal gone bad. And he probably should have been. When he wound up in the Texas Department of Corrections system, it was serious chain gang shit; his time lasted some 22 months before he was released. Eventually he got clean and left Austin for St. Louis, which has been his home for nearly a decade.

In St. Louis, Hubbard has continued to play bass, working with scores of blues bands and old friends -- James Harman, Nathan James, Dave Herrero -- who pass through town, and has gigged pretty regularly with local bluesman Big Mike Aguirre and groups like Los Carnales. If you're a blues fan in St. Louis, you've probably seen Prez play at BB's or in Soulard or at the Blues City Deli. The man still very much has it: cool and in the pocket with a big smile, his signature bandana and Homburg hat, and with a feel for the upright bass that's tough to pinpoint, even tougher to learn. You have to "go back to the source," in Hubbard's words. And in his own way, Prez is one of the true sources of the groove.

This past April, Hubbard was diagnosed with diabetes and neuropathy, and it just about killed him. His health is improving, but as with so many musicians he had no health insurance at the time he was stricken, and the money from the gigs and the records, some of which sold millions of copies, is long gone.

This weekend, friends, fans and fellow musicians will be holding two benefits for Hubbard: "BCD Hearts Prez" on Saturday, June 7 at the Blues City Deli from noon-4 p.m. and "Props For Prez" on Sunday, June 8 at BB's Jazz Blues and Soups from noon-8 p.m. Along with auctions, raffles and performances by Felix Reyes, Funky Butt Brass Band, the Soulard Blues Band, and many others, Sunday's benefit at BB's will feature an appearance by Kim Wilson, singer and harp player for the Fabulous Thunderbirds, to close out the night. Prez plans to play with him.

I caught up with Hubbard on the phone to let him scratch the surface of his life in rock & roll and the blues.

Roy Kasten: Let's go back, as far back as you can remember. Tell me when you first fell in love with playing bass.

Preston Hubbard: When I was fourteen I had a little garage band, and at that time I started doing paid gigs with a couple of bands. I was in a couple of rock bands, and then when I was seventeen I heard Muddy Waters and Willie Dixon, and that turned my world upside down. That's when I got serious and started playing upright, too. Since then I've been lucky to play with a lot of great players and a lot of the greats who are long dead now. That's all I've done, except for the years slinging dope. The rest of the time I've just been a bass player.

There were several. Willie [Dixon] of course, and most of the blues bass players, the originals. But the big idols of mine were the jazz guys, Ray Brown and Oscar Pettiford. I can't name all of them. I tried to emulate them. If you do that, listen to the originals, and try to copy them and figure out what they're doing, then you can end up with your own style. It's all about the originals, going back to the source.

How did joining Room Full of Blues change what you were doing on the instrument?

Well, yeah, we were all friends, but I had a band before that with Scott Hamilton, the jazz tenor sax player; we came out of high school together. We had a band called the Blue Flames. We were friends with people in that great Providence scene when we were growing up. Room Full of Blues wanted to hire me, but they didn't want to step on any toes. One of their girlfriends told me about it, so I asked, and they were just a fantastic band.

When people think of the Fabulous Thunderbirds, they think of one of the most successful, true rock & roll bands of the time. But the band was in deep debt by the time you recorded "Tuff Enuff" with Dave Edmunds in London.

When I joined, they were heavily in debt. I didn't care. I wanted to play with those guys, with Jimmie [Vaughan]. We clawed our way out. Then "Tuff Enuff" happened and nobody expected that. We figured our fan base would buy it, maybe 50,000 copies, but then it just went through the roof. But they didn't have a label, they'd just hired a new manager. But I loved them from day one and believed in them. We just went out and hit it hard. We paid for everything ourselves. We paid for the packaging, the artwork, the video. Then the manager shopped it around and Epic picked it up. It took a couple of years. Everybody thinks I jumped into this golden opportunity, but it took a couple of years of working hard and making it happen.

When "Tuff Enuff" took off and the band's profile got bigger and bigger, how did you manage to keep your drug habit secret? Did people know or did they just turn a blind eye?

Some people knew, for others it was none of their business. We were all doing coke. I was the only junkie. Those other guys didn't mess with dope. That was the time when backstage everybody would have a bag of coke. It was the last days of sex, drugs and rock & roll, before everybody cleaned up or died. I kept it from certain people. The band knew and didn't approve. My wife at the time was a junkie too. It was what it was. It was a different life.

The first album the T-Birds made without Jimmie Vaughan was Walk That Walk, Talk That Talk in 1991, which I know is a special record for you, and it's really underrated. It's probably the T-Birds' most soulful release.

I agree. I tell people that arguably it's our best record. But at that time we lost our whole Epic crew. Grunge was the big thing, labels were signing anybody out of Seattle. So I thank you for that; it's a great record.

One of the things about that record, and about every T-Birds album you could say, is that the material is really strong, whether originals or covers. How much input did you have on the band's material?

Everything with the T-Birds was a democracy. Nothing was done business wise or song selection -- we were all always involved. Kim [Wilson] was the primary songwriter; he wrote some of the T-Birds classics, even on the early records, great stuff. Sometimes all four of us would get together and write songs. On others, Kim would bring them in and we'd tighten them up. And that was with business too. We'd all have to agree and sign the papers. Kim and Jimmie were the stars, clearly, but it was always the four of us.

When you were cut loose from the T-Birds, did you try to start working with other bands, or was it pretty much straight into the dope world?

I went straight into slinging. I had already been a junkie for years as a consumer, but I went straight into slinging and wound up supplying half of Austin for six years. It caught up with me. It always does. I remember it was a two-week stand in Reno, and I just walked. It was all due to the dope. Those guys knew it. Even a little while ago Kim thanked me for not dragging my drama into the band.

Even as that world had become your life, did you ever think, OK, this is good, the drugs feel good, but it isn't as good as making music?

Sometimes. But when you're in that life, you don't think about things a lot. Insane behavior seems normal. When I think back now on some of the shit I did when I was in that life, I can't believe it -- besides the fact that I should have been dead half a dozen times.

Everything seems normal. Everybody had abscesses, and I lost a lot of friends from ODs or abscess. You look at it as part of the life. It's hard to explain unless you're there. I always say that a lot of us got out alive, but I lost a lot of friends, a lot of customers, from dope-related stuff. A lot of us made it out. This is my first health issue -- I had abscesses and mild stuff like that -- but I hadn't been to a hospital since I was twelve years old! Then I was in Barnes on death's door. They were pumping me full of stuff, blood transfusions. But I've been lucky. I blew out my whole circulatory system. It's all scars, I don't have many veins left. I survived it all. It's a miracle.