Curtis Brewer of local folk/pop group Yankee Racers created more than just some visual stimuli to accompany "For Ever," a song from the group's upcoming American Music album -- he created a new family. Well, I suppose I should say he proposed the creation of a new family -- it took a "yes" from Warsaw printmaker Ewa Budka to seal the deal.

Brewer and Budka met by chance though the latter's 2014 residency at St. Louis' Paul Artspace. (Budka is a Polish national, a 2013 graduate of the Academy of Fine Arts in Warsaw and a Rector's Honour recipient.)

The video was filmed at Off Broadway, and it opens with Brewer alone onstage with an acoustic guitar, singing the opening lines: "I still believe those first words that came to my mind / You are the first woman that I can look straight in the eyes." Brewer is soon accompanied by cello and banjo as the song moves into its chorus: "Lay down; this is our moment / Just you and me and forever / I'm yours; you're mine, together / Nothing to do, nothing to change / Stay drunk on dreams in infinite ways / We can live like this forever."

As the song progresses Brewer is joined by a standup bass and piano as well, swelling to a quintet as it moves into a driving bridge/outro. Proceedings take an extra personal turn at the 5:30 mark, as Brewer looks directly into the camera, presents a ring, and proposes to Budka in her native Polish. The entire affair is intimate and moving, among the most heart-on-your-sleeve moments ever captured on film.

Watch the video below, read our review of Yankee Racers' newest album on the next page and head to the Schlafly Tap Room this Friday and join in the celebration: She said yes. 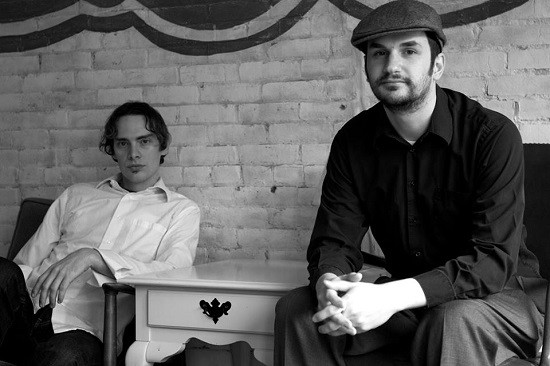 When Yankee Racers made its debut with 2012's Duologue, it felt like more of an amorphously defined "project" than a straight-ahead band. That was an intentional dodge, it seemed. The LP was written and composed by Curt Brewer and Nathan Jatcko but performed with the help of a coterie of south St. Louis' best musical talents -- members of So Many Dynamos, Old Lights, Bruiser Queen and the Blind Eyes contributed instrumentation and lead vocals -- so much so that Brewer, the band's ostensible frontman, was rarely heard on the disc. Couple that approach with Duologue's war-torn/post-apocalyptic arc and it was a safe bet that if and when Yankee Racers released more music, it would be fundamentally different than what came before.

Sure enough, for American Music Brewer and Jatcko strip back both the music and the overall approach, and while the album's name serves as a slight-of-hand on the title track, it also defines the folk- and jazz-flecked approach to these acoustic songs.

Brewer, perhaps best known as the fiery lead guitarist for the blues/noir bar band Kentucky Knife Fight (to which Jatcko often contributes), shows his deft fingerpicking and dulcet banjo plucks here. It's no judgment to simply say that this album couldn't be more different than the members' other outfit, both in tone and instrumentation.

On "What It Takes," the music takes the form of a circular folk ballad, laying a simple melodic bed for Brewer's searching lyrics and capable, if somewhat strained, vocals. He sticks to the upper end of his tenor voice, and his earnestness covers for a lack of expressiveness. The twinkling waltz of "Stealing Romance" (a Milk Carton Kids cover) borrows some of that duo's style with Mallory Nezam's harmony vocals and Brewer's pinpoint guitar solo.

Jatcko's presence is more muted throughout, save for some ragtime movements sprinkled here and there, and a driving electric piano figure on "Moonlight Mouth," presented in two marginally different forms. All in all, it fits a mostly quiet, low-stakes album that is content to strum where its predecessor stomped.