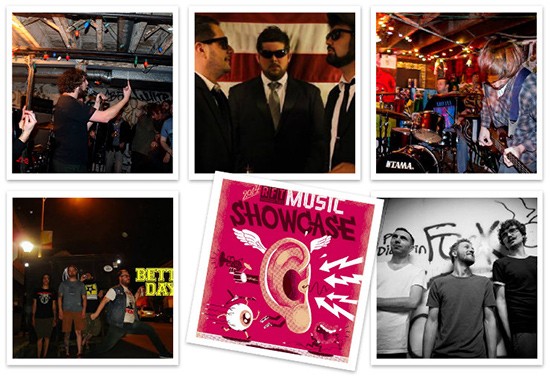 Say what you want about this group -- some of the goofiest, most fun-loving, beer-swilling punks in St. Louis -- but don't you dare question its patriotism. This is the type of punk rock for anyone aching to get in a good round of hungover wiffleball, or awkwardly make out in the back of a pickup truck. Over the past four years of shows and music videos and hilariously catchy punk rock tunes, the band has proven time and time again that the only thing they take seriously is an unrelenting love for America and everything that makes up a good barbecue. -Jimmy Eberle

After gigging around for the last couple years, Breakmouth Annie just recently had its official coming-out party via its first recording, a split seven-inch with the Winchester (Throwing Things Records). The tunes are fast, gritty and heavy, and they drum up the spirit of genuine pre-Blink-182 pop-punk. Singer Bob Monroe's earnest, barbed-wire howl cuts through the thick wall of unmistakable Les Paul distortion, making these songs stick in you like a fishing hook -- and it's easier to just leave them in your head and flounder around than to try to force them out. -Michael Dauphin

Don't go into a Better Days show thinking that the punk foursome took its name from a second-rate Bruce Springsteen song. The better days that this band yearns for seem to be the ones when melodic, charging hardcore was the punk flavor du jour; Youth of Today, 7 Seconds and Dag Nasty are clearly the band's most overt influences. There's much more than throwback-punk at work here, though, and 2012's Good Luck Tonight EP makes that clear with Kevin Tomorrow's bouncing bass lines and Chris Vela's impassioned vocals suggesting that the better days in question are the ones right in front of us. Look for the band's Nope seven-inch to drop this summer c/o Encapsulated Records. -Christian Schaeffer

Maximum Effort is a self-described "public awareness group," a collection of concerned citizens committed to helping their fellow earthlings understand the dangers that lurk behind the Shadow Government and the truth about the aliens among us. Coast to Coast, influence is woven into every detail of the aesthetic; even the band's cryptic logo could easily be imagined as negative space in a corn field -- a postcard left by visitors from another world. It would be a mistake to dismiss Maximum Effort's members as a bunch of obsessive-paranoid wackos, though. Guitarist Adam Hoskins and drummer Tom Valli shred their respective instruments harder than the government shredded memos about the Roswell Incident, and frontman Nick Zengerling is brilliant with a microphone -- his hilarious onstage banter and fervent delivery make the ravings of Jello Biafra seem tepid and meek. -Jenn DeRose

Trauma Harness may just be one of St. Louis' best-kept secrets. For years now the angular trio of Jenkins, Peterson and Birkner has produced an infectious brand of downer post-punk that would send any fan of the Fall or Wire running for the merch table. Through excellent musicianship and a crystallization of its power-pop and art-punk influences, Trauma Harness has proven to be one of the most interesting (if not overlooked) acts in the city. Whether ripping a virulent set of original songs or entering uncharted territory with an all-synth set, the band continue to set a new standard for creativity and sonic communion. -Josh Levi