Rockabration, hosted by local musician Jason Robinson, has become a Memorial Day weekend tradition at Off Broadway (3509 Lemp Avenue). This Sunday, May 25, marks the fourth year Robinson has put together the event: a day of local music, food trucks, cold beers, roller girls, live art and more. He initially came up with the idea while fronting the now-defunct band the Orbz. These days, his rock project Shark Dad holds down the stage with a selection of other artists.

Shark Dad got its start in September 2013, the result of a friend telling Robinson he had six months to form a band and play an already booked show. Only two months later, his new band band already established weekly practices, some songs and its name.

"Like most things, a drunken dare turned into 'Let's do it,'" says Robinson, the vocalist and primary songwriter of the band. "The name still makes me laugh sometimes, like really? This is the name we went with, huh? This is the one."

The whimsical premise sets the tone for the band's fun-loving basis, with songs that reflect on nostalgic topics and just about anything else Robinson can think of. Song titles range from "Burlesque Taco Truck" and "Turds of Mercy" to "Kitty Cat Dolphin" -- a 32-second-long ditty inspired by his kids -- for instance.

"Lyrics come from anywhere. Once I have a little germ of an idea, I use the whole pig, or the whole shark, I guess. I don't know if you like that metaphor," he says. "I think having a sense of humor is one of the important things you can do. You connect over humor."

Four out of the five members of the band work together in IT infrastructure, and four out of five are also dads. Once a week, the group convenes to write rollicking rock-and-roll that doesn't take itself too seriously. Raunchy garage elements reign supreme in Shark Dad's sound, but Robinson's personal influences include a fairly varied list of favorite artists including Cheap Trick, Guided by Voices, Ty Segall and Smoking Popes.

Shark Dad releases a brand new digital demo every Friday via Bandcamp, in what what it has dubbed De Basement Tapes, a play on words with the Pixies' song "Debaser." The band has an EP in the works and will release a single called "OK Soda" this summer. Check out De Basement Tapes below.

Singer Jason Robinson filled in the blanks ahead of his event, Rockabration 4, this Sunday. See what he had to see after the jump. 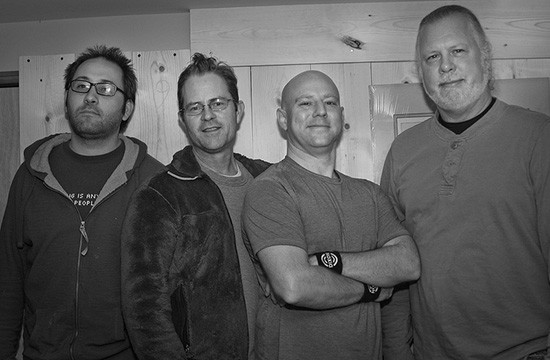 What I like most about St. Louis is... Jason Robinson: There's this real sense of community, it's where I was born and raised, it's cheap to live here, there's tons of venues, we've got awesome little subcultures and they're everywhere, there's crazy good food, it's a cool place to raise kids, and people are just nice and welcoming. It's that whole Midwesterner thing. Two of the other Shark Dad guys (Rick and Shawn) are from Michigan, and they pretty much said the same when they moved here years ago.

I make music because... like a shark, if I don't I'll die? Maybe not that extreme, but after my last band, the Orbz, broke up, I wasn't doing any music writing. I was trying to learn to play guitar and failing at it. So when Shark Dad fell together, we just hit the ground running. We, as a band, make music because it's plain fun to do. If you're not having fun, you're doing it wrong.

My favorite aspect of being in a band is... the brotherhood, that feeling of team unity, coming together without talking -- what my friend Allison calls "that telepathic thing." We get together for practices and it's like I'm kicking it with four awesome friends.

I'm most inspired by... my favorite artists that are just prolific and have a sense of humor -- Guided by Voices, Ween, They Might Be Giants. You can hear that playfulness in each of them. Things that make me laugh. If a phrase or word or sentence can make me truly laugh, then I tend to remember it. One of the best examples is "Kitty Cat Dolphin," and it's a song my 4-year-old boy-girl twins wrote. They came up with the phrase and we wrote it together. And the whole idea just makes me laugh. There's nothing to the song -- it's just the title repeated over and over and over and over. But it still gets me every time. We also, on a friend's urging, wrote a song with the title "Ke$ha's Haunted Vagina," which oddly enough has yet to get me sued. I am watching the mailbox for that cease-and-desist order any day now.

The St. Louis music scene could use... more bands that aren't so serious all the time. You can see that that's changing -- I mean you're starting to see the sense of humor thing now with guys like Tok who are always up to some funny stuff. That video series "Wanna Tok About It" actually makes me really insanely jealous that I didn't think of it first. Now if I put out "Wanna Shark Dad 'Bout It?" everyone's gonna say, "COPYCAT!" And I just saw there's a smear campaign by Humdrum to oust Pretty Little Empire from an RFT Awards slot and it's set up like a political ad. We're dropping the "MUSIC IS SERIOUS" placards and tapping a vein of self-deprecating Midwestern humor.

The best post-show food in St. Louis is... I'm a sucker for greasy-spoon diners. For my money, there's nothing like Uncle Bill's on Kingshighway. You also can't go wrong with Tiffany's, Courtesy Diner or Eat-Rite. It used to be Del Taco, but that ship has sailed.

The most memorable show I've ever played.. was opening for the Pack A.D. at Off Broadway -- just the coolest two-person band from Vancouver that you'll ever meet. Becky and Maya were really great, and they put us at ease because we were the only other band on the bill, I was so afraid of screwing up and it was also Erik's first gig with us. So, Erik got his trial by fire and I got to do my weird thing in front of a big crowd of people. It was madness and so much fun. I mean, they had sharks on their t-shirts! It's like it was meant to be.

Five current artists worth listening to are... Aside from the bands at Rockabration? Let's see: Tok, Middle Class Fashion, Pat Sajak Assassins, Other People, Rulers... I could go on for days, but if it's five, well those are the five I've had in the car lately.