The Shanti in Soulard To Close in November 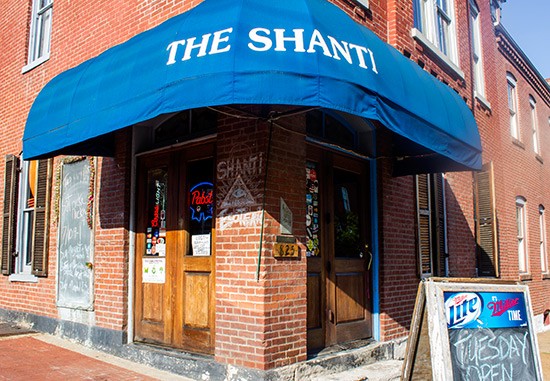 For more than a decade, the Shanti (825 Allen Avenue; 314-241-4772) has hosted cover-free concerts every night of the week at its Deadhead-themed dive bar in Soulard. The end of an era filled with cold beers, jam bands and open-mic nights comes this fall, however. According to owner Teresa Parker, the corner bar will close on November 29.

"We have been blessed with all the musicians that walk through our door. We're a hippie bar, so we've mostly featured jam bands -- a lot of Grateful Dead bands -- but we also have blues and a lot of bluegrass," says Parker, who helped open Molly's in Soulard (816 Geyer Avenue) in the early '90s prior to taking on her own business.

According to Parker, the building that houses the Shanti has been for sale for a long time. While she had the first right of refusal, she could not afford the going price knowing the condition of the building. The property now has a new landlord, who bought the space to open a bar, she says.

"My lease is up December 2, and they're choosing not to re-sign us here," says Parker. "At first, they wanted us to be a part of it with them, but I don't really know them. I'd be afraid to give them the name if I didn't have control over what would happen to it."

When asked whether or not the Shanti will find a new home, Parker responds with an open mind, but isn't making any promises.

"I'm not going to say that I'm not going to look around for a place. We've had a few offers on other buildings -- just a beautiful outpouring of love from everybody. I'm going to take my time, and if the right place comes around, you'll see the Shanti again someday," she says.

The venue's slogan, "Never a cover... well most of the time," refers to the only night of the year deemed necessary to keep an eye on crowd control: Mardi Gras. The Shanti will wrap up its legacy in its cover-free tradition with a special final lineup of shows, culminating with a performance by the Schwag.

"That whole last week, I have people who helped me build this bar playing -- some of my closet friends in bands," says Parker. "That should be a memorable week."

There's still plenty of time to enjoy a drink in the courtyard. Check out the schedule for the Shanti's final shows below, and stay tuned for details on a flea market in the fall to claim memorabilia from the walls.

For its full calendar and additional information, visit the Shanti's website.