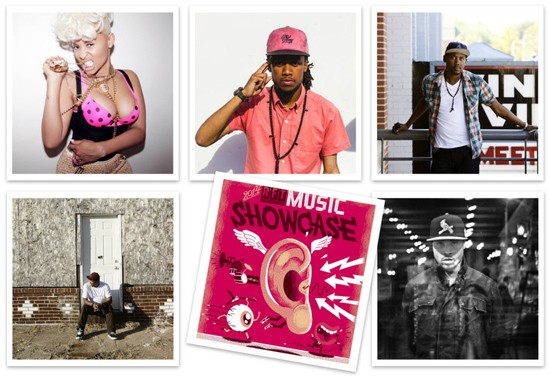 For those whose introduction to independent rap came through the Wu-Tang Clan and the Stones Throw collective, Black Spade is a friendly gateway to the underbelly of St. Louis hip-hop. The rapper has developed a voice that is at once unique and welcoming, and as a producer, Spade's predilection for vintage jazz and funk samples leads him to craft deep grooves that cause involuntary head-nods without pounding kicks and snares into skulls. As an emcee, Spade has honed a relaxed delivery to compliment his smart lyrical turns. Truly, his flow displays such musicality that he could read a phone book into a mic and make it work. -Ryan Wasoba

Mvstermind is a growing young talent -- a producer, rapper and frontman for St. Louis rapping and singing collective M.M.E. His most recent album A.D.D. (Artistically Day Dreaming) is just a taste of his clever wordplay, with the album's title referencing Mvstermind's childhood diagnosis of attention deficit disorder. His musical influence began at home with his father, and later grew with inspiration from musicians like John Coltrane, Lupe Fiasco and Kanye West. Mvstermind sees his version of hip-hop as a mosaic of different sounds which come together to create a diverse aesthetic. -Tara Mahadevan

Nato Caliph is a St. Louis rap OG, who got his start after hearing the Eric B & Rakim song "Microphone Fiend" when he was just seven years old. He's been rapping ever since, with an arresting cadence that propels intelligent conversation -- his rhymes focus on family, work and his community rather than turning up in the club. Most recently his song "The Id," from 2013's Understanding Understood, was featured on The Source's website. Caliph also occasionally teams up with fellow nominee Black Spade -- the duo released its first joint effort in 2012, Force Majeure, which features beats by Spade and raps by both emcees. -Tara Mahadevan

Of all the aspects of Tef Poe to discuss -- his outspoken nature, his constant hustle, his thought-provoking social-media rants -- let us not forget that he can rhyme his ass off. You don't get onto BET's Freestyle Friday competition on swagger alone, and you certainly don't return as defending champion for weeks on end without a sharp tongue and quick wit. And Poe's wordplay keeps improving on his newest release, Cheer For the Villain, another installment of sinister verses and steamrolling beats. A track like "Drinkin and Thinkin" shows zero compromises and still hits hard enough to fit on hip-hop radio. Tef Poe may or may not be the next big St. Louis rapper, but if he is, it will certainly be on his own terms. -Ryan Wasoba

Since pretty much the advent of the music video, but more likely since the advent of eyes and asses, popular music has been an arms race of sex, dance and attitude. As hip-hop artists go, Tiffany Foxx is a weapon of mass destruction. The St. Louis native's "street couture" (as she calls it) has won over the likes of Nelly, Akon and Snoop, all of whom she's worked with, and notably Lil' Kim, who signed her to the International Rock Star Records label. "Twisted," featuring Lil' Kim, may be one of her hottest and weirdest tracks, but the furiously feminist fuck-off-and-die-at-my-Versace-clad-feet anthem "Don't Trust 'Em" may be her definitive banger: "I'm married to the money 'cause the dick got a mind of its own." And so does Foxx. -Roy Kasten