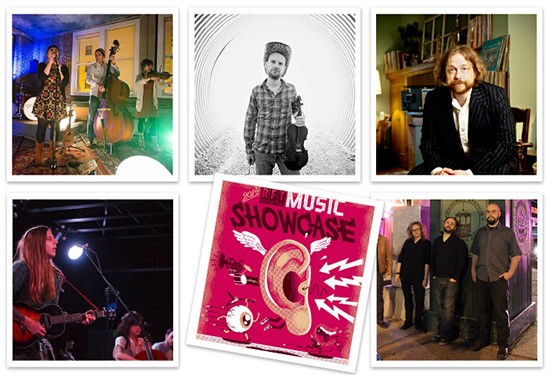 Kevin Buckley has never been shy about re-tooling Grace Basement; he's been the sole member of the band since its inception as a one-man rock group with the release pf still-stellar New Sense in 2007. Gunmetal Grey was louder and more ornery, though his turns of phrase and boundless gifts for melody and harmony shown through. So it wasn't a huge shock when Buckley and a new cast of players unplugged for the folk-driven Wheel Within a Wheel, but the resulting album and live shows felt like a culmination of everything Grace Basement has been moving toward since its beginning. -Christian Schaeffer

How do you discuss Indian Blanket without mentioning the Lion's Daughter in the same breath? Well, you don't. The pair collaborated for A Black Sea, a folk-metal record and last year's most intriguing local album. The unlikely combination worked because Indian Blanket's version of folk is dark, doomy and heavy in the same manner as Neil Young. There's nothing cute about principal songwriter Joe Andert's voice, an often twang-less tenor that lets the tragedy of his lyrics emote for themselves. Listeners who revel in the darkness of Will Oldham will find comfort in Indian Blanket, but those excavating these nominees to find a local foil for their love of Mumford & Sons are advised to look elsewhere. -Ryan Wasoba

For guitarist Gene Starks and vocalist/ukelelist Devon Cahill, Letters to Memphis began as a reason to learn and play the works of some of their favorite songwriters, including Jenny Lewis, M. Ward, Jeff Mangum and Camera Obscura's Tracyanne Campbell. When the duo started writing its own songs they were, unsurprisingly, in a traditional style, with elements of folk, country and blues. Now augmented by a full band and a steadily growing cache of fine original material, Letters to Memphis has become a fixture in the city's live music community. Songs like "The Oleatha Shuffle" (about the street where Cahill and Starks live) and "Rest Your Head" are whimsical, even playful in nature. However, it's the smokier, slower material, like "Time" and "Your Eyes and Mine," that really suggest great things in the near future. -Mike Appelstein

Ryan Spearman works hard to make it all look so easy. The guitarist, banjo player, singer and songwriter has his hands in so many projects, it's hard to keep track. He's hosted open-mic nights, taught folk music lessons, led square-dance hoedowns, recorded an album played on "recycled" instruments and started a new project with his wife Kelly Wells called the Aching Hearts. No matter the venue, Spearman's laid-back demeanor and omnipresent grin belies his command of all manner of folk-music idioms and his willingness to shape the music to his contours with an easy-going, husky tenor voice. -Christian Schaeffer

Email newsletters for bands at ReverbNation.com

The word "supergroup" is a bit of a stretch for the Union Electric. Still, the core of seasoned, prolific musicians Tim Rakel, Mic Boshans, Glenn Burleigh and Melinda Cooper -- along with a revolving door of quality guests onstage and on record -- does carry some hints of indie-rock collectives like the New Pornographers and Broken Social Scene. Where those examples can struggle for authenticity when dabbling in Americana themes (blame Canada), the Union Electric's Midwest roots shine through, even when the band's mind is elsewhere -- like the beach, for example, on the surf-rock indebted "From Bad To Worstward." The Union Electric may not be the folkiest folk band in the folk category, but it is the most effortless about its folksyness. -Ryan Wasoba