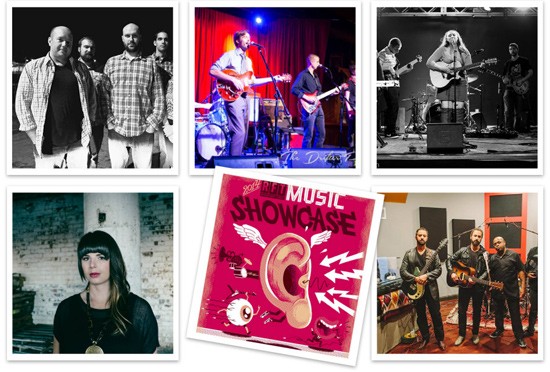 Beth Bombara seemingly has performed with everybody in St. Louis at one time or another, but lately, she has been doing her own thing, gigging with her solid band and taking her textured indie-alt-country tunes across the country. Though her bandmates are wonderfully proficient, Bombara's warm voice glows most fiercely when they step back and cede the full spotlight to her. On "Right My Wrongs," from the dazzling 2013 album Raise Your Flag, Bombara sings torch for a full 30 seconds before anything but a shaker or a few plucked bass strings comes in, slowly building the song's tension and interest. It's a powerful reminder about just how smart and deliberate of a songwriter Bombara truly is. -Allison Babka

Brothers Lazaroff masters a strain of American folk music that can't be faked, with a subconscious presence of blues and an unforced twang. The comparison between Brothers Lazaroff and Summerteeth-era Wilco is an obvious but effective one, although these not-actually-related Brothers seem uninterested in high-art experimentation. Last year's excellent full-length record Hope, Fear, Youth displayed a band who infuses an often formulaic music with jangle-funk jams and Springsteenian moments that easily reach further than the standard alt-country crowd. -Ryan Wasoba

Langen Neubacher's voice is hard to pin down. Maybe a less precious Eleanor Friedberger, or a folksy Kim Gordon? The music of her outfit the Defeated County is similarly defiant, a loosely organized exploration of dark folk themes with arrangements blurring the line between decisions and mistakes. It should be noted that Neubacher proudly owns the adjective "creepy" when describing her band. If "Americana" seems an ill-fitting category, just consider that whole melting-pot cliché -- easy to do, because Langen Neubacher mischievously stirring a cauldron is not much of a stretch. -Ryan Wasoba

When you take a name like the Dive Poets, you had best not take yourself too seriously. And yet seriousness of purpose for songwriter Eric Sargent and his veteran group of Americana players (including Anna Drexelius, Karl Eggers, and RFT Music writer Christian Schaeffer) doesn't undercut how much collective joy the group gets out of rocking Americana through the clichéd barroom doors and into the wide-open city streets. Last year the band released its second album, Married to Your Ghost, and showed that mature, well-crafted, roots-conscious rock & roll always deserves another round. -Roy Kasten

Last to Show First to Go

Last to Show First to Go defies categorization. The band expertly shifts from folk to alt-country to rock during any concert, on any album and even during any song. It's a lot of ground to cover, but singer/guitarist Bredon Jones' lyrics about life's messes tie everything together. Under the layers of guitar, cello, percussion, harmonica and trumpet, Jones' words offer sadness, cautionary tales and doubt without being dreary. It's transcontinental, thoughtful road-trip stuff, and at its heart, it gets at what "Americana" means after all. -Allison Babka