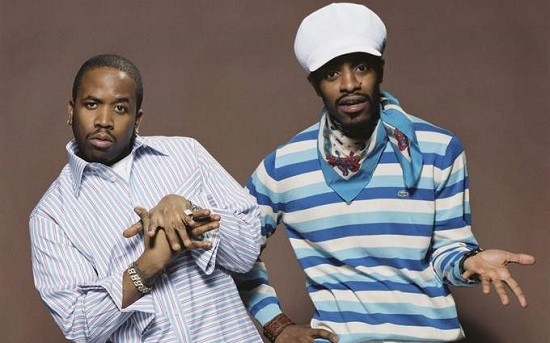 Outkast has made something of an art form out of cleverly describing its own level of "cool." Though the Atlanta duo is far from the first rap group to do so, Big Boi and Andre 3000 have certainly made a game out of it, employing all manner of wordplay in their explanations of the matter. "Cooler than a polar bear's toenails," from 1996's ATLiens, is likely the most well-known example.

Below, you will find a list of every single thing the members of Outkast have lyrically asserted themselves to be cooler than, along with carefully thought-out, scientific explanations. Let's dig in.

The Arctic Circle, native habitat of the polar bear, routinely drops below -58 degrees Fahrenheit. The region is blanketed in snow and ice, which the polar bear walks around on regularly, getting ice up under its toes and such. Therefore, it is reasonable to say that the polar bear's toenails, constantly caked in snow, are the coolest part of its body.

But, as Big Boi notes in this 1996 classic off of ATLiens, Outkast is, in fact, cooler than that.

The Pussy on a Penguin in the Summer

The summer is considered to be the warmest of the four temperate seasons, with the earth tilted in such a way that it faces the sun. The penguin is an aquatic, flightless bird whose native habitat is in Antarctica, an ice-covered continent whose temperatures sometimes reach as low as −129 degrees Fahrenheit.

Penguins have exceptionally short, stubby legs. Therefore, their anatomy is as such that their genitals are very low to the ground. Heat transfer, through a process of diffusion, would cause said penguin genitals to reach lower temperatures when in close proximity to the ice beneath them.

If one were to compare the frosty genitals of a penguin to the heat of the summer months, one would find the genitals to be considerably cooler than the season's temperatures. But not Big Boi, as he explains on this 2012 solo song. He is cooler than that.

Freddie Jackson Sipping a Milkshake in a Snowstorm

American soul singer Freddie Jackson was an important artist in the '80s and early '90s. He broke into the music world in 1985, making a splash with back-to-back hits "Rock Me Tonight" and "You Are My Lady." His soulful talent and slick style of dress would be defined by many as "cool."

A milkshake is a sweetened beverage that is served cold, often made with ice cream or milk. It was introduced to the world in the early 1900s, finding great popularity by 1930 or so. It is considered by many to be refreshing on a hot day, due to its low serving temperature.

A snowstorm is a weather event characterized by large amounts of snowfall. As discussed above, snow is cold, requiring temperatures to fall at least as low as 32 degrees Fahrenheit in order to exist.

Therefore, Freddie Jackson sipping a milkshake in a snowstorm would be an event that many would agree is "cool." But, surprise, not Outkast, as Big Boi states in this song from 2000's Stankonia.

To be "cooler than being cool" is defined by Andre 3000 as to be "ice cold," which follows logically given that "cold" is considered to be of cooler temperature than simply "cool." The additional descriptor "ice" drives the point home further, being that the freezing temperature necessary for water to become ice is 32 degrees Fahrenheit, which many would agree is pretty cold.

Most Players Claim To Be

A player, in this sense, is defined as one who is successful with the ladies, often characterized by his stylish manner of dress and calm, collected way about him. Most players would self-identify as "cool."

In 1996's "Two Dope Boyz in a Cadillac," Big Boi asserts that he is even cooler than the level of cool that these players claim.

Anti-Freeze Defrost on Your Window Pane

This actually doesn't make any sense, and you can thank Lil Wayne for that. He utters this line during his feature for the Outkast song "Hollywood Divorce."

The pieces are all there, but they are in the wrong order. Anti-freeze actually lowers the freezing point of a water-based liquid, and is not itself especially cool. Also it is not common for people to pour antifreeze all over their windshields; the chemical additive is most often used in the radiator.

So even though this is Lil Wayne nonsense talk, Outkast is still cooler than whatever it is.

All Other Motherfunkers on the Planet

It is unclear what a "motherfunker" is, as the term is without accepted definition in the dictionary. But in this song, released in 2000, Andre 3000 claims that he and Big Boi are "the coolest motherfunkers on the planet," which means that the two of them are thereby cooler than any other motherfunker that exists on Earth. Whatever that means.

All Other Individuals on the Planet

Three years later, as if its members understood that this situation warranted clarification, Outkast released this song, with the line "Some of the coolest individuals on the planet, we said." It would appear, based on this information, that a motherfunker = an individual, which would mean that Outkast is asserting itself to be cooler than any individual on Earth.

Outkast will perform at LouFest this year, held in Forest Park on September 6 and 7. You would be a fool not to attend.