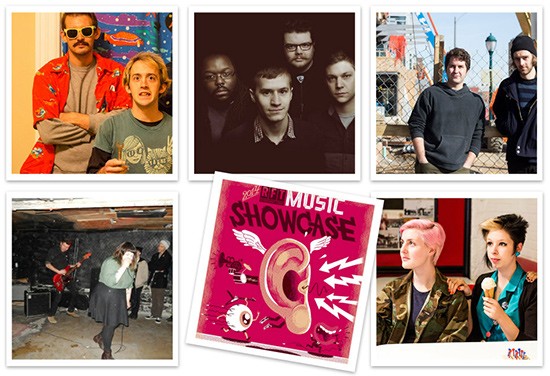 Rather than save their songs (and their dollars) to release a full-length, capital-A Album, the fellows in Con Trails are happy to work in short, frequent bursts. The duo, composed of Kevin Guszkowski and Luke Sapa, has released three EPs, each with two or three songs, each month. Every release finds the experimentally inclined band using guitars and drums to craft sometimes-creamy, sometimes-discordant songs that can float like shoegaze or hit like post-punk. The group's most recent release, Tunnel Prey, weaves in dark, muddy tones to offer up some brutality amid the bliss. -Christian Schaeffer

Elliott Pearson and Alex Petrone first landed on the scene in 2010 with their band Great Outdoors. That Best New Band nominee shed its leaves and left Pearson and Petrone to rake up the mess, bagging up what they could salvage to form Search Parties. Pearson rendered his wilted emotions unto Search Parties, and the music was weighed out on a grander scale. Search Parties' aural heft belies its indie-rock tag line. Pearson calls out with an arid vocal tone which can turn perceptively humid in the blink of a verse. Dylan Dougherty inputs staccato key arrangements that strike through the veil of Pearson's elastic vocal range. Danny Newgent's guitar tones manifest heady textures and coat the band in a drowsy haze of reverb. Petrone once again takes to a drumkit to coordinate fastidious rhythmic arrangements that keep pace with Chris Garner's bass and the band's live violinist, Gina Euygenhuysen. The final product is familiar and fresh at once, foreshadowing good things for the young group. -Blair Stiles

Self Help, the most recent collaboration from Ashley Hohman and Ben Smith following Doom Town's recent demise, combines elements of classic LA punk and the Brian Eno-produced post-punk of No New York in its latest cassette release, CS 2014 on Don't Touch My Records. Hohman, who has previously performed in the Vultures, Doom Town and Tone Rodent, stretches out on the tape, alternately channeling the trills of Poly Styrene and Exene Cervenca. Smith, Chris Eck (of Shaved Women fame) and Leo Jalipa create a danceable space for Hohman's moody vocals, which are more powerful and confident than her previous projects. The result is occasionally hair-raising and thoroughly satisfying. -Jenn DeRose

Raw Pop, the latest release from Times Beach, is best suited for play during a game of beach blanket bingo on the moon, preferably with a tire fire blazing in a crater nearby. As its succinct title suggests, Raw Pop incorporates punk and hardcore influences, which Times Beach members have intimate involvement from prior and current projects, with components of lo-fi pop and surf-rock. This mixture of genres creates a turbulent whirlpool of hypnotic hooks and sweet, swirling riffs that pull the listener deep into blissful oblivion. Produced by St. Louis ex-pat and pop-punk expert Mario Viele, Raw Pop is a gorgeous, must-own summer blaster, available on cassette or digital download. -Jenn DeRose

If the Shaggs had grown up with Casios, Donkey Kong and The Blair Witch Project, the band might have sounded like lo-fi experimental act Willis. The trio of sisters Milena and Bella Kanak, along with fellow St. Clair, Illinois, pal Paige Smyth, barely makes music -- unless you count chanting about Bobby Fisher and banging on a pot music -- but what they do make is truly original, in the way that the best spontaneous sonic weirdness can be. Even as the St. Louis underground experimental scene flourishes, the darkly funny, sometimes downright disturbing words, noises and loops made by Willis sound like nothing else in this town -- or any other for that matter. -Roy Kasten