Between hosting loudQUIETloud on KDHX (88.1 FM) and co-hosting his live interactive game show Loser at Heavy Anchor, Chris Ward hasn't made a lot of time for his Acorns to Oaks project lately. But when he does play, Ward holds nothing back. Flying mostly solo, sometimes accompanied by former St. Louisan Kate Peterson Koch, Ward summons the intensity of a full band when he strikes chords, stomps on a bass drum and emphatically hollers tales alternately hilarious, abstract and gut-wrenchingly sad. Acorns to Oaks employs folk strumming patterns and melodies, but pummels them with a fervor that's pure rock n' roll. Even quiet moments brim with emotion and always build to a thrilling conclusion. In short, Chris Ward is the perfect singer/songwriter for those who hate singer/songwriters. -Bob McMahon

This year Cassie Morgan has made a much welcome return to a more regular show schedule. Her sad, tender ballads have been a fixture in St. Louis' folk scene since 2008, so even a brief absence was considered auspicious. Fortunately, Morgan's hushed, legato voice once again graces local stages alongside her delicate fretwork and stirring, predominantly minor-key melodies. These features congeal into sweet songs that are often complimented by Beth Bombara's assortment of colorful instruments and harmonies by Melinda Cooper's crafty drumming (Union Electric, Town Cars). The additional players help round out the expansive sound featured on last year's A Day Longer seven-inch. That single showed how powerful Morgan sounds when going big, but her excellent songwriting shines on any scale. -Bob McMahon

Last November finally saw the release of Bang Bang Bang, the long-awaited debut album by pianist/vocalist Ellen Cook (better known as Ellen The Felon). A record of experience born out of a few turbulent years, Bang Bang Bang translated tragedy into a complex but danceable mélange of boogie rock, jazz, tango and slow balladry. All of the ornate arrangements are balanced out by a rocking left hand that pounds the low notes and a playful vocal delivery that make Cook's shows a blast. Showgoers can expect inspired covers and mischievous banter alongside her formidable chops. -Bob McMahon 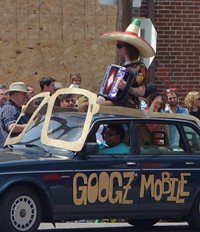 Part clever pop musician, part stand-up comedian and part performance artist, Robert Severson juggles as many roles as he does instruments when performing as Googolplexia. And oh does he juggle instruments! One song may be accordion-fueled French pop, the next a ukulele-driven rocker and the third a funky number made of nothing but stomps, claps and Severson's expressive voice. Good luck trying to ignore him as he saunters through the crowd, belting with impressive vocal range through his signature headset. All of these disparate styles are filtered through Severson's infectiously silly lyrical sensibilities, delivered with utter conviction -- and damn if those ditties about Mayor McCheese, paladins and dating zombies don't get stuck in your head. -Bob McMahon

Normally, you would be awarded zero points for noting that a young, female singer/songwriter comfortable on both guitar and piano is reminiscent of Joni Mitchell. Be real: Blue and Court & Spark are required listening for all, genre be damned. But on Lizzie Weber's debut, self-titled LP, she shows flashes of Joni's wit and knife-sharp emotional observations alongside gentle but sure-footed piano arpeggios. On the album, Weber works through the vagaries of early-twenties existential crises with an open heart and a clarion voice. She has recently begun airing these songs at locales around town with her backing band, the Magnolias. -Christian Schaeffer