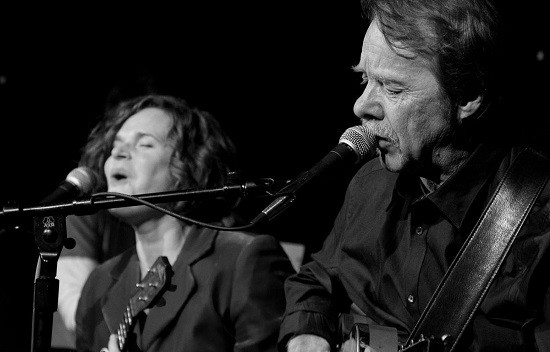 T&A, the new collaboration between Tom Hall and Alice Spencer, isn't really new at all. Both musicians have made a mark on St. Louis music that few veterans can match, and their friendship and work together go back to the '90s with legendary folk/blues band the Geyer Street Sheiks.

Now with The Kitchen Record, their first album as a duo, Hall and Spencer have officially rekindled a partnership that never really ended -- though Spencer has been living in Austin for the last two decades and Hall soldiers on as one of St. Louis' most accomplished guitarists. Hall and Spencer's long-time fans know what newcomers to T&A are about to discover: These are two of the purest musicians to ever draw breaths from this impure St. Louis blues air.

Hall and Spencer first met through the late Steve Mote, the de facto leader of the Geyer Street Sheiks, whose first incarnation had dissolved, toying with the idea of re-forming in the early '90s. Spencer was years younger than the rest of the Sheiks and had been planning on a career in musical theater until the rock band the Three Merry Widows lured her away.

"I was going to the conservatory at Webster University, and that is supposed to be the only thing you do," Spencer recalls. "Did I want to stay up all night, drink, smoke pot and have fun, or did I want to go to class and learn how to tap-dance? My choice was made. I didn't even finish my freshman year, much to my parents' dismay."

Spencer may have been introduced to the life of a musician through the Three Merry Widows, but that band, as successful as it was locally, never reached the national audience it hoped for. As the Widows courted major labels, Spencer was being courted by Mote, who was looking for a singer to re-energize the stalled Sheiks.

"Steve must have heard me sing somehow," Spencer says, "and he must have thought, 'She sounds like someone who should sing for the Sheiks!' Somehow I lucked into it. But I just loved the music. It was more closely related to the music of my family. It all felt familiar, but it was also totally new."

For Hall's part, restarting the Sheiks with a new singer wasn't high on his must-do list. "When we got back together I was a little leery, because it had gone so bad the first time, but by then everyone had grown up," Hall remembers. "I didn't know Alice, but it didn't take me long to realize she could sing. And she was good-looking and young. I didn't have to think too much about it."

Spencer signed up to do just one show with the Sheiks, a Halloween concert reunion, but they had put so much work into rehearsal that they decided to continue and eventually established a weekly residency at Riddle's Penultimate. Those gigs turned into a five-year run, "a magical time," as Spencer put it.

But by the mid '90s, the Sheiks' lineup lost any semblance of stability. Members quit, fought and died, and Spencer, newly married, departed St. Louis for Austin. Over the years she has performed with bands like the Barkers and Victrola. She still sings with traditional jazz pickup bands and also works for an advertising music house on commercial projects. And though she lives in a place with more guitar players than any city outside of Nashville, she has never met another musician quite like the original guitarist for the Geyer Street Sheiks, Tom Hall.

"Singing with Tom is so different from anything I've ever done," Spencer says. "I have been getting into the ukulele, and he was the first person to be supportive of that. And then the recording just fell into our lap. Danny Levin [who produced the album and has played with Asleep at the Wheel] said he wanted to do a record for us. It's very hard to get a compliment out of Danny. But when he heard Tom he was like, 'Wow. That is very cool.'"

The Kitchen Record features elements of jazz, blues, swing and R&B, all pared down to their essence. Some of the songs they've played for years, and others are new to their repertoire. All are driven by Spencer's warm, full-force gale of a voice and Hall's nimble resophonic guitar. Their version of the standard "My Babe" draws inspiration from blues legend Othar Turner, and they give Robert Johnson's "Phonograph Blues" a dark, eerie sound with Spencer moaning in response to Hall's weathered baritone. The music T&A makes is as close to the heart of the St. Louis blues as any that has ever been recorded.

"I've just never heard anybody like Tom," Spencer says. "He has an authenticity. It's not affected; it's genuine. And I feel like we have a chemistry that's hard to come by."

Tom Hall and Alice Spencer perform as T&A at the Venice Cafe on Thursday, May 15, at 9 p.m., and with the Geyer Street Sheiks at the Schlafly Tap Room on Friday, May 16, also at 9 p.m.